For Dana and Doug Englekirk, life is one happy uphill climb.
David Moriah 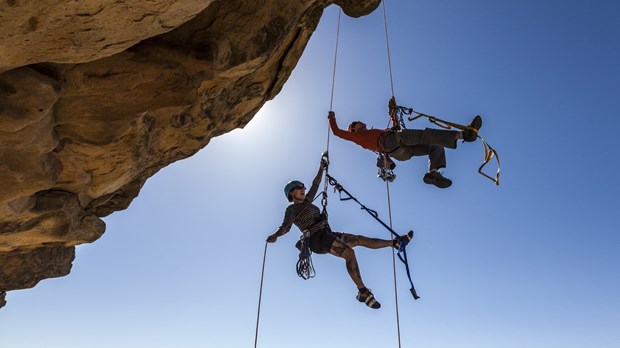 While the majority of couples feel most comfortable (and safe!) on horizontal terra firma, Doug and Dana Englekirk move quite smoothly in the vertical world.

Last year, the American Sport Climbing Federation rated Doug number-one in the rugged sport of rock climbing, which involves scaling sheer rock walls-with only minute bumps and ledges to hold onto-then leaning backward as the wall angles and finally reaching the top by climbing over huge overhanging boulders. You could call Doug the Michael Jordan of sport climbing.

"Sport climbing emphasizes the difficulty of staying on the rock without falling off," Doug explains. "So the walls or routes we climb are 80 to 100 feet at the tallest." He makes it sound easy, but the walls he's talking about are steep vertical climbs, with "holds" often less than an inch wide-and spaced far apart. It takes an outrageous level of fitness and coordination to climb such a wall without falling. Doug admits, "All your physical strength and endurance are pushed to the limit."

Since Dana is also a veteran rock climber, you'd think it was Doug's Spiderman achievements that first attracted her to him. But her initial interest had little to do with his ranking as a top climber. In fact, Dana says experience showed her that sport climbers "usually just want to talk about how great they are."

So two years ago she was surprised when she read an article about Doug in Climbing magazine. "His Christian character came through so clearly in the article," she remembers. "He was the exact opposite of the cocky climbers I'd known. He claimed God had allowed him the successes he'd had."

Dana was impressed with Doug's humility, but also with an unexplainable conviction that he was the man for her. She wanted to let Doug know someone was praying for him, so she found out where he attended church and went there for a Sunday service. Doug was out of town and missed church that day, but Dana met one of his friends, who passed her phone number along to Doug.

A week later, Doug invited Dana to go climbing, and they took along Dana's son, Nate, from a previous marriage. At age five, Nate was already a climber. Dana had been an instructor of troubled adolescents when he was a toddler. "I'd make Nate little harnesses and put him on the wall," Dana remembers. "It would totally inspire the delinquent-type students who thought they were too tough to try something new. If a two-and-a-half-year-old could do it, so could they!"

Nate liked Doug right away-especially his truck. "Ever since Nate could talk," Dana recalls, "he'd been praying for 'a king cab, blue, 4x4.' Then Doug drove up to our house in a blue, 4-wheel-drive pickup-with a king cab.

"But the first thing I noticed about Doug was that he listened to Nate," Dana goes on. "He seemed so ready to love Nate, and that was a real blessing to me. As we started seeing each other a lot, Doug would take Nate to McDonalds for an ice cream. Or Nate would say, 'I want to climb in your gym,' and Doug would make time to climb with him."

The couple quickly decided to marry, which surprised Doug's long-time friends. He had a reputation for being "very, very choosy" about the women he would date. But Dana felt confident when Doug's dad, a successful Los Angeles businessman, gave his stamp of approval. "He trusted Doug's decisions, including marrying me. Doug's family immediately accepted me and Nate."

The Englekirks took some time in premarital counseling. Then, on January 7, 1995-three months after they met-they tied the knot. As soon as they were married, Doug adopted Nate.

"I wasn't sure if I was exactly ready to be a father," Doug admits. "But Nate is a great kid, and he just seemed like a gift from God."

So How Much IS Your Life Insurance?

Turns out it's only outsiders who perceive rock climbing as ultra-risky. According to Doug and Dana, it's not such a dangerous sport. Dana claims she doesn't even worry about Doug. "I've seen him fall so many times," she says, "but he always gets caught with the equipment. My confidence is in the equipment and knowing that we know how to use it. We've both been climbing for about 15 years, and neither of us has ever had a serious accident or broken any bones from climbing."

This, from a woman who's currently walking with a limp.

"Surgery after a skiing accident!" she explains, laughing. "Actually, the only time I worry is when Doug is away on a long climb-like the big walls in Yosemite, where they climb for days, camping on ledges overnight. They go as fast as they can so they can carry less food and water. That's an extended period of physical exertion for Doug."

For herself, she only worries about snakes, which she hates. Well, so does Indiana Jones, and no one would call him a wimp.

Sport climbing is relatively new, so no one really knows at what age a sport climber might "peak" in competition. Right now the top ten American climbers range from 14 to 40. And Doug is convinced climbing will always hold challenges for him. "I'll try a route I won't quite be able to do without falling. Then I'll do it again and again until I can climb from bottom to top without falling. It's a great feeling of accomplishment-but there's always another goal to set immediately because there's always a harder route to try."

"That's Doug!" Dana laughs. "He is majorly motivated. He wanted to fly, and he was a pilot by age 18. He got his engineering degree from UCLA by the time he was 21. Even prayer. He'll be on his knees for hours, 'til I think he must be paralyzed in that position. He lives by facing challenges. He's got lifetime projects-rockfaces so difficult they'll take a lifetime to master."

Though not as dedicated to the sport as her world-class climbing husband, Dana often "climbs the walls" with Doug-whether she holds his safety rope or goes off to scale a portion of rock by herself. She has done well in a few women's climbing tournaments. Even Nate has gotten into sport climbing. At seven years old, he recently won "cool stuff" by taking first place in a tournament for his age group.

It's a Hard-Rock Life

Sport climbers typically lead a nomadic lifestyle as they "follow the sun," traveling to compete and train on rockfaces with warm exposures. So the newly formed family passed most of their first year together on the road.
"The toughest challenge has been finding time in my life for two other people," Doug acknowledges, "and often it seems there's just not enough. But fortunately Dana is a real 'pick-up and-go' type of person. We adjusted our schedule somewhat around Nate's need for schooling and friends. But Nate is a great traveler, too."

The Englekirks homeschooled (or "cliff-schooled") Nate last year, but this year his schooling needs have led them to put down some roots in Nevada. It's close to the beautiful home they own in the Mammoth Lakes area of California, it's a good base for Doug's work as a building contractor and it's ideal for seasonal outdoor training.

Yep, Doug works as a building contractor and still manages to train three or four days a week. He and a friend have documented that a training schedule of two days climbing and two days off works best. They train indoors using a gym climbing wall if weather doesn't permit outdoor climbing. How does he keep up such a rigorous pace and still find time for his wife and son?

"He does it all well," Dana insists. "This lifestyle wouldn't work if Doug weren't so stable as a father, as a spiritual leader." The family makes time for family devotions every day.

But Doug is quick to give Dana credit, too. "She and I are different," he reflects, "and the balance is good for us. I'm very concrete and organized; Dana goes with the flow. Through me she's learning to be more organized and disciplined. Through her I'm learning to be more free and discover a real, spontaneous friendship with God."

Dana gets the last word in.

"Whenever anyone asks me how married life is, I tell them it's great and getting better all the time. God is so good. I pray for Doug, and he prays for me. And it's working."

David Moriah is a freelance writer who has been involved in outdoor education for 20 years. David and his wife, Deborah, live with their two children in Hopkins, Minnesota.