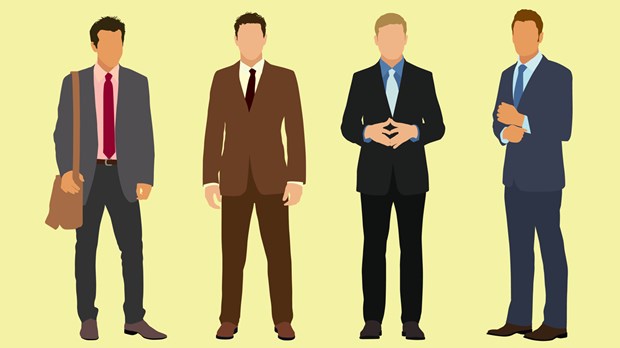 Note to all women about to read this article:
There's nothing here that would interest you. We men will just talk amongst ourselves as you make your way to another page. Maybe we'll share a nice cup of cappuccino while we wait. You know, get in touch with our feelings and all.

Are they gone? Good. This meeting of the Loyal Order of Confused Guys, Lodge No. 6723, will now come to order.

Guys, we have a problem. Everywhere we turn, society is telling us we need to become more "womanlike" in order to relate better to women. You can't watch a TV show or read a story to your kids without seeing some doofus husband totally mess up his marriage and family before his wife swoops in and saves the day with her superior relational skills. Even in the workplace, guys are considered cavemen when we don't relate to women the way other women do. Basically, guys are considered inferior just for being, well, guys.

Sure, we'd all agree that men and women approach life and relationships differently: Men just want to get the job done—focusing on tasks and goals. Meanwhile, women are intensely interested in the process of getting there. But who decided that the female approach is the correct one and that men are just a bunch of sex-crazed, relationally impaired bozos?

To find some answers, I rounded up four of the most regular married guys I know—Doug, Jim, John and Keith—each married at least ten years. We spent the better part of a Saturday morning hammering away at this problem. Not only did we reject the "men need to become women" idea, we also came up with a Guy Manifesto that made sense even when I read it to my wife.

But I'm getting ahead of myself. First, let's agree that popular culture, and even some Christian authors and speakers, are sending men a one-sided message: namely, that we need women to give us a clue.

"We're being sold a bill of goods," says Keith, a graphic designer. "For years, I just went along with it. Then all of a sudden I said, 'How come nobody's up there telling women that it's not so important to talk about the process?' Why does that sound absurd, but telling men they need to change sounds reasonable? I'm not saying I don't want to understand my wife better. But why are we being told that we've all got to move over to the women's side and communicate like them?"

Counselor H. Norman Wright, the highly regarded author of scads of books on Christian marriage, agrees that men don't have to turn into women. But he does feel we need to step outside of our male nature from time to time.

"Both men and women are called to change," he told me. "But men tend to be more defensive. They don't realize that they can stay the way they are and add to it another way to relate. … They can expand.

"If you go to Scripture," he adds, "1 Peter talks about consideration and understanding as part of the biblical model of leadership. The changes are for our benefit."

In other words, men become more Christlike and have better marriages as we work to understand what makes our wives tick. And the same is true for our wives in relation to us. Change is a two-way street.

What does this mean for men? Sometimes, it's as basic as understanding what our wives want. Women frequently tell us they want us to talk to them more … but on their terms. For instance, when they tell us about a problem, they're probably not looking for us to propose a solution. They just want someone to empathize with them.

"Don't give suggestions or advice," Wright counsels. "Listen and reflect her feelings. For example, your wife tells you about a problem and you respond with, 'That sounds like it's really important to you.' And you do that without looking at your watch and without one eye on the TV."

Okay, we could give that a try. But let's admit that it's not as easy as it sounds. Guys spend most of their time in a goal-oriented mindset, whether it's at work, fixing things around the house or watching a baseball game.

"My wife will come in and I'm already doing something," says John, a physician. "And she wants to go into her mode and talk about something. I just can't switch that fast."

"I can do it," adds Jim, a counselor. "But I have to have absolutely nothing else in my mind. Lots of times that's about 9:30 or 10 at night. I'm ready to be process-oriented, but my wife is asleep already."

Can We Talk Here?

Willard F. Harley, Jr., author of His Needs, Her Needs (Revell), says conversation is a basic emotional need for most women. But it's nowhere near the top of the list for most men. That's why we can afford to bend more than our wives in this area. We could gently suggest, though, that our wives think more carefully about their timing.

"All day at work I have to listen to what people are saying," says Jim. "Then I get home and ask a simple question and my wife gives me ten times more detail than I want. The problem is, how do I tell her I don't want that kind of detail without her getting mad at me or feeling hurt?"

That may simply be a matter of understanding how each spouse relates.

"For the first five years of our marriage," Keith says, "I'd come home and Karen would say, 'How was your day?' And I'd say, 'Fine.' That would drive her crazy. Now we've developed our own language to where that makes perfect sense. She understands that if I felt like talking about it I'd talk about it. Or at 10 o'clock that night I might say, "You know what happened today?"

Difficult as it is to overcome the barriers of timing and detail, there's an even tougher obstacle. Of course, I'm talking about the male and female approaches to sports.

Take figure skating. Please. Most guys I know can't watch skating with their wives without commenting on the judging (it's totally rigged). They also can't help but voice their wish that the skaters would fall more (it'd be better drama). And it's impossible not to comment on those sequined outfits some of the male skaters wear ('nuff said).

"The judges drive me crazy," Keith says. "In basketball, the ball goes in the hoop and it's two points. In skating, the top two skaters can finish the competition with one ahead by a tenth of a point. But it doesn't necessarily matter because of what some announcer calls 'the organic nature of the judging.'

"The skater who everybody thought was behind actually wins. My wife is watching the process of skating and how pretty it is, and I'm going, 'That can't happen. How could she have won?'"

According to Harley, it's better for husbands not to watch figure skating than to make fun of it while watching. But, he adds, the more compatible you become with your wife, the more you'll enjoy watching skating with her—not because of the skating, but because you love doing things together. The same goes for your wife watching the World Series or the Super Bowl with you.

Basically, guys are considered inferior just for being, well, guys.

Finding things you both enjoy is a process, but Norm Wright agrees it's a necessary task. And it requires a few adjustments. For example, go ahead and enjoy watching the World Series with your wife. Just don't expect her to "connect on the level you're at." Also, he advises, "a guy should then be willing to learn something his wife enjoys." Oops.

In my marriage, that would be shopping. I have the ability to actually enjoy shopping with my wife, but I have to shift into that mode. And no children can be present—it has to be a date-like atmosphere. I have to set aside a solid two hours to do nothing but shop. Otherwise, the female approach to shopping drives me crazy. My friend Jim is the same way.

"My wife assumes if you go buy a gift for somebody, it doesn't matter if you find what you want in the first minute," he says. "You have to shop for like an hour before it's an important gift."

In contrast, most guys I know employ the search-and-destroy technique.

"I'll go through hardware catalogs and ads for three weeks," says Doug, a sales manager. "And all of a sudden at 9 o'clock some night I'll jump up and say, 'I'm ready.' I walk in the store, I buy it, I walk out. Ten minutes."

So what makes the woman's method better? Actually it isn't. It's just different. For some couples, shopping can become a form of recreational companionship, which, according to Willard Harley, is a basic need for most husbands. It's entirely possible to go shopping together and have fun doing it … even if one of you shops and the other hunts.

The key is to give each other's feelings, preferences and needs equal weight. Then, instead of always going off in separate directions, find a few things you can do together. In the process, you'll create a lifestyle that benefits both of you.

This works best when you understand that your basic emotional needs differ from your wife's. Harley says men want these things most from their wives: sexual fulfillment, recreational companionship, physical attractiveness, domestic support and admiration. Contrast that to what most women want: affection, conversation, honesty and openness, financial support and family commitment.

Here's one reward: The better we relate emotionally to our wives, the better they'll meet our major needs. And don't let our confused culture mandate how you act. Women don't want their husbands to behave like cavemen, but they don't want wimps, either.

"You always hear about differences being so bad," says Doug. "That's why we're in this androgynous state. We were created differently for a reason. Acknowledge that and then find fulfillment in those differences. I will function in my created role, as God intended."

Okay, it's time for Keith to recite the Guy Manifesto—not to be confused with the big-band leader from the forties.

He is man. Hear him roar.

Jim Killam is a free-lance writer and journalism instructor at Northern Illinois University.