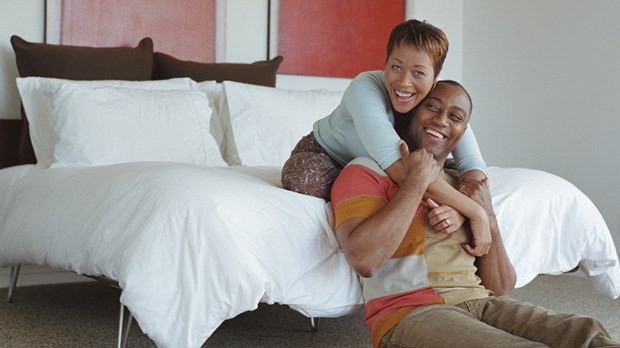 When it comes to sex, most married Christians just do what works for them. If they have been blessed enough to have discovered something that brings satisfaction, pleasure, closeness, and climax, they most likely will continue that practice. However, some are plagued with guilt because they wonder if what they're doing is sinful.

TCW receives many, many questions from Christian couples who want to know what is and what is not okay to do sexually. Unfortunately, churches tend to ignore this issue, small groups usually don't talk about sex, and most Christian books deal with more "spiritual" ideas.

Wouldn't it be nice to have a list of sexual practices categorized by "sinful" or "okay"? Is there such a list? Would everyone agree with the list? Is there a solution to this dilemma?

We think the answers to those questions are: yes, no, no, and probably not—in that order. We'd really like to create such a list that could settle once and forever the niggling doubts about sexual practices. But that's not possible. Different communities of Christians have different understandings about sexual practices that are based on a few general biblical principles. No list would be accepted by all Christians. Still, we do want to provide some guidelines that we hope will help you enjoy the gift of your sexuality to the fullest. That's what we're convinced God wants for each of his children.

We doubt that God's surprised by the intensity of our sexual desire or of its fulfillment. Seeing us enjoy the passion and pleasure seems to fit with his creative nature. There are some definite boundaries, however, that were identified through his Word. These are established to protect and enhance the maximum enjoyment of the gift. We think it's like our giving our kids bicycles. We'd teach them the safety rules right away so they could delight in the ride without being run over by a car on a busy street.

First, we'd like to point out the obvious—the Bible is not a manual on sexual technique. We've heard some people say that Song of Solomon describes acceptable sexual positions and behavior. We see it as a poetic love song that clearly embraces the joy of sexual play. We don't think it is an attempt to outline any specific sexual practices.

Second, we want to emphasize again that there are some specific sexual behaviors that are forbidden in scriptures. Adultery, that is having sexual intercourse with another person's spouse or a partner other than your own spouse, is a sin. Jesus, in the Sermon on the Mount, deepens the importance of marital faithfulness by extending the prohibition of infidelity to include a lustful thought life as well as the physical act of intercourse. Looking into our minds and hearts is an important principle for safeguarding the delights of intimacy.

Scripture is also clear about the evil of fornication—premarital sexual intercourse—which most of our culture accepts as normal and irresistible. We see many couples suffering from the consequences of their early promiscuity. The "sexual freedom" of our time isn't free and usually carries some pretty heavy costs.

And last, there is a vast array of possible sexual practices for married couples that are not mentioned at all in Scripture (we can find no reference to Internet pornography, vibrators, or videos). So, since we aren't likely to find a definitive answer, the best we can do is find the principles God has given us and apply them to the cultural setting we're living in. As we look for those you may not be surprised to find that we're not much different in the twenty-first century than how mankind has been since creation. We have the same anatomical equipment, the same physiologic hormones, the same mental capacity for lust and fantasy, and the same relational needs that have always driven men and women to seek sexual pleasure and intimacy. As Ecclesiastes says, "there is nothing new under the sun," except maybe the vast array of new toys.

Many studies have confirmed what biblical commandments imply. That is that becoming one flesh with one partner provides the best setting for satisfying sexual intimacy. Sex is neither a spectator sport for group indulgence nor an event to test a person's ability to score with multiple partners. Casual sex as a way to prove one's prowess or simply achieve physiologic relief of sexual tension only confirms that his or her ability to copulate is intact. Although providing some pleasure, it fails to meet the deeper need for intimacy that sex was designed to give.

A couple in a long-term committed relationship enters into a more secure and trusting territory with each sexual encounter. In that bed sex can truly become "making love" rather than just having sex. Multiple partners create mistrust, performance anxiety, and comparison evaluations that are barriers to the deepest levels of intimacy.

It is obvious to most couples early on that men and women are significantly different in their sexual interests and drives. Men usually have a desire for more frequent sex and greater variety in forms of sexual play. Women usually want more emotional connectedness through tender touch and conversation and prefer more consistent love-making technique. These differences often lead to tension over positions for intercourse, frequency of sex, and experimentation with different sources of stimulation.

This creates enormous opportunity for a couple to develop mutual submissiveness in their relationship. Each individual will have ways to show respect and give a meaningful gift of love to his or her mate. We feel that giving that respect to each other is a huge way to guide your choices of sexual play in the direction of genuinely mature love.

Doing only what is mutually agreeable sexually means that each partner will make sacrifices for the sake of intimacy. A wife may give herself more frequently or try a variety of sexual experiences that go beyond her comfort zone. A husband may relinquish some sexual fantasy or adjust his demands for intercourse twice a day just to show love to his mate. Those exercises in personal restraint are not easy, but help build the oneness of intimacy.

Sexual play should be enjoyable! If an activity you're doing doesn't bring enjoyment to both partners it will cause resentment and distance between you. That's not part of the design for "becoming one flesh." It may be that some forms of your sexual play create pain for one or both of you. That should be evaluated medically. If something is creating discomfort, it is probably treatable (such as vaginitis or painful erections). This can certainly produce barriers to intimacy.

At times couples may want to explore the areas of sado-masochistic sex or bondage fantasies. We feel that these behaviors move sex out of the arena of selfless love into that of power or domination fantasies. In those neighborhoods sex becomes an invasive, controlling behavior in which one person is violated. That is a sexual perversion and is likely to create shame, humiliation, and ultimate devaluation of one (or both) partners. When domination is a necessary ingredient for sexual pleasure there tends to be development of tolerance to the level of excitation. Hence increasing levels of the stimulation are required for the same sense of gratification. This is seen in its extreme in pornography that includes rape and even murder as forms of sexual stimulation.

Unfortunately, that ain't necessarily so. One of the most destructive forces we're seeing these days is the increasing frequency of sexual addictive disorders. When having sexual release becomes an addiction driven to levels of compulsive behavior, the relationship with a marriage partner may be replaced with various stimuli that are essentially fantasy based. We have seen men deeply hooked on Internet pornography (or other forms). They are compulsively driven to increasing exposure to pornographic stimulation and masturbatory release of sexual tension. We have seen women equally hooked on romance novels or chat-room sex talk for sexual release. These disorders displace the relational dimension of sexuality.

Marital sex, if maintained at all, takes place mechanically with mental fantasies from the artificial relationships providing the only sexual stimulation. That robs marriage of the most crucial part of intimacy—the blend of relational and sexual connectedness.

We delight in sexual playfulness and creative ways to pleasure one another, but unless it is not physically possible for a couple, we think nothing you do should completely replace genital union. The symbolism of having the embrace of vagina to penis and total giving of the erect penis to the welcoming vaginal canal is a recurring reminder that we were created for each other. The intimacy of that connectedness should awaken our most primitive desire for oneness. To enjoy sexual release in that most passionate form of embrace welds us into oneness like few other experiences.