A real-life story of a marriage in recovery
Gwendolyn Denvers 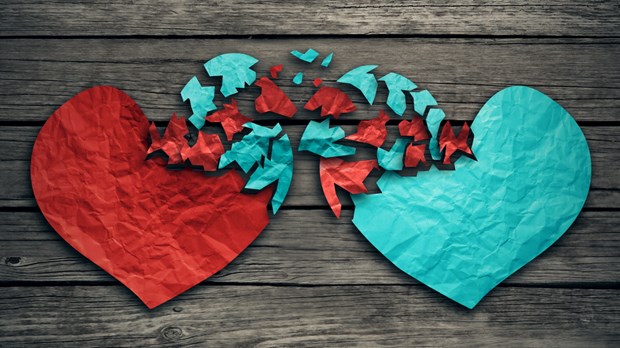 We were the "perfect" young couple by all outward appearances. Tony and I met at college. We married in the late 1960s and had three children in the early '70s. We truly loved one another, had great Christian friends, and our lives revolved around church-based activities. During the initial year of our turbulence, we were both Bible study leaders, we worked with the youth in our church, and we served on a number of Christian committees.

It was in this environment that a (married) church friend began to flirt with me. I was very taken with this because he was financially and socially established, in stark contrast to my husband and me. We were in the midst of preschoolers, my husband's frequent business travel, and financial stress. Nothing was especially wrong with our marriage—even as I look back carefully I know that we loved each other—but it did lack romance (or time for romance). With three preschoolers and the busyness of life, Tony and I had become efficient roommates. Our relationship had lost its zing. So it was fun to be flirted with again. It made me feel worthwhile, cute, fun—something other than an unappreciated mother and roommate.

At the same time another couple we hung around was struggling with infertility. She began confiding her problems to us and (as I found out later) to Tony. She was younger and flirty and needy. Tony was drawn in; she made him feel handsome, manly, and desirable.

After playing with fire, we two "strong" Christian people who knew better, who knew it was wrong, independently began extramarital affairs. Though we were each praying that God would stop us, God is a God of free will, and he allowed us to make our choices. Satan is truly the great counterfeiter.

Our marriage was still a good partnership arrangement, and we were both successful in living double lives. We weren't fighting or arguing any more than usual, but we both recognized that things weren't rich and full between us. I didn't spend time comparing Tony to him—life was too busy. When I wasn't taking time to be the "other woman," I had to move fast to keep up the wifely pretense and activities. Apparently, Tony did too. In our guilt, we became shorter with one another and more accusatory—even in jest. I remember almost being relieved when the phone would ring and then go dead—it wasn't him calling. I'd say jokingly, "It must have been your girlfriend." I never in a million years believed it actually was.

Jesus' comparison of us to dumb sheep is poignant. Looking back, I feel like a royally dumb sheep in so many ways. Questions of logic as well as emotions flood my mind as I try to rethink all of this. Where did we think this would go? Where did we think things would end? What on earth were we thinking? Were we just blind—and deaf—and dumb? Yes. All of that. We were two "smart," logical, faith-based people following the wiles of Satan blindly into the pit. We fell for the fun, appreciation, prideful attention, and the excitement. We were dumb in the dumbest way while appearing smart to the world and to each other. Neither of us realized the degree of the fire in the pit we were walking toward.

After about nine months of the affair, I was so overcome with guilt and confusion that I finally confessed to Tony. He immediately confessed to me. We were both devastated. The moment of confession came in October. We were out of state at the time, visiting Christian friends. I certainly wasn't planning on confessing. I didn't have a plan for anything. But, at some point that weekend, I told my friend what was going on, and she insisted that I tell Tony immediately. So, I went upstairs in their guestroom and ruined what was suppose to be a really nice weekend. And then he confessed too.

When it all came out, there were tears, rage, guilt, accusations, spontaneous phone calls to the "others," challenges, ultimatums, judgments, more tears, and a huge release in making love amid the tears. (I think the term "stranger than fiction" could apply here.) We knew that our marriage was too valuable to throw away, and we knew we wanted to do what was right before God, but neither of us felt it could be totally fixed. There was too much water under the bridge, too much hurt, too much of a violation of trust, too much closeness in our circle of friends, too much of everything bad. Only God's will could make it good again.

When we returned home, we knew we needed counseling (duh!, as my kids would say) and sought out a Christian counselor. He was God's provision for us as we tried to be faithful. He met with each of us individually and together. He consistently pointed us to the Bible and what God intended for marriage. He restored our hope—in God's promises and in God's ability to do the impossible. As I look back, this was the key: hope, not in either of us but in God. If he could redeem sinful people, surely he could redeem our marriage. We had one other couple that we confided in. The wife was my other saving grace. She listened to me for hours on end, always without judgment, but consistently encouraging me to follow the advice of our counselor, and the will of God. Tony didn't talk to anyone except our counselor and didn't seem to have the need to talk that I did. Our counselor wanted us to change churches since both of our "pasts" were involved at our church. This was harder than just attending somewhere else, as our entire married life had been centered around that church—spiritually and socially.

During all this confusion and chaos, I got pregnant while on birth control. We saw this as God's intervention and realized he was reconstructing our family. (I have to admit that I sometimes thought it was more of a punishment than a blessing.) That's when we decided to move. Since we needed to change churches anyway, this seemed like the easy answer to all the "why?" questions. Our goal was to recover our marriage, and we felt we had to pay whatever price was necessary. Although moving seemed to be the easy way out in some regards, it added to our stress level, as I was still struggling emotionally, much more than Tony, with the whole thing.

The Bible verse that I clung to in my deepest times of depression was Ephesians 6:12 (paraphrased), "For my struggle is not against flesh and blood [Tony, his past, my past] but against spiritual forces of darkness." I had to keep my eyes and mind focused on the real enemy, Satan, as well as the real victor, God himself, working in my marriage.

Restoring trust in each other also took time. The greatest thing we did was signing a covenant agreement with each other, in the presence of our counselor, that we would never entertain the idea of infidelity—physical or mental. We knew we each meant it. We prayed together. We spent a lot of time together with the kids. (We didn't have many friends in our new neighborhood or our new church, so this part was fairly easy.) Slowly the tears and the anger lessened.

Was God faithful? Absolutely. It was an almost unbearable time. Did we recover? Absolutely. If I signed my real name to this, our friends today would be shocked and amazed. People are always telling us that they love to see us together, that we seem "so in love." We are in our fifties now. By anyone's measurement, we have a marriage that is more than grand. We are deeply in love. We have lots of fun together. By God's grace we are active in our church and other ministries. We have talked about telling our children, but so far there has been no reason. We have also talked about counseling other couples who are recovering from the same sin, but this article is our first attempt at allowing God to use it for someone else's encouragement.

God has, in his bountiful grace, given us back a marriage that is "exceeding abundantly above all we could ask or think." That is his promise—for everyone, and he always keeps his promises! We know.

All names have been changed.

Gwendolyn Denvers is a pseudonym.

© 2001 by the author and Christianity Today