I grieved the baby that never was
Joy-Elizabeth Lawrence 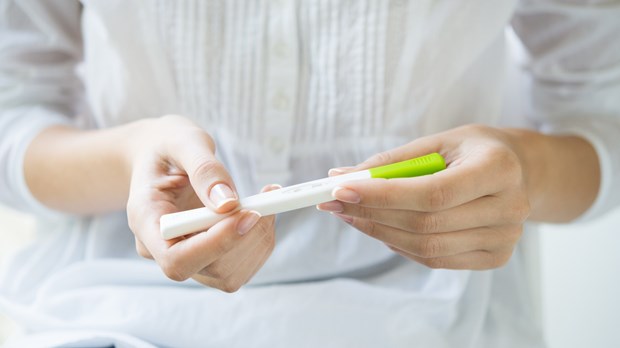 When the second pregnancy test showed a faint blue line—more line than the first one test, enough line to ensure to my obsessive self that I was, indeed, pregnant, my husband, Justin, embraced me.

"If it doesn't die," I replied, immediately feeling guilty.

In the nine months since then, I've wondered why my macabre sense of life's realities had to rear its head in such a moment of joy.

But there were other moments of joy too: telling my parents on Christmas Day; buying What to Expect when You're Expecting; checking name books out of the library; going to my first, second, and third doctor's appointment; slowly putting away my bras as I grew out of them.

One stormy Saturday, we went to the Salvation Army and picked out several unisex baby items that were on sale—a yellow cardigan with a sailboat (Justin loves sailing), a tiny yellow romper, a onsie that said, "50% Mommy, 50% Daddy, 100% Cute." I folded these up and placed them in the baby's future room, which we were calling "The Yellow Bedroom."

We were set—not too young, not too old, both with jobs, healthcare, a yellow bedroom, and excited grandparents.

At 11 weeks, we were ready to tell the rest of our friends and family. We devised a plan: We'd photograph three sweaters (mine, Justin's, and the yellow one) and three sets of shoes (the same) in our entryway. Then we'd send this photograph with the message: "Coming, August 2008: Baby Lawrence."

It was simpler (and assumedly cheaper) than my first grand idea, which was to put the announcement on a local theatre marquee and photograph it for our friends and family who live out-of town.

Friday night, right before my twelfth week of pregnancy, I was at rehearsal for a small student-produced collection of Shakespeare scenes at the college where I work. I went to the bathroom and noticed that I was bleeding. I remembered my three visits to the doctor's office. "Have you had any bleeding?" the nurse would ask. "No," I'd reply. "Are you sure?" she'd ask. "I'm sure," I'd say.

A lot of women at this office must lie, I'd thought, because she was just as insistent about asking me if I was smoking. "No, I'm not smoking," I'd say. "Not just one little puff?" she'd ask. "No. I don't smoke. I've never smoked. I think it's a disgusting habit," I'd say. "Are you sure?" she'd insist.

I hadn't smoked, but I was bleeding. Bleeding was on the long list of things about which I should call the doctor's office. I left the bathroom, told my director I needed to leave, and rushed home.

That night and the next morning were filled with confusion. My doctor's office was closed, so I called the number they'd given me. And I waited and waited and waited. I waited while a mechanical voice talked to me on the phone. I waited while wondering if something was happening inside my body that wasn't normal (apparently, it's normal to bleed a little during pregnancy).

Finally on Saturday morning, after being put on hold for 40 minutes, I reached a nurse who started to put me on hold again.

"Don't put me back on hold," I said. "I can't take it anymore. I've been on hold for 40 minutes and it's very dehumanizing to be bleeding while listening to hospital advertisements about the latest cosmetic procedure."

She told me to go to the emergency room.

"What seems to be the problem?" nurses and physician assistants asked me, one after another in the emergency room.

"I'm pregnant and I'm bleeding. I'm afraid it may be a miscarriage," I told each new person. Finally, someone put me on a gurney and wheeled me to the sonogram room.

The sonogram technician put the cold goo on my abdomen and rubbed the wand on me. We saw something on the screen, and the technician went quiet.

Finally she said, "I'm not your doctor, but from what I observe, there is no fetal pole."

"It's sort of the center of life," she explained. "It doesn't look like the fetus developed properly. This stopped developing at eight or nine weeks. You tested pregnant, but this is a mass of cells. I'm sorry."

That's what everyone says: "I'm sorry." I don't blame them, of course; what else can they say?

Others say, "You'll keep trying, right?" as if they're suddenly way too interested in our sex life.

Some have suggested that we give it a name.

"I keep thinking about that poor baby," someone else wrote to me.

I didn't know what to say. It wasn't as if our infant had died, or like one of my friends, I had delivered a fully-formed five-month-old stillborn child. This was a mass of cells with no fetal pole that had stopped growing.

I just kept thinking about the fetal pole, that primary indicator that tells doctors and sonogram technicians that, yes, the fetus is alive. But my baby never had a fetal pole, though it was growing at some point. So I don't even know if I was truly pregnant, though the changes in my body seemed to indicate that I was.

So August arrived and, had the pregnancy been with a normal fetus with a pole, I would be truly great with child. I wouldn't be wearing my tiny summer yoga tank tops. I would not have spent a week in theatre training out-of-state. I wouldn't be riding my bike everywhere. I'd be very hot and very still. My feet would be swollen.

And that, I think, was the saddest time of all.

When I started bleeding, I cried from the shock of it all. But that Saturday night in the emergency room, under the influence of some prescription painkiller, I didn't cry. I didn't cry as I lay in bed, drenched in sweat and shivering. I didn't cry as I passed, what seemed like, several pounds of blood and tissue. I didn't cry when my husband lovingly cleaned the blood off of me in the middle of the night. I didn't cry when, several weeks later, an acquaintance looked around our house and said, "Well, you're ready for kids."

But sometimes, I cry when I'm alone at home during the day. While I write, or cook, I wonder how my days would have changed with an infant. An infant now, not in the future, not in some other potential well-gotten pregnancy.

I thought being a mother would happen to me someday before I was 31 and had been married eight years. Women get pregnant all the time, everyday—some of them while using birth control.

Now, we're faced with the reality that it may not be that easy for us. After a night of bleeding in early February, I'm certain that several other late menses followed by chills and heavy bleeding were, indeed, other miscarriages I experienced in the last few years.

Does not the Bible teach us that, ultimately, God is in control? That God gives and takes away? In the first chapter of Job, the man from Uz loses everything: livestock, servants, and his ten sons and daughters. And how does he respond? "At this, Job got up and tore his robe and shaved his head. Then he fell to the ground in worship and said: 'Naked I came from my mother's womb, and naked I will depart. The LORD gave and the LORD has taken away; may the name of the LORD be praised" (Job 1:20).

My sister reminded me about the stories in the Old Testament of barren woman being blessed by God. In 1 Samuel 1, for instance, Hannah's womb is first described as "being closed by the LORD," but later God remembers her, and she and her husband conceive Samuel. And then, of course, there's the Virgin Mary, reminding us that God can conceive any child in his time.

This gives me some hope—not hope that I'll necessarily be a parent someday (Not all barren women are, and Hannah's story is not necessarily mine), but hope that God knows what's happening and that God will provide.

Joy-Elizabeth Lawrence is a freelance writer, performer, and godmother living in the Midwest with her husband. She is currently working on a manuscript that examines Christians' responses to lost pregnancies and infertility.