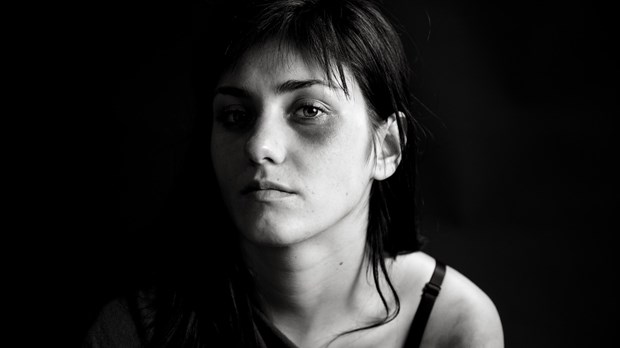 She could be the mom you always bump into while picking up your kids from school. Or perhaps you see her every week at the gym or during Bible study. She might be sitting a few cubicles down from you at work. She may even be a family member. And whether you recognize it or not, she's experiencing abuse.

Nearly three out of four Americans personally know someone who is or has been a victim of domestic violence, according to a 2006 Allstate Foundation poll. Additionally, The National Coalition Against Domestic Violence reports that one in every four women will experience domestic violence in her lifetime. This number often excludes incidents of sexual, emotional, or economic abuse that go unreported. In most cases, women in these situations either feel too ashamed to expose their abuse or fear telling someone won't make a difference.

Sadly, Christian women aren't exempt from these sobering statistics. The question isn't whether domestic abuse is happening within evangelical circles, but how fervently friends, family, and church members will address it, says Leslie Vernick, author of The Emotionally Destructive Relationship (Harvest House). A Christian therapist in Pennsylvania, for the past 28 years Leslie has counseled women in abusive relationships. Here, Leslie shares how we can recognize abuse in the life of a loved one and most effectively help her find the healing and resources she needs.

What are the signs of abuse we should look for in a woman's life?

The wife of a verbally or emotionally abusive spouse is one whose self-esteem has been diminished by constant criticism, blaming, name-calling, mocking, manipulation, public embarrassment, or humiliation. She may become more withdrawn and isolated under her husband's control. Or she may always seem anxious or uncomfortable, worrying about how her spouse will treat her in front of others or what he'll think of her comments. Essentially she's lost the ability to think for herself or have her own opinions. She's always wondering, Can I say that? Is that okay? She's not free. She's been robbed of her power to choose, which is a basic right God gives every person.

As a result, she functions like a child instead of a grownup. So if you ask her to go to the movies or invite her to a baby shower, it's as if she has to ask permission from her husband to go. This also happens with economic abuse, as a husband either strictly limits the money his wife can receive or withholds it altogether. She may always have to account for the money she spends, or she may never seem to have the money she needs, even for basic necessities like clothing or food.

A victim of physical abuse may always seem to be mak-ing excuses for injuries, such as bruises, dislocated or bro-ken limbs, burns, or even bite marks. She may go out of her way to cover her wounds, wearing long-sleeved clothing in summer or uncharacteristic hats to hide bruises around her face or hair that's been pulled out.

If we suspect abuse, how should we broach this sensitive subject?

You can ask, "Is everything okay?" Or say, "I sense there's something wrong. Do you want to talk?" Though she may deny anything's wrong, she'll remember you gave her the opportunity to talk. And when she's ready, she'll come back.

Once she opens up, it's important to avoid saying anything that would blame her for the problem, which is where many well-meaning pastors and lay-counselors go wrong.

Though she may deny anything's wrong, she'll remember you gave her the opportunity to talk.

Should we recommend she seek counseling?

When a woman first begins to disclose her abuse, she's often afraid and not yet ready to make any changes. She may feel overwhelmed or even guilty that she's told you about it. She's longing for a listening ear. So it's good to begin by offering to pray for her. You can say, "I can't imagine how difficult this is for you. I'm concerned for you. Here's my phone number if you ever need anything." Eventually you can let her know resources exist to help her. You can offer to help find a counselor and even call to make the appointment for her. This is helpful because an abused woman likely has lost the ability to think for herself or to find needed resources.

Be respectful, however, if she doesn't want to begin counseling right away. Showing respect for her decision is empowering to her because she's likely not able to say "no" anywhere else. It's important to show respect for her as an adult, even if she's choosing badly in the moment.

Is there anything we should avoid saying or doing?

Although friends and family mean well, they shouldn't give specific advice as to whether an abused woman should leave or stay with her husband. Complications exist with both options. Many times a physically abused woman is in more danger when she leaves. We often hear about men who stalk their wives and kill them for doing this.

Contrarily, friends or family shouldn't tell an abused woman to stay because that's what Jesus would want her to do. Sometimes we say things in ignorance without knowing the entire situation. And a layperson isn't equipped to assess these things.

Instead, offer to help her figure things out. Help her find and pay for a good attorney if she needs legal advice, give her information about a local shelter, and help her come up with a safety plan so she'll be prepared if she does decide to leave an abusive situation.

Realize, however, that the abused woman must ultimately make decisions for herself. A woman who's been under the influence of an abuser is used to being controlled. A well-meaning friend may come along and want to tell the woman what to do and even try to do it for her. But the abused woman needs to figure it out and do it herself. That's part of her growth through this.

How can we help prevent teenage girls and single women from entering into abusive relationships?

We need to start early. Statistics show that one in five female high school students is being physically and/or sexually abused by a dating partner. Additionally, 40 percent of girls 14 to 17 report knowing someone their age who has been hit or beaten by a boyfriend.

Young women are longing for family, community, and connectedness with others. And we've seen a cultural breakdown of these things. So when a girl finds herself being pursued by a guy, she experiences a rush of intoxicating feelings that are hard to resist, even at the risk of entering an unhealthy relationship.

To help young girls, as well as single adults, avoid abusive relationships, we need to reinforce the idea that it's okay to say "no." We've taught women to bend over backward to make everyone happy. And there's a high price for being too nice. So when a guy asks out a girl at the last minute, it's okay to say, "No, I've got other plans." Or when he calls late at night, she can say, "It's late and I'm tired. I need to go."

I began working on this with my now-grown daughter when she was eight years old. She was a pleaser. She wanted everyone to like her, and she didn't want to upset anyone. In many ways she was an ideal child to raise because I didn't get much grief. But I had to teach her how to stand up for herself. I'd take her shoe shopping, and she'd ask, "Which shoes do you like, Mommy?" I'd say, "You decide."

Singles and adolescents need to discern carefully how a man responds to their needs outside the relationship. Before you get your heart wrapped up in the person, try to see early on whether he has the capacity to respect your power to choose. If you choose something other than what he wants, can he handle it? If you learn he can't, it's best not to date that person.

What hope from Scripture can we share with an abused woman?

God deeply cares for the mistreated and oppressed. Psalm 34:18 says, "The Lord is close to the brokenhearted; he rescues those whose spirits are crushed" (NLT). The Bible teaches it's okay for an abused woman to seek help. Proverbs 27:12 tells us, "The prudent see danger and take refuge." And in 1 Samuel 20, we see how David fled from Saul in an effort to protect his own life. Christ came to bring those in darkness into the light (John 12:46). He wants to bring abusers to repentance and bring healing to abused women.