What the Capernaum steps to nowhere taught me about women in ministry.
Ginger Kolbaba 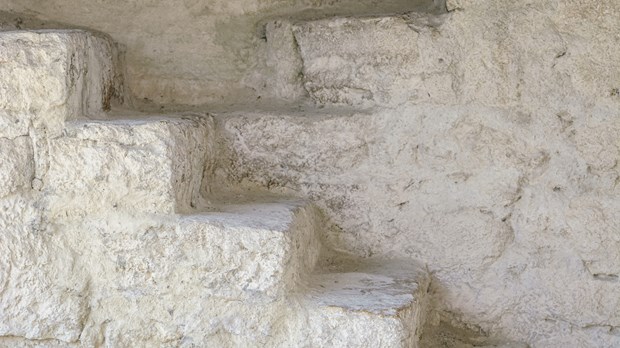 There I stood, at the ruins that had once been the synagogue in Capernaum during Jesus' day. Not much was left. A few half walls. The floor. By ruins standards, it was pretty impressive. But after a week in the Holy Land, visiting different biblical sites, I figured this synagogue, while interesting, was probably not going to be a highlight of the trip.

So my curiosity was piqued when I noticed five steps outside the synagogue running along the side of one wall, leading to nowhere. Others in my group glanced at the steps and quickly moved on, wanting to walk inside, to glimpse the real stuff. But the mystery of those stairs intrigued me.

Why would there be steps outside the wall? I wondered. Where did they lead? Was there a second floor to the synagogue? If so, why?

It made no sense. Finally I turned and caught sight of one of our leaders.

"Those steps would have gone to the second floor of the synagogue," he explained. "They were for the women."

I stared at him. Huh?

I simply took for granted that God could and did call women to lives of purpose and influence—not only in the home, but in the church, the workplace, the world.

"The women would have gone upstairs to worship," he continued. "They weren't allowed to worship with the men."

"So you're telling me women couldn't actually sit in the services with the men?"

"But wouldn't that have been difficult to hear what was going on?"

"How were they supposed to learn anything?"

"They weren't," he said matter-of-factly. Then he said, "That's one reason Christianity was so revolutionary and radical. Paul brought women down into the service right alongside the men. Women were no longer second-class citizens in the kingdom. They were equals."

I took a photo of those stairs.

In my home and church tradition, I was raised to believe that God calls both women and men to play significant leadership roles in his kingdom work. I took Paul's words seriously when he said in Galatians 3:28: "There is neither Jew nor Greek, slave nor free, male nor female, for you are all one in Christ Jesus."

I simply took for granted that God could and did call women to lives of purpose and influence—not only in the home, but in the church, the workplace, the world.

I discovered that if I wanted to volunteer in the nursery (not my spiritual gift!), then I should consider myself called to that ministry for the kingdom. Don't misunderstand me: these are good ministries—and great women fill them. But that isn't the way God gifted me.

The Lord and I wrestled over my continuing to attend that church. But every Sunday I returned because I felt God calling me to minister there. My heart broke when one Sunday our Sunday school teacher asked for us to pray for God to send the right man to fill the newly vacated worship leader position. I asked innocently why we didn't pray for God to send the right person—regardless of gender.

The leader smiled politely and uncomfortably.

"After all," I continued. "Don't we want to pray that God's will be done? What if God has a woman in mind to fill that role?"

"Because God doesn't call women to leadership positions. They're women."

And the men prayed and asked God to bring the right man to fill that vacancy.

As each week passed, I found my gifts getting dustier and rustier as they were pushed to the back of what I was permitted to do. Given that my gifts are not directed toward working with children, I felt that I had no place within the body of Christ to offer the tithe of my talents. I grew more and more frustrated and discouraged. My church seemed built to include only women who were gifted in specific ways, and I didn't fit.

God was calling me to be faithful to him where I was.

If I felt that way, I wondered how many other women had God-ordained gifts that they weren't using. And how many of those women were okay with not using them? With passing off the responsibility by saying, "It's not my job; that's for the men."

Why give me gifts and determination and calling if I'm not using them? I asked God over and over. How is it that I can use my gifts in the world, but not in the church?

But still I felt the Lord asking me to remain there, not to grow weary, to keep pressing on in pursuing the gifts he'd given me, understanding that my gifts were indeed growing the body of Christ—even if I couldn't see the fruits. God was calling me to be faithful to him where I was.

So I did what I usually do in moments of question and doubt; I grabbed my Bible. The more I looked, the more I saw woven throughout Scripture—sometimes blatantly, often subtly—the stories of women being called and used of God in mighty ways: as judges and prophets and military leaders and teachers and mothers. Miriam. Ruth. Deborah. Esther. Rahab. Hannah. The prophetess Huldah (2 Kings 22). Anna (Luke 2). Joanna. The many Marys. Phoebe. Priscilla. They said yes to God's purposes working in and through their lives.

And then there was Jesus. Jesus brought the status of women right to the forefront. Women were among his disciples. Mary of Bethany sat at his feet and listened to his teaching. In a day and culture when women were sent to the second floor, were uneducated and not allowed to participate in formal worship or learning, Mary sat at the Rabbi's feet to learn, and from learning, to follow in the footsteps of her Rabbi. It was radical. It was shocking. It was awesome.

The New Testament church became desegregated. Paul brought women into the sanctuary, which told them, "You all have gifts and a purpose to fulfill in God's kingdom. You all need to work together." What a revolution!

Standing at those steps, it finally hit me. I understood why Paul told women to keep quiet in the services. He wasn't saying, "Keep quiet. You're a woman." He was saying, in essence, "Yes, I know this is a big deal that you're sitting down here with the men. Yes, this is exciting and you have lots of questions about everything because you haven't been educated. And I know you're not used to sitting in the service. But instead of disrupting the services by asking questions or making comments, hold off until afterward. Ask your husband over lunch" (1 Corinthians 14:33-35).

"You all have gifts and a purpose to fulfill in God's kingdom. You all need to work together."

It was exciting for these women. All of a sudden they went from being slaves, chattel, being good for birthing babies and not much else, to being side-by-side with the men. For the first time, they were hearing the good news: not only had Jesus died for their sins, he had important work for them to do. He placed strengths within them that he wanted them to use. No longer did they have a "free pass" to get away with not doing kingdom work. They had a responsibility to step up to the plate and get 'er done.

He asks the same of us today.

If we're serious about living in the fullness of who we are in Christ, we must ask ourselves, What has God prepared me for? and Am I living that out every day?

Ultimately, it doesn't matter whether or not we attend a church that believes women can be—or can't be—ordained, or hold formal positions of leadership, or read Scripture in a church service. God is calling each of us to use the gifts he gave us where we are, right now.

Christ brought us down from the second floor and sat us at his feet. Let us not move back upstairs. Let us never sit back and use an excuse that God created us to be women and thus not as good or useful or called as men. Let us not pass over the responsibility by saying that the men are the real ones to lead and do the Lord's work, and as long as we take care of the nursery duty, we're offering significant aid. Yes, some women have been called to nursery duty—and God bless them for that. But God has called some men to nursery duty, and he has called some women to military duty.

God used that time in my life to grow me, to sculpt my character, to teach me about patience, and to remind me never to give up—even when my timetable and agenda are different from his.

I remained at that large urban church until another job change moved me to a different city. When I left with 20/20 hindsight, I realized that God had indeed used my gifts. I became one of the first women in the congregation to read Scripture from the platform. I headed up ministries within the singles group, and along with two other women, created a drama ministry. And I was glad I'd remained—even when I was beating my head against the wall—because God used that time in my life to grow me, to sculpt my character, to teach me about patience, and to remind me never to give up—even when my timetable and agenda are different from his.

I'm glad we're no longer on the second floor, trying to hear and worship a God who cares for men first and women second. Thank God that Jesus and Paul started a radical, wonderful, adventurous revolution. A revolution that we are part of. What a gift to us and the body of Christ.

Now is the time to continue the revolution that was started 2,000 years ago. Now is the time to say yes to God—regardless of where we are, what church we attend, or what talents we have. And watch how he changes the world through and because of the unique, wonderful gifts he gave us, women.