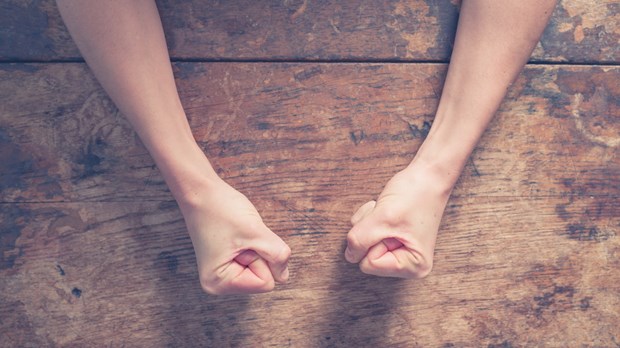 I muttered to myself, "If only Larry would be the man I expected, I wouldn't be so angry. It's his fault." We'd been married seven years and I feared our marriage wouldn't survive. I pleaded with God to change Larry—to make him work less and not be so interested in his flying hobby. Every time he flew without me, my anger increased. I repeated over and over, "It's all his fault!"

But then God began to change my perspective and as a result, he brought healing and joy into our marriage. If your spouse makes you "so angry," you might want to consider the insights God gave me.

I'm responsible for my anger

For most of my life, I'd blamed others for my anger. "If only they wouldn't do . . ." or "If only they would do . . ." But God began to show me verses like Ephesians 4:29, 31-32. "Do not let any unwholesome talk come out of your mouths . . . . Get rid of all bitterness, rage and anger, brawling and slander, along with every form of malice. Be kind and compassionate …" Paul used verbs that were commands, which meant I could choose to obey. It wasn't out of my control.

None of those verses say, "If your spouse treats you right, do not let any unwholesome talk . . ." or "If your spouse meets your needs, be kind and compassionate." There were no possible justifications. I was responsible for my reactions and if I claimed to be a Christian, I had the Holy Spirit's power to be patient as a fruit of the Spirit. As a result, I began to hold myself accountable.

Taking responsibility for my anger meant humbling myself and asking forgiveness from God and Larry. Though extremely difficult in the beginning, I was more motivated to recognize when I started to become angry in order to avoid needing to ask forgiveness. Learning to catch myself confirmed that I could choose to be angry—or not!

My spouse isn't a reflection of me

When Larry and I were with others, my mind rumbled, Why did he say that? or I can't believe he did that. Even though he was directing his actions toward others, I felt angry. If he was gruff with someone, I felt bad and would step in to make things better. If he seemed unconcerned about someone's situation, I went overboard asking them about it. It seemed like I spent a lot of thought and energy trying to make up for what I believed he lacked. And I felt angry because it seemed to put me in a bad light.

Then I began to question, Why am I feeling angry when he didn't even do those things to me? I was acting as though he was a direct reflection of me and I took it personally. When he didn't "perform" the way I thought he should and other people seemed unhappy, I felt like they judged me. After all I criticized other wives for not controlling their husbands. I thought getting angry at Larry would motivate him to change—thus would protect my image.

But James 1:19-20 says: "My dear brothers, take note of this: Everyone should be quick to listen, slow to speak and slow to become angry, for man's anger does not bring about the righteous life that God desires." My anger doesn't create righteousness in myself or anyone else, especially my husband. What a relief that I shouldn't try to be Larry's Holy Spirit! God wasn't holding me responsible for Larry's behavior and even if other people were, they were wrong. Larry is responsible for himself and not a reflection of me. I could be patient because I no longer had to change Larry to protect my image.

Anger is an ineffective diversionary tactic

Through biblical counseling, I learned that anger is often a means of taking the focus off myself. When we were making decisions about our new house, I suggested we put in cement on the side of the house to store the trash bins. Larry replied gruffly, "Why would you think that?" The message I "heard" was, Kathy, you're so stupid to think that.

Although I wasn't in touch with my inner humiliation, I actually felt like, Oh, no. Now everyone will know that I'm stupid and I've been trying to hide that for a long time. I reacted in anger hoping to point to Larry's lack of kindness so that my stupidity wouldn't be noticed.

Of course, I wasn't aware of my inner motives. Wasn't I just getting angry because Larry was insensitive? But as I observed my reactions, I saw that my anger came from a false belief. When Larry worked long hours, I felt like his "message" to me was: You're not important to me and I don't love you anymore. Through his seeming rejection, I felt like a big finger pointed out my own unworthiness and valuelessness. I reacted in anger so that I could point the finger back onto him and say, Look at my horrible husband who works so many hours. This isn't about my worth and value, it's about him being so unloving.

Over time, I became more patient because I believed the truth: my worth and value had nothing to do with him. I'm worthwhile, valuable, and loved because God loves me so much he sent Jesus to die on the cross for me. Whether or not Larry worked long hours or not had no bearing on that. Proverbs 15:1 helped to heal our marriage: "A gentle answer turns away wrath, but a harsh word stirs up anger." I could respond in gentleness, without finger pointing, because I believed the truth about myself. Then Larry was more responsive to my ideas as I explained them calmly.

Anger can stem from fear

When Larry chose his jobs and flying hobby over me, I panicked, Will we get a divorce? Is he really working or does he have a mistress? What will I do if I'm alone with two kids? Fear prompted my anger in order to force him to reassure me that those horrible things wouldn't occur or weren't true. When he didn't give me all the examples of love I longed for, I tried to get them by nagging and complaining, rarely acknowledging his loving actions.

It seems obvious to me now but at the time I didn't see that I wasn't trusting God. I thought God needed my help to change Larry. But I was saying through my anger, God, I'm afraid, and you're not protecting me, so I'll take matters into my own hands. I'll force him to meet my needs.

Facing my anger as distrust of God helped me revisit an old favorite Scripture, which took on a deeper meaning for my marriage. Proverbs 3:5-6 says, "Trust in the LORD with all your heart and lean not on your own understanding; in all your ways acknowledge him, and he will make your paths straight." That inspired me to think, Even if the worst possible thing happens and we get a divorce, God, I trust you to provide for me according to your will. I don't need to force what I think I need. You know best. You can meet my needs any way you like.

Since Larry was no longer responsible for my security, I didn't pressure him and I became more positive. When he changed jobs and took a cut in pay, he no longer had as much money to fly. He was home more. I realized that God had changed the circumstances without any help from me, and my trust in him grew.

Little by little, as I became less angry and God continued to work, our relationship improved. Amazingly, Larry wanted to spend more time with me since I wasn't the angry, demanding wife from whom he'd tried to escape.

Of course, there are no guarantees that if we change, so will our spouse. But even if he or she doesn't, we'll still be walking closer to the Lord and that's actually what making changes is all about.

As I look back at how God has used these insights, I'm amazed and so grateful. Insights like these are the principles Larry and I rely on in the Lord's strength to keep the joy and intimacy in our marriage even now that we've been married almost 40 years. Currently as Larry and I care for his 92-year-old mother who has Lewy-Bodies dementia, I can easily slip back into the old lies because of the frustrations that care-giving brings. But then the Lord reminds me of the truths I learned long ago: I'm still valuable, important, and loved even though we must be more centered on care-giving than on an abundance of attention on our marriage. When I react in anger or irritation, I know I'm believing the old lies. Surrendering to God's will and these truths bring me back to trusting God and enjoying my wonderful husband.

Kathy Collard Miller is a popular women's conference speaker and author of numerous books including Women of the Bible: Smart Guide to the Bible series (Thomas Nelson). www.KathyCollardMiller.com

Copyright © 2009 by the author or Christianity Today/MarriagePartnership.com Click here for reprint information.