I wanted to do great and grand things. I ended up hauling girls everywhere.
Nancy Kennedy 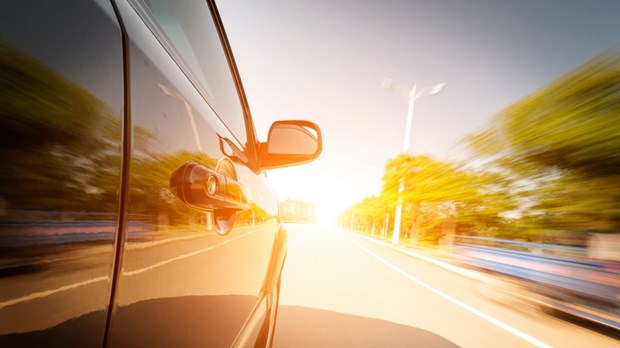 Years ago someone asked me what I wanted on my tombstone. I replied, rather flippantly, "She drove girls."

At the time I had a 1989 red Ford Tempo with 189,000 miles on it, of which I was sure 188,000 of those miles had been used to drive girls—to the mall and volleyball practice. To softball games and the mall. To the mall and church youth group. To the beach. To Taco Bell. To school. To the mall.

It was either drive them or risk them finding rides with someone's sister's boyfriend. As long as my daughters and their myriad of close, personal friends were in the backseat of my car with me at the wheel, I knew where they were. It's a control thing, but a common sense thing, too. Although I didn't realize it at the time, it was also a ministry thing.

Not too long ago, Kelly's mother called to thank me for what I'd done for her daughter. Kelly, who had died from leukemia at age 21, had been my daughter Laura's childhood best friend.

At first I thought she was thanking me for reading something I'd written for Kelly's funeral, but I realize now she'd meant something else, which brings me back to my purpose-driving life.

Years before, I'd prayed that God would give me a grand purpose in life. He answered by giving me two daughters and a set of car keys.

So drive I did—and became known among the other moms as Transportation Central. And I loved every minute of it.

It actually proved to be quite educational—I learned I could be invisible. The girls would all pile into my car and start talking about stuff girls talk about, which meant boys and other girls. As if I wasn't even in the car—hence the invisibility factor—they would start dishing the dirt.

You can learn a lot by being invisible, and as I listened to their conversations, you can bet I prayed as I drove!

During my years of driving girls, my car was used as a cafeteria, a beauty parlor, a dressing room, a last-minute study hall, a laundry hamper, and a place to take a nap.

It was also at times a confessional and a sanctuary. Something amazing happened when my little red Tempo filled with girls.

Sometimes I wonder if those girls in the backseat realized his presence. I think maybe they did, because every once in a while (when they would acknowledge my presence) they would ask me questions about my Christian faith or my opinion of Ouija boards or levitating. We discussed Buddhism, paganism, and Marilyn Manson. Sometimes I was able to pray out loud for them.

It was all so very natural, yet not. It was mundane and ordinary, yet incredibly holy. Now that my daughters are grown, I actually miss those days.

At one time I'd wanted to be somebody important, to do great and grand things. I ended up driving girls. It wasn't what I'd envisioned, but for a good portion of my life it was what I'd been created and called to do.

Jesus told his followers that God cares about sparrows. He commended the poor widow who gave two meager pennies, talked about faith the size of a mustard seed and the growth potential of a kernel of wheat. He chose a puny shepherd boy to be king of Israel.

As I talked to Kelly's mom, I remembered that Kelly was one of the girls I not only drove places, but listened to, prayed for, and loved. God used me to share Christ with her—and she died loving Jesus. I realized that for all those years behind the wheel of my car I had no greater purpose.

I had asked God to give me a grand purpose, and he did.

While driving girls all over central Florida wasn't lofty, it was heavenly. And although it wasn't what I would have chosen, it turned out to be what I will always cherish.

Nancy Kennedy is a former TCW regular contributor and writer for the Walk With Me blog.

Copyright © 2009 by the author or Christianity Today/Today's Christian Woman magazine.