When bullets started going off in my community, I discovered I had more power than I realized to do something about it.
Renee James 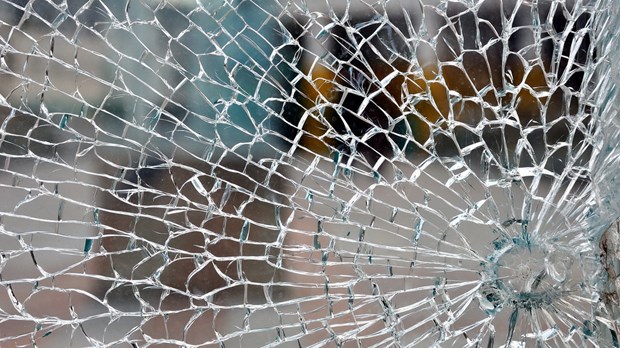 It took two minutes to sink in. The pops my son Christopher and I had just heard weren't the backfirings of a balcony BBQ from the grimy apartments we always passed on our way to the park. They were bullets being fired.

Someone in or near those apartments was shooting, not very well mind you, at four strapping youths who were running across Winona Avenue and up Vaughan Road past Vaughan Road Academy, ignoring traffic lights, uncaring of the cops around the corner who happened to be standing in front of the apartments. They didn't see me, Christopher, or the other pedestrians about to cross Vaughan Road as the traffic lights changed.

One youth went down; he'd been hit. I heard his expletives and saw the concern in his comrades, who all turned and ran back, helping him to his feet and taking off again. The cops around the corner clued in. Two drew their guns, big and iron gray, as they caught up with the youths.

"Get down with your hands behind your heads! Now!" one police officer said. The youths were cornered and forced down. And all the time, bullets were still being fired from the building.

I quickly plopped Christopher into his stroller.

"We're not going to the park today," I said breathlessly. As I turned around to head home, I looked down. A bullet case glinted up at me. Gotcha! it seemed to wink.

My knuckles went white as I pushed Christopher's stroller away from the intersection.

"Christopher could've been shot. I could be dead!" I sucked the words in, hoping my son hadn't heard. I walked blindly past the turnoff to our street, desperate for my ears to stop ringing, for my legs to feel like they belonged to me again, for my heart to slow down. The metallic whir of blades overhead snapped my numb focus: police helicopters were out now.

The Earth Is the Lord's

Three weeks later, a 17-year-old died on Winona Avenue, 500 steps from my doorway. And this time, he hadn't had a chance. Three of the five bullets had hit home.

When the TV news broke the report, every word punctured the shellacked complacency I'd never known I'd worn so well—or so proudly: teachers and lawyers, artists and contractors, quiet Portuguese families and stay-at-home moms lived on my street. We all expected bullets and blood in north Toronto's Jane-Finch corridor or Regent Park's deadly streets in the city's east end—rough neighborhoods where "they" lived. Bullets and blood happened to them, not to us.

Not this time. My tears and prayers for the mother of that slain teenager didn't come easily and couldn't soothe. My prayer, "Thank you, God, that nothing happened to Christopher," provided hollow relief. Perhaps it was the proximity of the shootings. Perhaps it was as simple as being a mother for the first time. But after that second shooting, I prayed as I'd never prayed before: "Lord, what do you want me to do?"

That verse took root in my spirit as I prayed. Its words resonated. The kids on Winona Avenue who sauntered out at 6 p.m. most weekday evenings, wearing their gang colors of red and black, needed to know that they belonged to the Lord. I needed to know the truth of those words too.

Within a month after that second shooting, Jeff (my husband), Christopher, and I began prayer-walking through the neighborhood—starting on Winona Avenue. Nervously drawing back the dead bolt on our front door, we stepped out into morning sunshine (the police had advised us not to walk in the early evening or night hours). We stepped out into the truth that every prayer-walk we made would bear profound witness to the fact that the ground on which that youth's blood had spilled belonged to Jesus Christ.

Since then, we've walked and prayed, watched and listened numerous times. Our prayers vary in volume and intensity and our pace is never the same from one prayer-walk to the next. The space between my shoulder blades sometimes tingles when we venture down a smaller side street in the neighborhood, away from the "safe" noise of buses and cars on the main streets like Vaughan. And I admit, while we pray for houses and their inhabitants, our walking and praying are more about acknowledging whose ground it is we're walking on and whose people we are.

I told our closest neighbors that we prayer-walked. It was, and remains, a tough sell. To a fault, they all pause then chase the bewildered looks off their faces with comments like: "Oh, that's a positive thing to do; prayer is good. Anything positive helps." They nod a lot.

"Keep doing it," schoolteacher Catherine told me one day, neatly cutting off my half-spoken invitation to her to join me. "We need you to do this."

Our prayer-walks are carrying us farther and deeper into our neighborhood. In fact, because of those walks Jeff and I have chosen to volunteer with change-seeking local community and arts associations. These volunteers care. They are visible. And they hold nothing back: not time, energy, words, or money. Frankly, this level of involvement scares me more than our prayer-walks. But the Word who became "flesh and blood and moved into the neighborhood" (John 1, The Message) reminds me that belonging isn't for the faint of heart.

As we've prayer-walked we've seen God work. The drug- and gang-related turf wars have subsided in the aftermath of a sweeping Toronto-wide police crackdown on drug dealers.

And I continue to prayer-walk.

The earth is the Lord's—down to the stones that carried the faint bloodstains of that teenager through one fall and winter. If I believe that, and I do, more and more each day, I'm able to walk out—shock's powdery residue still swirling in my belly—ready to bear witness to the fact that Jesus Christ, through his Spirit, walks with me.

Renee James is the director of communications for Canadian Baptist Women of Ontario and Quebec and is editor of its magazine, The Link & Visitor. She prayer-runs now.

As I became more serious about my prayer-walks I studied some great resources to help me prepare and use my time and prayers more wisely. Here are some tips from Prayerwalking: Praying On Site With Insight by Steve Hawthorne and Graham Kendrick and PrayWalk: Becoming a Woman of Prayer, Strength, and Discipline by Janet Holm McHenry.

1. Research. It's critical to do some research on your neighborhood prior to prayer walking (how old, first residents, past events, current trends). Doing this homework is the first step to praying with insight as you walk. It will allow you to pray with relevance.

2. Prep pray. Spend time in silent, directed prayer for your neighborhood in which you live or in which your group or church meets. Some suggested questions to direct this time of prayer:

3. Keep in mind. When you do prayer-walk: