Why our Sabbath might be missing some serious fun.
Carolyn Arends 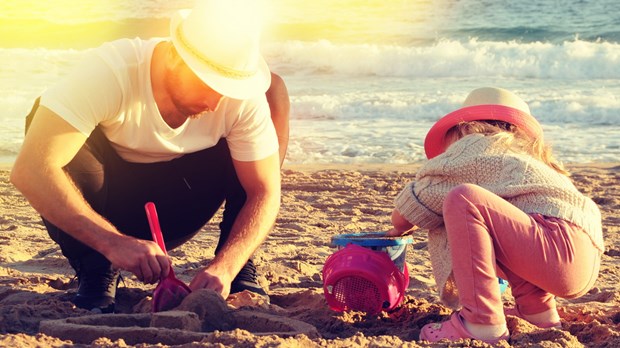 When you want to show my one-year-old nephew, Henry, a good time, all you have to do is say, "Boo!" If you get the cadence right, building up to the "boo" repeatedly in a rhythmic flow, Henry will collapse in spasms of unbridled laughter. This can go on indefinitely, until you both have to take a break in order to wipe your eyes and give your laughing muscles a reprieve.

Henry doesn't need to observe the Sabbath; he already lives there. He works hard—building vocabulary, developing mobility, eating crayons, laughing at aunts—and rests whenever the need for a nap seizes him. He doesn't yet reside in what the Greeks called chronos (chronological) time; he doesn't know a minute from an hour, or a calendar from a picture book. To Henry, the ticking of a clock is just another element of rhythm in the music of his life.

I believe Henry is still operating in kairos—the elastic, eternal present of God's time. The "boo" game goes on so endlessly because Henry has all the time in the universe. We grown-ups aren't so lucky.

Sabbath is, among other things, an invitation to periodically step out of the relentless stream of chronos in the hope of catching a whiff of kairos. It's a deliberate setting aside of to-do lists, an intentional surrender of the persistent delusion that the cosmos needs us to mind the store. It's a willingness to see time as a gift that need not be managed or maximized, but simply enjoyed. In fact, one of the telltale ways we know we've entered into kairos is the fact that when we do, we lose track of time altogether.

If I conducted a survey on what sorts of practices help people lose their consciousness of both time and self, I'd wager that a good percentage of them constitute some form of play. For many of us, our Sabbath is lacking some serious fun. If we desire to celebrate God's sovereignty and provision, if we want to live as if we truly believe that all things live and move and have their being in Christ (rather than in our management skills), we may have to consider the spiritual practices of snowboarding, Scrabble, or sandcastle building. We may need, as Jesus so famously suggested, to become like children again.

In Orthodoxy, G. K. Chesterton talks about the Henry-like capacity most children have for repetition in play. "They always say, 'Do it again'; and the grown-up person does it again until he is nearly dead." Then Chesterton asks, "Is it possible that God says every morning, 'Do it again' to the sun; and every evening, 'Do it again' to the moon? It may not be automatic necessity that makes all daisies alike; it may be that God makes every daisy separately, but has never got tired of making them. It may be that He has the eternal appetite of infancy; for we have sinned and grown old, and our Father is younger than we."

Could it be that Jesus told us to be childlike not only to encounter our heavenly Father, but also, in some sense, to emulate him? One way to find out is to discover what sort of play plunges you most completely into kairos and then do it (again and again) as one of your spiritual acts of worship. Sabbath time is undoubtedly well used in meditation and contemplation. But recreation might just be a missing piece of the puzzle in the re-creation of you.