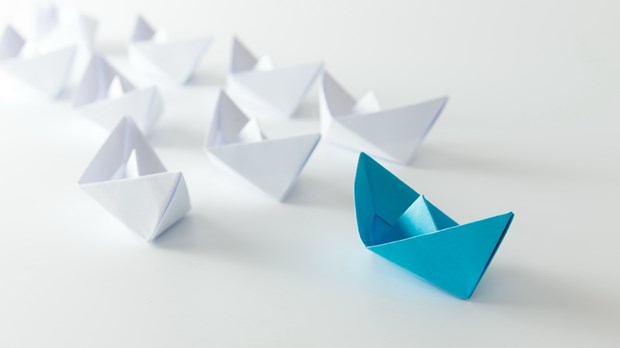 I used to think Alcoholics Anonymous was all stale prayers and smoky church basements. I considered myself a distant admirer of the program, but even as a counselor, I didn't want to get too close. AA was a good idea for some people, but surely it wasn't relevant to my busy life of "making a difference" in women's ministry.

Last summer my stereotypes were shattered through a course called "Substance Abuse and Society," which gave me a firsthand glimpse into the program of Alcoholics Anonymous. Like the church, AA encourages people to seek healing and growth. But sometimes unlike church, AA prizes authenticity—in a Jesus kind of way. I was surprised at how much I gleaned about leadership in those church basements. Take a journey through a few of the Twelve Steps to examine your authenticity as a leader:

During a thunderous summer storm, a slim and attractive woman in her forties stepped behind the podium at an AA meeting. Her chunky pearl bracelet slid up her arm as she pulled the microphone toward her.

"Hi, I'm Christy, and I'm an alcoholic." During the next 30 minutes, Christy shared her journey to a sober life.

Her appraisal of herself, both in addiction and recovery, was gut-level honest. Yet she possessed strength that gave her an almost regal air. A huge thunderclap punctuated her closing words, "Surrendering saved my life."

Christy reminded me of the woman Jesus spoke to at the well in Samaria. When Jesus confronted the woman with an honest appraisal of herself, she ran back to tell anyone who would listen that "he told me everything I ever did!" (John 4:39). The story goes on to say that many believed in Jesus as Savior because of her testimony. Christy and the woman at the well both recognized their need for a Savior after an honest appraisal of themselves. Honesty didn't cripple them with self-condemnation. It transformed them into powerful witnesses of grace.

I consider myself a leader because of my ability to build consensus and solve problems. But serving God is about more than what I'm good at. It's about what he's doing in me to transform me into a witness of his grace and love. As a leader, do you strive to present yourself authentically? Do you resist the urge to "have it all together" for other leaders, church members, or friends? Are you willing to examine your own failings so that God might testify to his grace? Shedding the put-together image shifts the glory-spotlight back to where it belongs: on God's power, not our own.

Join the conversation
Read as Single Page
Page 1 of 4

Nicole Unice is a TCW regular contributor. Nicole is on the ministry staff of Hope Church and author of Brave Enough and She's Got Issues. She writes for a variety of magazines and speaks nationwide at retreats and leadership events. Nicole and her husband Dave have three children. You can find her blogging about honest living at NicoleUnice.com.