A reminder to pray for all who are in authority so that we might live peaceably.
Anne Graham Lotz 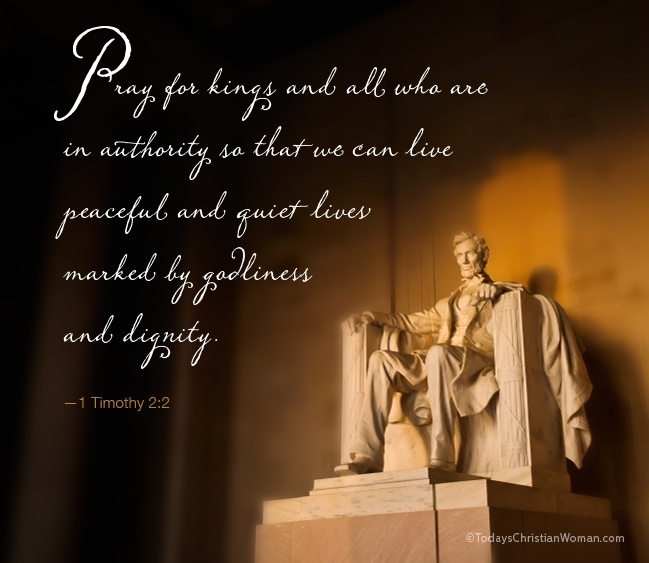 AtPope John Paul II's funeral last spring, I looked out on a vast sea of people jammed into St. Peter's Square. Across the broad platform on which I was seated were over 100 world leaders—many of whom represented nations that are hostile to one another. To their right, I could see the colorful garb of men and women representing various world religions—Buddhists, Hindus, and others not as recognizable—religions that at times seek to persecute and stifle the faith represented by some seated on the same platform. Surrounding me were leaders of almost every major Christian group, from Baptist preachers to Coptic priests—groups that often compete with, criticize, and, at times, condemn one another. To my left were row upon row of Catholic bishops, dressed in their raspberry-colored robes and caps.

The focus of everyone was centered immediately in front of me on a crucifix and the simple wooden casket that held the body of Pope John Paul II.

The most impressive aspect of this surreal scene was the peaceful atmosphere of reverence. How could so many people be so still? How could so many warring factions and sects come together in harmony? As I pondered this, I silently prayed, asking the Lord to give me insight.

With millions of people crowding the city of Rome to mourn the death of a beloved Pope, and an estimated 1 billion people watching his funeral on live television around the world, surely God had a message he wanted to convey. What was it? And then I knew.

Just as the death of one man, Pope John Paul II, brought together people from virtually every nation and religion in momentary peace, so the death of one Man, the Lord Jesus Christ, can bring the world together in permanent peace—peace with each other, and peace with God. The answer to personal conflicts and problems, to world wars and hostilities, to ethnic prejudice and hatred, is Jesus!

Surrounded by members of almost every nation and religion, I bowed my head and thanked God for the opportunity to share his Word—and for just giving us Jesus.

Adapted from TCW article "Jesus Is Still the Answer" by Anne Graham Lotz.