My perspective as a convert to Catholicism
Christy Scannell 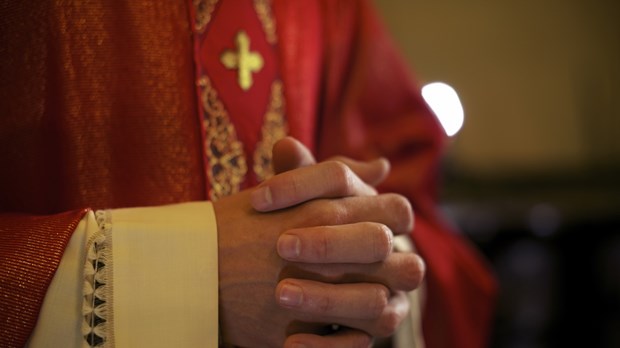 When I called my mom to tell her I was joining the Catholic church, she hung up on me.

I wasn't really surprised. After all, for generations my family had been part of an evangelical denomination. Why on earth would I want to go to a church where they "worship" Mary, say rote prayers, and (gasp!) drink wine?

Not long after that incident, I was on staff at a Christian writers' conference where I was seated next to an evangelical pastor for dinner. He raised his eyebrows to my admittedly timid response when he asked, "So what church do you go to?"

"I like how the Catholics fight abortion, but that whole praying to dead people thing is unbiblical and wrong," he said in a pompous, accusatory tone that drew the attention of the table of ten. He then went on to lecture me for 20 minutes about why Catholicism is heresy while I tried to tuck in to my Salisbury steak.

Needless to say, I skipped dessert.

When I returned home, I described this encounter to my parish priest. He nodded sympathetically.

"Yes, that's why I no longer attend the interfaith prayer breakfasts," he said about a monthly local gathering of pastors. "It's one thing for people to ask questions, but it felt like I was being nailed to the wall every time and not allowed to respond. And by my own brothers in ministry!"

His response mixed with my own recent experiences bounced around like marbles in my head. On the one hand, I still had an enormous amount of affection and respect for my evangelical friends. But after years of searching, I felt I had found a spiritual home in the Catholic church. Why weren't both groups able to see their many areas of common ground and agree to disagree on the differences?

What I discovered through conversations with both evangelicals and Catholics was a simple lack of information. Many evangelicals dismiss Catholicism based on flimsy or misinformed knowledge of Catholic beliefs. Meanwhile, many Catholics take a "my way or the highway" approach that creates a barrier interested evangelicals find difficult to penetrate. When the two come together with open hearts and minds, however, they can walk away with a new appreciation for each other.

Let's try that exercise together, for a moment. I'll outline a few areas where Catholics and evangelicals agree, and then I'll introduce some key areas of difference. Your job is to keep that open heart and mind as you read.

The Trinity. Would it surprise you to know that Catholics do believe in the Trinity—sans Mary? Indeed, the Catholic church teaches that God the Father is the head, Jesus is the second Person, and that the Holy Spirit, the third person of the Trinity, dwells within all believers in Christ—just as Protestants believe. That said, Catholics do look to Mary as a role model more often than many evangelicals do—after all, she was chosen of God as a key player in the Incarnation. And we do ask her to pray for us, most commonly through the Rosary, a series of scriptural prayers. However, Mary is not part of the Trinity, nor does Catholic theology place her as equal to or above God or Jesus. In fact, the pastor at my church (which is predominantly Hispanic) frequently reminds parishioners that Mary is not to be worshiped or prayed "to"—a fallacy that seems to have intense hold over some Hispanic communities.

Jesus' life and mission. Another major area of agreement between Catholics and evangelicals is our beliefs about Jesus' life and purpose. Together we affirm the Virgin Birth and Jesus' sinless life, atoning death, bodily resurrection, and ascension. We all believe Christ will come again to judge humankind, and that we rely on God's grace for salvation.

The importance of Scripture. Perhaps less known to evangelicals is the Catholic view of Scripture. Yes, Catholics include some extra books in our Bible—often called the Apocrypha—because we believe the Reformers dropped these books from the original Bible. But that difference aside, both evangelicals and Catholics hold a high view of Scripture and inerrancy. We agree on the Bible's divine inspiration. I personally believe evangelicals hold the corner on effective ways to teach and study Scripture in small groups. However, it's important for evangelicals to realize that Scripture is a central aspect of Catholic worship. Every Catholic mass includes a significant amount of Scripture—typically one Old Testament, one New Testament, and one Gospel reading per service—and priests are instructed to preach on that day's Scripture reading, not a topic of their choosing. Also, most of the prayers and liturgy we recite are drawn from and based on Scripture. Overall I would say evangelicals and Catholics are equally matched in Bible teaching—we just go about it in different ways.

Ethics and morality. A positive comment I often hear from evangelicals about Catholics—and an area where we share interest—is our commitment to morality. Catholics have what we call a "womb to tomb" outlook on life that fights abortion, supports families, cares for the sick and homeless, and challenges capital punishment. If you've ever seen an abortion clinic protest, for example, you probably witnessed passionate Catholics praying for the mothers and babies. Worldwide, Catholics are leaders in outreach and missions work. Our commitment to these matters springs from and is centered on our faith in Christ—just like the admirable work evangelicals do in these areas.

Tradition. Now, let's look at a few areas of difference. I mentioned the Apocrypha already. Including that in the Catholic version of the Bible comes from the church's belief that both Scripture and tradition should be studied when deciding matters of faith. Protestants, however, maintain sola scriptura: the belief that the Bible (rather than tradition or human teachings) is the primary way of understanding God and his truth. Though evangelicals value church history, they do not regard the teachings of church leaders throughout the centuries ("tradition") in the same way Catholics do. Catholics clearly agree that the Bible is God's inspired word, but we also contend that God has given us church leaders and traditions to show us the Christian way. We can see this same value expressed in the New Testament, as the apostles frequently refer to tradition or example (see Acts 15:1-14; 17:28; 1 Corinthians 11:2; Philippians 4:9) when instructing new Christians. In 2 Thessalonians 2:15, for example, Paul said to "stand firm and keep a strong grip on the teaching we passed on to you." For Catholics, that means revering teaching from the church fathers, such as Augustine of Hippo, to complement—but not supersede—what is in Scripture.

Works and salvation. Perhaps the stickiest point of contention between Catholics and evangelicals lies in our understanding of salvation. Both groups insist that the doctrine of original sin and the need for grace are key to salvation. But unlike evangelicals who interpret salvation to be a gift of faith (focusing on passages like Ephesians 2:8), Catholics look to Paul's teaching in Philippians 2:13 ("For God is working in you, giving you the desire and the power to do what pleases him.") as a directive to pursue good works. This relationship between true faith and a life of obedience is emphasized strongly in the Book of James. However, contrary to a common misunderstanding among Protestants, the Catholic church does not teach that salvation is "earned" through good works (despite some misguided Catholics who think they can gain admittance to heaven through attending daily mass or saying a certain number of prayers). Rather, we see the Christian life as a journey from baptism forward that includes obedience and good works to keep us from serious sin and in a state of grace (James 2:26). So while Catholics believe simple faith alone (without a life of obedience) is not sufficient for justification, we also don't believe works are the sole answer—it's a combination of the two.

The Eucharist (Communion). Transubstantiation is a big word that means that the bread and wine at Communion literally become Christ's body and blood. When I was an evangelical, this was one of the most difficult concepts for me to grasp as I explored and studied Catholicism. Frankly, I thought it was a bit hokey until I started reading explanations from the Bible and church fathers. The most powerful is in John 6:25-71 when Jesus told those gathered that they had to eat his flesh and drink his blood to have eternal life. When the disciples questioned him, Jesus confirmed that he had meant what he said. Some of his followers were so turned off by the idea of eating Jesus' flesh and drinking his blood that they abandoned him. Catholics believe that if Jesus had actually meant for the elements to be merely symbolic, Jesus would have gone after the deserters and reassured them.

Let's be clear: I don't expect to convert anyone via this article (my mom, by the way, now will attend mass with me—but she remains firmly evangelical). Instead, my intention is to help create some bridges of understanding for evangelicals about Catholics—bridges that go two ways. Having participated in both fellowships, I can attest we both can gain much from each other. Catholics could use evangelicals' help in building community (small groups, for example) and approachability (such as making the mass more accessible to newcomers). Similarly, evangelicals might look to their Catholic brothers and sisters for how to appreciate the Christian church's history and how to incorporate meaningful traditions in worship.

If Christians want to follow the Great Commission (Matthew 28:16-20) and win people for Christ, we need to band together. Does that mean we ignore our differences and pretend they aren't there? No. But rather than fixating on our differences and making enemies of each other, through accurate mutual understanding we can build on our shared convictions and can together be powerful messengers of the gospel.

Christy Scannell is a freelance writer and editor living in California. She is the co-author of the three-book series, Secrets from Lulu's Café. christyscannell.com.