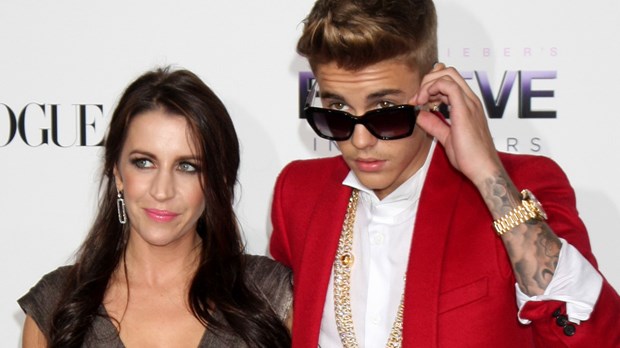 Pattie Mallette, mom to pop sensation Justin Bieber, says it was when she was hospitalized as a teen after attempting suicide that she first encountered God's presence.

I've found great personal fulfillment through healing—more than through having a pop star for a son or having money, success, or fame.

Raised by a single mom, Pattie began to experience sexual abuse as a three year old. The abuse continued for years, along with Pattie developing an addiction to drugs and alcohol and engaging in a series of unhealthy relationships. At 17, she threw herself in front of a truck, which narrowly missed hitting her. Pattie's mom then took her daughter for treatment.

Pattie outlines her story and the restoration she's experienced in her book, Nowhere But Up. She is also executive producer of Crescendo, a short film dedicated to raising money in support of pregnancy centers around the world. Pattie, 37, is now using her platform to talk about the hope and healing found in Christ. Here, Pattie shares with TCW about growing in her faith and experiencing healing along the way.

What happened when you were hospitalized for attempting suicide?

A Christian man from a youth center where I used to hang out visited me in the hospital and en-couraged me to turn to God. He kept saying, "What do you have to lose? If God is real, see what he has planned for your life."

At first I doubted if God really could forgive me. I felt filthy and so far gone. At one point, I closed my eyes and saw all of my sin before me. I asked God for forgiveness. Then his presence came over me from head to toe. I was cleansed. I wept with tears of relief, gratitude, and hope. From that moment on, I wanted to know more.

How did your life change after that experience?

I was so excited and started attending church. Yet just six months after I gave my life to the Lord, I became pregnant with Justin. I was full of shame. In retrospect, it's not hard to see how it happened. I was broken and had not yet experienced healing from the years of abuse and addiction. I thought, How am I supposed to go back to church as an unwed mom? But the people at church welcomed me with open arms. They began to encourage me in my faith.

In what ways did you make faith an intentional part of your parenting?

I dedicated Justin to the Lord as a baby, as Hannah did with Samuel in 1 Samuel 1. I wasn't in a relationship with Justin's dad, and I remember praying, "God, I need you to be the father he doesn't have. Please surround my son with godly men." Through the years I prayed repeatedly for God's protection over Justin and for him to really fear and know the Lord. I taught him Scripture. My faith became such a big part of who I was that I think it just naturally came through in my parenting.

How did you deal with the pain and brokenness of your past?

For many years I struggled with anxiety and depression because of the traumatic things that hap-pened to me as a child. I sought counseling. I'm a big advocate for it. I also began spending regular time with God. I think there's power in the words of Psalm 46:10, "Be still, and know that I am God!" So I'd just make myself be still. I went to God in my brokenness, and he really met me there. He says in Scripture that he's close to the brokenhearted, and I discovered the truth of that firsthand. For me, it was a combination of counseling, prayer, and becoming vulnerable with God through confessing my need for him.

What did you learn about yourself in the process?

As I went through the journals I kept as a teenager, I was surprised at how much I hated myself. Even as an adult, I found myself feeling ashamed and embarrassed at the kind of person I was during those years. My sister encouraged me to forgive and extend grace to myself. She reminded me that those who are hardest to love often need love the most. Part of revisiting my past included coming to grips with who I was, and shedding the shame I carried because of it.

Why speak out about the abuse and addiction you faced?

I've found great personal fulfillment through healing—more than through having a pop star for a son or having money, success, or fame. So I've shared my story with the hope that I can help others who have been through abuse or trauma to realize that they can experience healing too. Until you work through the pain, you remain stuck. I want people to feel strengthened and hopeful.