For Melissa d'Arabian, food has always been more than just food. It has been a constant anchor through the many unexpected turns her life has taken—after losing her single mother to suicide at 20, she found a way to use her childhood love of cooking as a means to help fund her MBA. She cultivated the art of cooking during her years in Paris as a single woman working in Disney's finance division and began helping other women cook more cost-efficiently after becoming a full-time mom to her four daughters. Melissa became a national face for cooking on her own Food Network show (Ten Dollar Dinners) after winning the fifth season of The Next Food Network Star in 2009. Food has also been a way for Melissa to connect with other women, whether it's through the pages of a cookbook, a TV screen, or around a table with a shared meal. She spoke with TCW about the role of food in her life and in our culture, how God has worked in and through her as he's raised her platform to a national level, and what she wishes women could understand better about food and cooking.

I wonder if you could start out by telling me a little bit about your journey with food. How did you get started in cooking?

My mom was a single mom, and she was putting herself through college and then eventually medical school. When I was five, she invited a bunch of my girlfriends from kindergarten and their moms to our house to have cookies and hot cocoa and to sing Christmas carols. And that little event was just so much fun that, even though we were on a tight budget, we started doing it every year. It grew from cookies and cocoa to a full-fledged party, which we called the Mother-Daughter Holiday Tea. My mom, my sister, and I would bake for weeks ahead of time and freeze cookies and cakes. That was the beginning of my love for connecting with women, which has become a huge thrust in my career and my life, and also for my love of cooking, especially cooking for people. And that's what food is about: It's about connecting people, nourishing people, and it's about showing love. It's about making people feel welcomed and making people feel adored.

That's really special. So how did that lead you into food as a career?

My mom and I would take cooking classes—pizza, Italian—so we always had an interest in it as I grew up. But I went to business school, and after I got my degree, I worked in strategy and finance for a number of years. When I met my husband and we had four daughters in two-and-a-half years, I became a stay-at-home mom, and I started doing speaking events about guerrilla money-saving techniques. Some of them were about how to lower your real estate bill or the best strategy for saving money on your diapers, and some had to do with food: how to buy it in the store, and how to leverage your food at home so you get the biggest bang for your buck. That led to me being on Food Network and talking more and more about that.

I also lived in Paris for four years as a single career woman. Paris is where I took the leap from cookbooks and using other people's recipes to understanding food and flavors, and letting the market drive what I made. Paris has a very ingredient-driven culinary society, and getting into those little markets—the fish markets, meat markets, fruit and vegetable markets—and finding inspiration in ingredients, that transition happened while I was in Paris. Whether you're a grad student wanting to entertain on a tight budget, or you are a single working girl like I was, or you're a mom who needs to get the food on the table for all your screaming kids—all of those experiences are ones that I relate to.

I love to cook and I work very hard on my recipes, but the recipes are just a means to an end. The bigger story for me is about connecting with people, and in my case, particularly women. I was raised by a single woman, I'm very close to my sister, and when my mom died while I was in college, I moved in with my sorority sisters, who supported me. I didn't get married until I was in my 30s, so for more than a decade, my holidays were with my girlfriends, who were indeed my family. And then to find out that I'm blessed with raising four young women—it was really a perfect plan if you ask me, and I can't believe that I get that honor. I love women, I love hearing about women's successes, I love sharing each other's burdens, and I think that we're meant to connect with one another. Indeed, the Bible says that as a church we're not only supposed to worship with one another but to share each other's burdens and share each other's joys. That's the bigger story for me.

You're also working on a degree at Princeton Theological Seminary. Tell me a little bit about that program and why you decided to do that now. 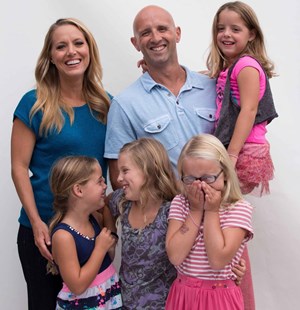 Melissa with her husband and four daughters

Just to clarify, it isn't a degree; it's a certificate program in Ministry and Theology. I'm doing more faith-based speaking and connecting with women in the faith world, and while I'm a group leader in my Bible study, and I love reading and studying the Bible, I felt that if I'm going to be in this leadership role, I needed more context. I needed to deepen my knowledge and to couple my passion with more knowledge. I felt particularly called to connect more with the Old Testament, which is my weakness—I feel a lot of Christians are weaker in the Old Testament. There's a saying that "someone's branches grow wider than the roots are deep." That's a great description of how I was feeling. It's great that God gave me wide branches through this platform, but my branches got wider pretty quickly because I was on TV. So in order to match that, to stabilize the tree so it wouldn't topple, I felt I really needed to focus on my roots.

Over the past 50 years, we've seen the food culture grow so much, and it's become such a part of people's lives in a way it wasn't before. Why do you think this is happening?

We're really seeing the link between food and the way it nourishes us. We're in the most educated world that we've ever had, and so it's not surprising we're learning and that we know more. And when we know more we want to do better. We're seeing the impact: 40 years ago, we started to intervene in the natural food cycle, and now there's a movement to go back to the natural order of things. We have more of a respect for the natural cycle, being good stewards of our resources and celebrating seasonality. I love that movement.

The '80s and '90s were such a period of "more is more," and then two things happened: one was the economic crisis, the other was 9/11, and I think those really changed us. Suddenly it's in vogue to talk about the need to sit down at the dinner table with your kids and to talk about the importance of that time spent around the dinner table. Now we have people like Michael Pollan, who is a fantastic visionary in terms of our food supply and our food habits.

His latest book comes down to one thing, and it's surprising: the most important decision that we make about food, our bodies, and our health is not whether or not we buy organic; it's whether or not we cook our own food. It's that simple. We're celebrating the dinner table and connecting.

Do you see any danger of this food culture going too far, and taking people away from the role food should have in our lives?

Yes, I do. We're human. There's always a danger for us to take a good thing and make it bad. For as much as people are watching more cooking TV, and we're reading more cookbooks, those things don't necessarily translate into people cooking more. Worse, what if, because people are watching more TV and they have more cookbooks, they're under the impression that they are cooking more? They might think that they're such a foodie because they watch a lot of TV and have a lot more cookbooks, but a foodie who watches a lot of TV, has a lot of cookbooks, and eats every meal out is hardly following the model of celebrating farm-to-table and cooking their own food.

What do you wish women understood better about food and cooking?

The first thing I would say to women is that we don't have to do it perfectly. We think if we can't do it perfectly, then it's not worth doing at all and we give up. But the Bible gives us the freedom to fail and to not be perfect, and we see that over and over again. We see that in Mark, where the disciples keep failing over and over again. And failure, as we see later on in Paul's letters, draws us further into God. Our failures are evidence of our great need for redemption.

We think if we can't do it perfectly, then it's not worth doing at all and we give up.

The second thing: if you are going to eat fast food every single night, or three nights a week, start with the habit of connecting with your family. Bring it home and set up plates, and have it as a family meal. It's counterintuitive to what a lot of people think: "Anything worth doing is worth doing well." I disagree. If I do it but don't do it well, and don't stress out that I'm not doing it perfectly, it's amazing how God meets me halfway, and there's a traction that develops. In Exodus when the Israelites have come out of Egypt and they're complaining—"Why couldn't we be having lamb stew in Egypt?"—God rains down manna every morning. He says, "Take what you need and I'll provide for you. But only take what you need. Then on Fridays, I'm going to give you twice as much so that Saturdays you can take a rest." He presents this covenant, and Sabbath is part of it. Am I in that spirit or am I not?

I actually think that while the food is important, the fact that we sit around the table and make it ourselves is more important. It's really about connecting with our families and nourishing them and feeling good about taking God's bounty and eating it.

Laura Leonard is the managing editor of Building Church Leaders and is a regular contributor to Christianity Today's Her.meneutics. She is an enthusiast of many things, most particularly music, and loves reading and writing about ways to think more deeply and Christianly about the world in which we live. Follow her on Twitter @lmarieleonard. 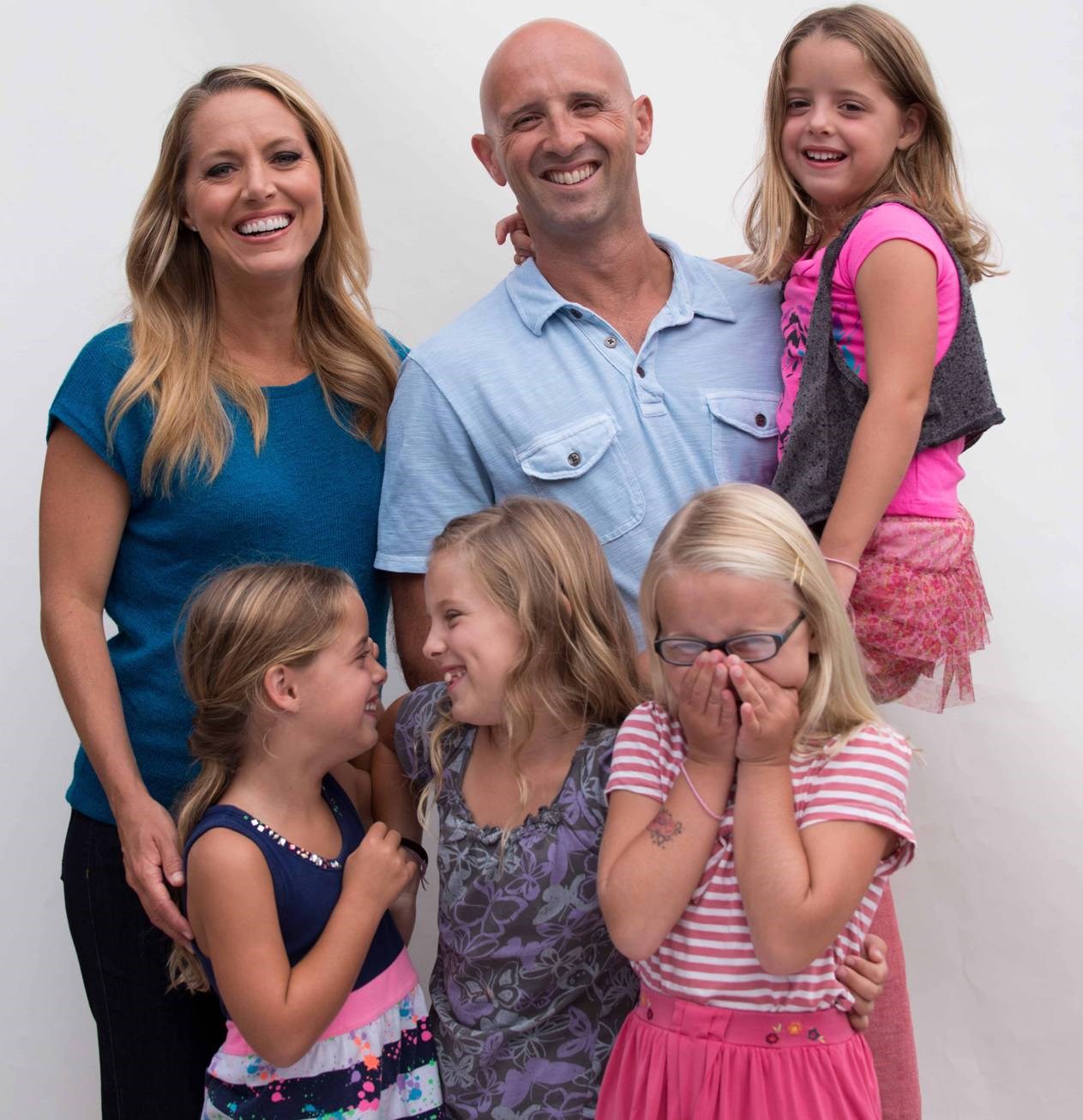