What are Millennials doing after college?
By Hannah Roop 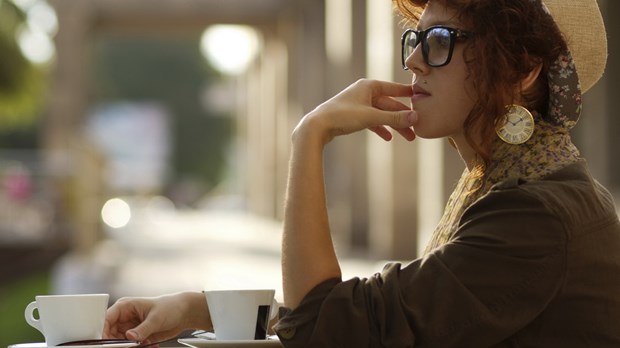 My generation—the Millennial generation—has been given many labels. We are tech-savvy, self-centered, educated, entitled . . . the list goes on. But perhaps most associated with my peers and me is not a word, but an image—a lanky, unsmiling, young adult wearing thick-rimmed glasses and holding a mason jar of organic loose leaf tea: the hipster. The generation before us was characterized by go-getting and career-motivated yuppies. But my generation is characterized by the hipster who, along with buying organic food, wearing thrift shop clothes, and listening to indie music, is defined by not having a real career path at all. Some would say that my generation is carelessly killing the American dream. But I believe that at the root of the hipster persona, beneath the organic and the vintage, is a desire to live in a way that makes the world better—a desire to change things for good.

Some would say that my generation is carelessly killing the American dream.

Birth of a Hipster

If we use this definition, I was a hipster before I knew what the word meant (before it was cool, if you will). As a senior in high school, I volunteered at an all–fair trade store, had two pairs of TOMS shoes, and prided myself on being our family’s recycling police. (On my careful watch, many envelopes and empty yogurt cups were rescued from a bleak landfill fate.) I rejected a conventional career for dreams of going to a far corner of the world and making a difference. I knew in my head that God uses businesspeople, teachers, writers, and other professional men and women for his kingdom, but in my heart I believed that those who loved God most would take the big risks, go the distance, and do something huge—like eradicate human trafficking. When I packed up to go to a Christian private college, I carried all of my dreams with me, confident that—no matter what was printed on my diploma— I would graduate to make a difference.

At the beginning of my freshman year, I moved into my dorm, went to the club fair, and got to know my fellow TOMS-wearing students. I signed up for a refugee-child tutoring ministry, went to lectures on sex trafficking and fair trade, and took an introductory class in anthropology, the subject for world savers like me.

However, making a difference was a lot harder than I thought. It turned out that about half of my freshman class had the future goal to “save the world,” and many of them had a plan for how they’d do it. Without adequate plans, experience, or passion, I felt like a save-the-world wannabe. Adding to my discouragement, I had a difficult time connecting with the shy Indonesian student I tutored, and she rarely asked for (nor needed) my help. After a lecture on a world issue, I would walk back to my dorm saddened and empty handed, given no solutions, nothing that I could do to help.

Among many things, I learned in my anthropology class that good intentions are not enough. Inconsiderate of cultural concerns, power dynamics, and sustainability, altruists and humanitarians often just make things worse (take for example, my beloved TOMS shoes). Everything I thought I did to make a difference in Jesus’ name seemed to be ineffective at best, destructive at worst.

Everything I thought I did to make a difference in Jesus’ name seemed to be ineffective at best, destructive at worst.

After a disillusioning first year of college, I had a completely different perspective of what I would do with my life. I felt as though the lights had come on, the curtain had come up, and now it was time to give up on making a difference and start figuring life out. In place of my “save the world” dreams I thought about the coming reality of getting a job and earning money. I considered pursuing more vocation-focused studies, like education or pre-law. I had little work experience, so I applied for summer internships and wrote scattered articles for the campus newspaper in order to have something on my résumé.

In the fall of my junior year, I spent a semester abroad in Costa Rica and brought my questions and frustrations along with me. As my classmates and I learned about Latin America’s history with its scores of injustices, I felt my old “save the world” passions bubbling up again. I can’t let this happen, I thought. I can’t let my fanciful idealism take over—I’ve got to hold on to the “real world.”

Soon our group met Elmer, a man who’d grown up in a garbage dump in El Salvador. As a young child, he watched commercials on a thrown-away TV and wondered why hunger had chosen him, while milkshakes and French fries had chosen those happy children on the screen. Elmer’s prized artifact of the dump was a postcard of a snowy North American landscape. He would stare at it, imagining the icy coolness and letting fade the consciousness of his sweating forehead and pained stomach. At Christmas, wealthy people would come and bring gifts, take pictures, then go back to where they’d come from. For Elmer, the things I had seen in documentaries and heard about in lectures were his life—for him, the issues I’d tried to ignore are the real world. As his story lashed my heart and turned my stomach, I could no longer hold back my desire to see change, but my bitter, worldly, practical mantras—that will never work, nothing will change, will you really make this sacrifice?—suffocated every budding conviction.

A few weeks later, my classmates and I followed Roderick, a Costa Rican organic farmer, through his land as he talked to us about his work. We carefully avoided trenches and took notes on paper cast green by sun-illuminated leaves while Roderick told us that leaves are the lungs of the earth, and the soil the stomach. As he talked about fertilizer preparations and the magic of minerals, I understood that Roderick was working closely with God. As he explained the way his farming practices add biomass to the soil instead of taking it away, he didn’t cite statistics or slogans. He said that for him the land is an altar to God. Through giving back good soil, he gives thanks for God’s provision.

From building a clinic for women in the Middle East, to being a social worker for troubled children in Chicago, we all hope to pursue something greater than a steady income, or even a job we love.

As we weaved among coffee bushes and passed under guava trees, questions of the practical prickled on the borders of my mind. How does he support his family? This is all he’s done for 20 years? How does his tiny, 30-acre farm make a difference in the world?

My questions were calmed by a holy truth when Roderick admitted the many setbacks and the uncertainties, but he stretched his arm out toward a sure land: I know my reward is on the other side.

Seeing Roderick’s life makes me think that Jesus would have been a hipster. While I don’t think he would be into the mustache, I do think that he guides us away from the traditional and comfortable toward a vision of the truly original, good, beautiful kingdom.

I see the dreamers of my generation—the thrift store shoppers, amateur craftsmen, and slow food movement joiners—pursuing the “raw” and “original.” In this pursuit, they reject the traditional career path that their parents have followed, trying to figure out what the good life is really made of. The Christians of my generation are doing the same thing.

Each of my closest friends and I dream of using our education to help others. From building a clinic for women in the Middle East, to being a social worker for troubled children in Chicago, we all hope to pursue something greater than a steady income, or even a job we love. We want to make a difference.

But unlike hipsters, the Christians of my generation don’t seek a different way of life just to make a statement or to prove our parents wrong.

It would be easy to brush these dreams off as impractical or as mere offshoots of the fleeting hipster trend. And just like leg warmers and hair perms, organic food and DIY everything may pass away as my generation ages. But unlike hipsters, the Christians of my generation don’t seek a different way of life just to make a statement or to prove our parents wrong. We aren’t striving toward a kingdom in which we set trends. By God’s grace and as his servants, we are building a kingdom that will last forever—one kind word, one rescued child, one cubic foot of healthy soil at a time.

The hipsters of my generation may reject a well-laid career path in pursuit of some ethereal definition of the original, real, or beautiful. But it could be that the “Jesus hipsters” of my generation lay down their parents’ dreams for the greater dream of an eternal kingdom—a kingdom that will thrive long after mason jars and organic wool socks have faded from memory.

Hannah Roop is a senior English Writing major and editor in chief of the campus literary journal at Wheaton College. When not reading for class, she enjoys trying new recipes, taking yoga classes, and watching vegetables decompose in her very first backyard compost pile.