Advent and a nation in turmoil
Kelli B. Trujillo 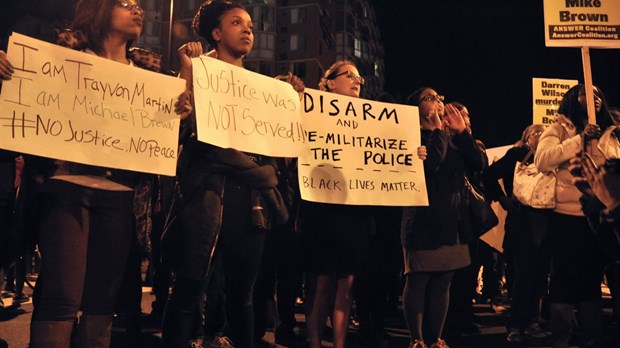 In what should be a season of joy and carols and lights, these are the chants echoing in Ferguson, in New York City, across the social media landscape, and in cities and homes around the country. As I’ve poured mugs of hot chocolate and passed out candy canes to my giddy kids, I’ve been struck by the irony: the festive joy of the holiday season set, in sharp relief, against the backdrop of a nation in turmoil.

Through Amos, Jeremiah, Isaiah, and others, God spoke piercingly against entrenched systems of oppression, unjust courts, and a lack of concern for the poor and marginalized.

And yet, as we’ve lit candles as a family to mark Advent, I’m also moved by how deeply this season resonates with this painful and difficult cultural conversation. How long, O Lord? Christians have asked for centuries during Advent. In this season Christians around the globe align our hearts with the scriptural, messianic longing for the and focus our hope on the coming of his just, eternal kingdom. I’ve been praying this traditional Advent prayer, which seems especially fitting: “O Radiant Dawn, splendor of eternal light, sun of justice: come, shine on those who dwell in darkness and the shadow of death.” For amid all the lights, the shopping, and the merriment are questions of death, calls for justice, and a sense that we’re indeed dwelling in a dark time.

“But I am not racist!” I told my friend Tressie in a choked-up voice. “I feel like I’m being blamed for things I did not do!” She and I sat together in the college union after an emotionally-charged Martin Luther King Jr. Day event in which a black student leader’s angry speech left me, as a white student, feeling defensive and frustrated. But now, some 15 years later, I’m still deeply grateful that Tressie, my black sister in Christ, took the time to patiently challenge me during our hours-long conversation. Tressie helped me see how much I needed to truly listen to the point of view of others, even if those perspectives were shaped by experiences quite different than my own. She helped me begin to understand that this ongoing discussion isn’t just a conversation about whether individuals are racist or not, but rather is a much broader, ongoing dialogue that must be couched in an understanding of history and current realities.

As Ed Stetzer asserted in his CT response to the Ferguson decision, we need the same reminder today. “I wasn’t in the grand jury room, and I don’t know the evidence,” Stetzer wrote, “but many godly African American leaders are hurting and they are explaining why. I think we should listen to them.”

While we value the selfless work of police officers who, daily, serve and protect our communities, we must be willing to look these big-picture realities in the face and not turn away.

This kind of listening can be uncomfortable and painful; it may mean being willing to hear and receive raw and vitriolic feelings of anger and hurt, “of fury and despair.” Yet rather than plugging our ears to grievances that make us feel defensive or uncomfortable, as people of faith, we can choose to enter into dialogue and to hear and value the honest feelings and life experiences of others who are different from us. This Advent I’m compelled to listen.

While there may be a variety of opinions and responses regarding the individual Brown and Garner cases, it’s critical for us to listen to the clear, consistent, and pointed message of the Old Testament prophets making clear over and over again, that God is concerned with systemic injustice. Through Amos, Jeremiah, Isaiah, and others, God spoke piercingly against entrenched systems of oppression, unjust courts, and a lack of concern for the poor and marginalized. We hear it in Jeremiah’s soul-weary lament: “To crush underfoot all the prisoners of the earth, to deny a man justice in the presence of the Most High, to subvert a man in his lawsuit, the Lord does not approve” (Lamentations 3:34–36, ESV). Rather than shows of religiosity, God urged his people to “let justice roll down like waters, and righteousness like an ever-flowing stream” (Amos 5:24, ESV). He called them to “loose the chains of injustice...and not to turn away from your own flesh and blood” (Isaiah 58:6–7, NIV).

While the situation in America today is quite different than the periods of history in which Isaiah and others prophesied, we yet must take seriously God’s deep concern for justice. Underlying today’s protest movement are serious racial disparities in our own justice system, such as concerns about the use of excessive force and big-picture trends in arrest rates, incarceration rates, and execution rates. While we value the selfless work of police officers who, daily, serve and protect our communities, we must be willing to look these big-picture realities in the face and not turn away. As people of faith it is incumbent upon us to squarely acknowledge these realities, to care, and—when led by God—to prayerfully take action against such injustice.

Our Hope in Dark Times

As NFL player Benjamin Watson poignantly expressed in his viral Facebook post about the Ferguson decision, these are quite complex matters—but, ultimately, Jesus is our hope. As we each face the painful, racial turmoil embroiling our nation, Advent invites us into the age-old longing for the Messiah who will one day beat swords into ploughshares () and who will “bring forth justice to the nations” (, ESV).

I’m left without words when I see the chokehold that ended Eric Garner’s life and hear his plea to breathe. I was struck speechless this morning when my young daughter, utterly confused, said to me, “Wait, this is happening in America?” Over and over, I’m struck dumb by the weight of the pain I hear expressed by many of my brothers and sisters in Christ; I’m left wordless in sorrow and solidarity.

And so, with inadequate words of my own, I turn to these ancient words to express my lament, my longing, and my hope this Advent season:

In one the hearts of all mankind;

Bid Thou our sad divisions cease,

And be Thyself our King of Peace.