In the world’s “most dangerous place for women,” the greatest fear isn’t rape or death—it’s being forgotten. My heartbreaking experience in a displacement camp for the people of Congo.
Belinda Bauman 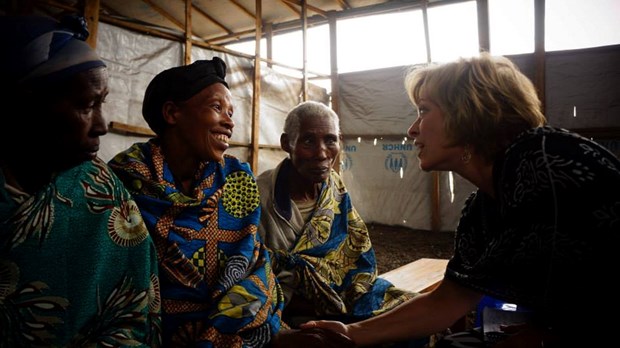 She was haggard and beautiful, pulling her sweater closer to her body as the rain clouds above us threatened. Her name was Uwimana Marie, she was 50 years old, and she timidly spoke as I asked about her flight to the camp.

"When you're a refugee, you lose everything," she said while inspecting her perpetually moving hands. "But the most painful part of becoming a refugee is losing your right to think. I used to think about my farm, my goats, and the education of my children. Now, I only think about how to survive each day."

Four other voices murmured their affirmation. At this, the floodgates opened, and each found confidence to pour out their own story of loss and lament.

The Nkamira Transit Camp—a camp set up by the United Nations for Congo's "Internally Displaced People"—is located just across the Rwandan border. To say the camp is "filled to capacity" would be an understatement. Last month, a kind but overworked camp director arranged for me to meet with Uwimana Marie and four other women who sought refuge in the camp. These women, all between the ages 40 and 80, represent a demographic that makes up almost 60 percent of the camp population. As the camp director and I walked past the tarp walls and tin roofs of 11 warehouse-sized living blocks, I saw women and children in every nook and cranny. The women were cooking, washing, carrying bundles of charcoal, and waiting in endless lines, while children were kicking balls made of banana leaves and trash. They were all ultimately trying to get on with their lives in this new place. Every pair of eyes I looked into seemed to plead, "Do you see me? I'm here, I'm here!"

As a "transit camp," refugees are meant to only stay a maximum of three days. Uwimana Marie and her four companions had been here for well over nine months. They fled from their home in the Democratic Republic of Congo (DRC). Dubiously referred to as "the most dangerous place to be a woman," "the worst place to be a mother," "rape capital of the world," and "the world's greatest humanitarian disaster," the conflict in the Congo is regarded by the international community as intractable and hopeless. Every day, these five women lived in the midst of the "headline" statistics of this war: 6 million dead, 2.7 million internally displaced, almost 450,000 refugees, and a woman or child raped every 60 seconds.

Dubiously referred to as "the most dangerous place to be a woman," "the worst place to be a mother," "rape capital of the world," and "the world's greatest humanitarian disaster," the conflict in the Congo is regarded by the international community as intractable and hopeless.

As my afternoon with these five women went on, Uwimana Marie spoke again, detailing her flight to the IDP camp.

"My village was attacked at night. We stayed hiding on the farm as long as we could. When the gunfire stops, you check and hope, check and hope. But the gunfire always starts again. Then you know your family must flee alone—without your goats, or your friends or sometimes all of your family."

Her eyes were wet as she remembered her husband and oldest son staying behind to guard the farm. She has not heard from them since that night.

Fleeing is outrageously hard on these women. Traveling only at night and praying the dark will hide them from those who seek to take their lives and the lives of those they loved, fleeing meant dodging gunfire through the night while comforting their screaming children. For many other women, fleeing means getting hunted down, beaten and raped—some say that 9 out of 10 fleeing women between the ages of 3 and 72 have experienced gender-based violence. Of the internal wars in the DRC, it is commonly said that "rape is cheaper than bullets."

In light of all this, did these women believe God was with them? What gave them hope? What did they fear? Each of these questions led us to moments of healing and hope.

God's presence in the midst of everyday terror

As each woman bravely unfolded her story of suffering to me, I asked if God was still there. As if by some agreed-upon signal they all sat up straight, squared their shoulders, and boldly said, "Yego!," which means yes. Nyira, the oldest of the group at 76 and married for "more years than she could remember," spoke with the confidence of her age.

"God is certainly here, and listening to us as we talk right now!" she declared. "We have each reached a place of safety, and are still alive. We have shelter and hope that our families may yet come to us. God is here because we have hope."

Two of these women believed that God had actually blinded the eyes of soldiers and militia men that chased them, allowing them to safely cross the Rwandan border. One of them was able to find her lost child who slipped away from her in the chaos and dark of fleeing. All of the women were surrounded by real bullets, and none of them had a single physical injury. The credit, they insisted, goes to a God who is there for those who suffer.

God was also real in yet another way: in forgiveness. For each of these women, forgiving those who hurt them, who violated their dignity, or who murdered their family was a sign that God was indeed real and present in this war-ravaged place. Each one gave testimony to the power found in forgiveness—God himself.

For each of these women, forgiving those who hurt them, who violated their dignity, or who murdered their family was a sign that God was indeed real and present in this war-ravaged place.

"If we forgive those who hunted or hurt us, it is not from us but from God himself," whispered Kamanzi Rosa. "If we were to continue to keep the bitter burden in our hearts it would destroy us. We must forgive them. We must not wish to kill them as they wished to kill us. Our lives were threatened, but we are still alive and so we must forgive."

To say the future of these strong women is precarious does not begin to sum up the situation. Each day they fight against two dark and sinister enemies—hopelessness and fear. When I asked the women what they feared the most, the question hung in the air for a quiet moment. Then slowly came their honest response:

"We fear being forgotten. There is no hope when you have been forgotten."

I was undone. Stinging tears came to my eyes at the answer that hit a bit too close to home. I also fear being forgotten. But for them, it was true—the world had forgotten them. We've ignored the death, the uprooted, the rape and destruction that is currently encompassing this part of the world.

But had God forgotten them? No, not in their narrative; he was still their hope and strength. Even though they too had tears in their eyes, these women believed that God had come to their aid. They were not forgotten. They pointed to, of all things, my presence and all who would read my words, as witness and proof that God had not forgotten them.

To see and be seen

"When our eyes see those that see us, it gives us hope," Nyria smiled through her dry lips. "Hope is to know that others know us. This is how we know God has not left us."

"If we have no peace it is because we have forgotten that we belong to each other," she said. Slowly, we each came into focus in the other's eyes. I saw the strength of women who endured the deepest of suffering, and yet hoped in God. They saw a woman who willingly listened to their story and would try to give voice to their pain. In the slow rising of the sun, the fog of war dissolves, and in the light of dawn we see clearly we are not alone. God had given us each other.

Our lives bundled together

Returning home, my best friend and husband, Stephan, constantly urged me to remember my sisters in Congo.

"Carry friendships beyond the visit, the task, and the project. Continue to honor them as they honored you," he said.

The virtue and calling of friendship lay in shouldering burdens and joys together, face to face and eye to eye, even if it's across an ocean and through a war zone. As the Congolese say so eloquently in this complex, conflicted region, "Sticks in a bundle are unbreakable." I have bound myself in friendship to these brave women, for to befriend is at its root and essence different than to become a benefactor. I pray for my friends and they pray for me, and we are not alone—this I know to be true. I have seen it with my own eyes.

I hope that you will join me in remembering this story and praying for Congo.

Belinda Bauman is an advocate and teacher, speaker and writer, wife and mother. She is currently helping direct the work of Ten For Congo, a grassroots movement of individuals who want to raise awareness and funds for the people suffering from an ongoing, brutal civil war in the Democratic Republic of Congo (DRC). She is currently writing a series of articles on the themes of grassroots peace-building, and the suffering of women caught in conflict. Through her life's work, she seeks to bring justice into the dark corners of the world. Belinda is married to Stephan Bauman, President and CEO of World Relief, an international relief and development organization thatbelieves God has equipped the church—the most diverse social network on the planet—to be at the center of these stories. Together they do life in Baltimore, Maryland, with two sons. 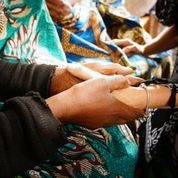