And other myths we believe
Margot Starbuck 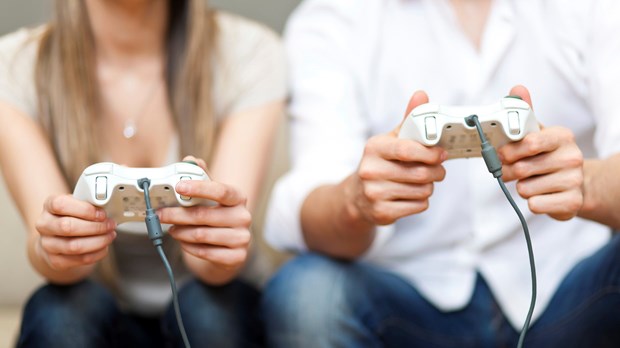 If we had a Wii gaming system, we'd all be happy.

My daughter thought that using the Wii to create Mii avatar graphics that looked like her favorite science teacher would make her happy.

My boys believed that if they could at last play the flashy Lego Star Wars game on a new Wii they'd be happy.

Because I'd seen my kids hopping around to dancing games on a friend's Wii—#exerciseforcouchpotatoes—I thought that if we had a Wii gaming system that also improved their cardiovascular fitness I would be happy.

And we all agreed that if we purchased enough extra controllers, friends in the neighborhood could be happy along with us.

There was no question about it: the Wii was going to make us one creative, happy, physically fit, and social family.

There was no question about it: the Wii was going to make us one creative, happy, physically fit, and social family.

Two years earlier, we'd been super-happy when we inherited a GameCube from generous cousins. (Yes . . . because they upgraded. To be happier.) I knew the games they'd sent along with it were a few years old, but my young kids had never had a gaming system before so it was new to them. And for a week or two, they were really happy.

But when the Wii was released, we realized the cold hard truth: the GameCube didn't let players dance competitively to ABBA's Dancing Queen.

This is how I justified coercing grandparents to pool their designated Christmas gift money to purchase a Wii for our family.

Because I made the final purchase of the Wii with the promised funds—since, in our experience, grandparents can't be trusted to not purchase the wrong product—I probably shouldn't have been as surprised and enraged as I was when, a few months later, my youngest was begging for an Xbox.

So he could be happy.

If you can believe it, the Wii did not satisfy. Any of us.

Quicker than I would have preferred, my kids learned to play Wii dance games sitting in a bean bag chair moving only their wrists. Lego Star Wars was fun for about three days. Maybe two. Same with a weird army of middle school science teacher avatars. And the neighborhood friends? They were in their living rooms playing their own Wiis with better controllers.

Because I didn't know a mustached Mario Brother from rat-tailed Anakin Skywalker, I became that mom who indignantly claimed that I'd known it was a bad idea all along.

The truth, though, was that I was no different than my kids.

Though I wouldn't be tempted for a moment by the newest version of Mario Kart, I recognized in my kids the same impulse that was inside me.

Ooh, I love that tiny little phone that can slip into my breast pocket of my favorite denim jacket.

There's a slightly bigger phone that can text? Want it.

A medium-size smartie phone that can get e-mail? Gotta have it.

Wait, there's one so big I can draft my next book on it? Here's my credit card. And I'll also be needing the attachable full-size keyboard.

It didn't end at electronics, either.

Every Tuesday morning at 9:53, on my way to therapy, I'd drive past T.J. Maxx wondering what might be inside. After all, their television commercials had trained me to know that they were getting in new stuff every single week. So as I'd zip past, I'd dream that if I popped in 60 minutes later as I looped back toward home, something might be in there that would satisfy the deepest desires of my heart. Possibly ones I'd not even known I had. And whatever was in there might even be lime green with white polka dots. And come in my size.

Apparently that rotten little withered fruit I despised in my children—the promise that the next thing would finally satisfy—hadn't fallen far from the tree.

One just never knew. The promise, evident on the faces of the slender well-dressed women in the commercials was clear: if I shopped at T.J. Maxx I would be happy. Apparently that rotten little withered fruit I despised in my children—the promise that the next thing would finally satisfy—hadn't fallen far from the tree.

So if the fault didn't lie with my children, if I might somehow be complicit, I'd need to blame the television advertisers (the ones that featured happy families hopping around to Dancing Queen and happy women wearing polka-dot lime green pumps).

And if the advertisers could be to blame for the addiction my children and I seemed to share, I needed to imagine a day sans advertising when it had not been like this.

So I convinced myself that when my mom was a girl, the Sears catalog would arrive in the mailbox and she and her sister, adrenaline-free, would patiently choose one dress, in some timeless fashion, to put on their Christmas list. That's how it went in my mind.

Then I Googled Sears catalog.

Richard Sears sent out his first printed mailer in 1888 to advertise watches and jewelry. By 1894 the catalog that had blown up to include men's and children's clothing, baby gear, sporting goods, horse saddles, sewing machines and more, was branded, by Sears, "The Cheapest Supply House on Earth."

Two years later Sears added a spring and a fall catalog, beginning the mad race toward the 52-season fashion year.

Yes, as unlikely as it now seems, Sears—satisfier of all desires and creator of more—was the T.J. Maxx, Amazon, and Walmart of its day, neatly rolled into one.

So I learned that this business of stimulating desire for stuff we didn't know we wanted, wasn't born in 1979 when the Saturday morning cartoons I watched promised a cool plastic prize in boxes of Honeycomb cereal. Nor would it end with the fabulous New Balance running shoes that finally helped my chronically-injured feet and were maddeningly discontinued about three hours after being produced. Rather, this is how we are.

Parenting when this is how we are

So what's a parent to do when "I Can't Believe That Rotten Kid Wants an Xbox!" gives way to "Oh, No! I'm No Different from That Rotten Kid!"? If neither the "modern" advertisers nor my typical (not-rotten) children are entirely to blame, I clearly share in the culpability. Here are a few ways I've tried to bridle my desires, and help my kids at the same time:

Say No to Myself

While I'd wanted to assign the ridiculous craving for "the next cool thing" to my children, I, of course, recognized it in my own heart. Before I could deliver a "no" that had integrity to my kids, I'd need to test drive it myself. One year it looked like swearing off buying new clothes altogether. Recently it looked like finding an older used laptop on eBay. I've found that I'm more fair to my kids when I'm not projecting my own guilt about over-consumption onto them.

Say No to My Kids

My youngest son eventually saved enough money for an Xbox. Now they're wooing him to buy a monthly subscription to access more cool new stuff every week (#justlikemom). Since some things still don't happen without credit cards, his dad and I—who wield the plastic—said no. While he was disappointed, we believe that, in this case and many others, "no" best serves him.

If I expect my kids to be satisfied with a toy that's two years old—gasp!—then I need to do the same. That means I aim to practice satisfaction. So my kids won't see me scrambling after the hottest new fashion. And I encourage satisfaction in them. This month we climbed up into the attic and pulled down a garbage bag full of old Legos. Without setting foot in the Lego store, we had a ball finding pieces they'd remembered and hunted for over the years.

Resisting the lure of "If I had [fill in the blank] I'd be happy" is a journey my kids and I are taking together.

Margot Starbuck wouldn't be wearing the hottest fashions anyway. But she does try to keep it real at home in Durham, North Carolina. Connect with her on Facebook, Twitter, or at MargotStarbuck.com.