Seeking contentment in the face of infertility
Mary Bellus 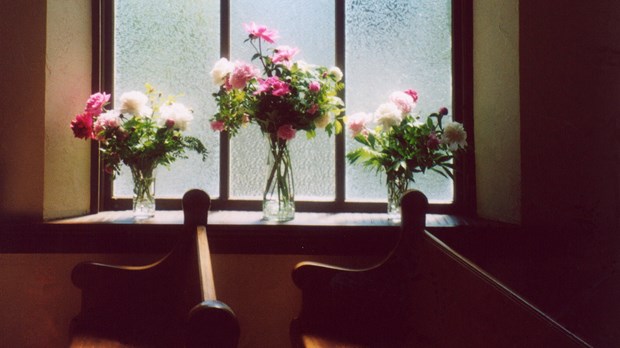 It's been awhile since I've been in church on Mother's Day. In fact, I don't even know what kind of service our church has for the holiday. Even before my husband, Dan, and I ever had struggles with infertility, I had always been disenchanted—even downright embarrassed—at the way the church has generally handled Mother's Day.

I remember back to my early church days. On Mother's Day, the whole church sanctuary would be decked out in colorful flower arrangements. The aroma of the breakfast that the fathers had cooked for the moms earlier that morning would waft up from the basement kitchen. As we entered the church, ushers would pass out carnations to the mothers. My mom would take her red carnation and carefully pin it to her shirt, slightly embarrassed by the attention. These were beautiful gestures that conveyed honor and respect for all mothers.

Unfortunately, it didn't end there. During the service there would be special prizes given out to the newest mom and (gasp!) the oldest mom. For the mom with the most children, the room would suddenly turn into a sort of auction, complete with a bidding war, "Who has four? Do we have four? Do we have five? There's five! How about more than six? Ooh! Eight!" and the room would break out into applause.

How horrible this must have been for them to be singled out in order to receive their honorary mom consolation prizes.

As I got older, the church seemed to get the idea that "Hey, not all women are moms," and so they'd give non-moms white carnations or there would be a call from the pulpit to "stand up if you're a daughter, sister, or aunt—you're our honorary moms!" Looking back, I can still see the awkward, painful looks on these women's faces. How horrible this must have been for them to be singled out in order to receive their honorary mom consolation prizes. I can imagine them thinking, I'm not an "honorary mom." I'm a woman with talents, life experiences, desires, and—even more so after this experience—pains.

With these memories and images still clear in my mind, combined with my own personal struggle with infertility, I can't even imagine stepping into a church on Mother's Day. Maybe things have changed. Maybe they don't single people out anymore or give prizes based on how many children women have successfully birthed, but I'm not going to go and find out. I'll go visit my mom and celebrate her amazing generosity, hard work, and leadership. I will give her the obligatory flowers (mostly because she loves them and won't even wait for us to leave before she's transplanted them into her garden). I'll make her lunch and make sure her favorite dessert is represented. I will do all of this willingly and with complete joy—but you won't see me at church.

My husband, Dan, and I have been married about 13 years. At the very beginning, we weren't on the same page about having kids. He wanted "a couple or so" while I wanted zero. One day, pretty early on in our marriage, we were in the produce section of the local grocery store, and he was trying to convince me to change my mind. "C'mon," he playfully pleaded, "don't you want just one kid?"

We had been holding hands, and he sort of tugged on mine. "Just one?"

The guy just wouldn't give up. "C'monnnnn, just one?"

I looked at him and said, "Fine. We can have just one kid."

He quickly added, "Well, if you can have one, you can definitely have two." He tricked me, the sly fox.

We laughed, bought our groceries, and went home, planning that one day we'd have one (or maybe two) kids. But we were in no rush. For the first few years we really just wanted to focus on being married, being best friends, having fun—and we didn't believe in living by a biological clock. Off and on throughout our first ten years, we would bounce the kid idea around, but we never felt the immediate desire. We knew that people were wondering what was up—why no kids after eight, nine, ten years? But we pretty much blocked out those voices and focused on our marriage.

About five years ago we moved into a very family-friendly neighborhood, complete with parks, children, and even a slightly weathered jungle gym in what would eventually be our backyard. I remember when we were looking at the house, we saw the jungle gym in the backyard and said, "Well, we won't have to buy one of those." At that point we just assumed kids were coming.

After each negative result, I was left thinking, This is literally never going to happen. Why are we even bothering anymore?

We tried for about a year with no results, but we didn't really think anything of it. We knew that sometimes it took time. After another year of nothing, we really kicked it into high gear with charting, temperature taking, and ovulation tests. Every month I'd get my hopes up, and every month I'd be sitting there looking at a minus sign on the pregnancy test, while everyone around me seemed to get pregnant at the drop of a hat. After each negative result, I was left thinking, This is literally never going to happen. Why are we even bothering anymore? But we did keep bothering. Somehow I felt like maybe I'd be a Rachel (Genesis 30:22) or a Sarah (Genesis 17:19), but in the end the answer was clearly no. After four years of hoping and praying and worrying and stressing, we finally decided it was best for us to stop trying.

Some days are easier than others. There are days or even weeks when I don't even think about it, and then suddenly I'm bombarded with myriad Facebook announcements and images of sonograms, newborns, and baby's first steps. And, understandably, the "likes" and comments all pour in.

I watch the people around me and their reactions to the news of a pregnancy. There's a visible excitement in the air, no matter who it is or what their relation is to that person. There are times when I see a coworker approach another pregnant coworker. I can literally count to three in my head before Coworker A starts asking Coworker B when she's due, makes comments about her baby bump, or reaches out for a touch. There are even times I see the embarrassment on Coworker B's face, as she's cornered and inundated with baby talk—as if every other aspect of her life is on hold or no longer interesting.

It's completely natural that we get overjoyed at the news of a pregnancy—a brand new life coming into this world. I totally get it and I, too, can often be seen beaming from ear to ear over the news (and I'll admit it—I've touched many a baby bump). I feel a sincere joy when I see these babies for the first time or when I teach my friend's toddler to say something funny. I love to see the latest Instagrams of my friends' babies making funny faces or spitting peas out of their noses. But sometimes I feel that the overall message is coming through loud and clear: Marriage and family is your highest attainable goal, so do whatever you can do to get there because, until then, you are not whole.

The idea of "marriage and family" is deeply ingrained in our culture, and especially in Christian circles. Most people can't fathom life without marriage or marriage without children. Recently I was in church, listening to a 50something guest speaker talk about change. He began by saying, "Life is pretty simple: We go to college, we get our first job, meet someone, and get married."

But sometimes I feel that the overall message is coming through loud and clear: Marriage and family is your highest attainable goal, so do whatever you can do to get there because, until then, you are not whole.

I groaned, shifted heavily in my seat, and whispered to Dan, "We do?"

Again I whispered, "They do? I must have missed the memo."

He went on to talk about diapers and midnight feedings, first days at school, and then college, and it ended with us as seniors, surrounded by grandchildren. He said it so matter-of-factly, as if marriage and family is this great package deal that everyone has access to and we all go through this very normal circle of life.

I looked around and wondered where this kind of thinking leaves the single mom sitting in front of me, or my male friend next to me who's in his 40s and single on purpose (yes, some people don't want to get married). Where does this leave the woman who just went through a painful divorce, or the people like me and Dan who have struggled with infertility and are childless?

I couldn't get over his "we" phraseology: We go to college, we get married, we have children. In the back of my mind I interjected my own version: We are unique individuals. We might see singleness as making us complete. We might see marriage and family differently than "a mom, dad, and 2.5 children." And we all have our own path, whether we're called to be mothers, or we're called to a particular vocation, or we don't have or want children. When our attitudes and words denote that marriage and family is the goal we were all created for, we're headed down a dangerous, polarizing path.

We've torn down the backyard jungle gym, primarily because it was rotting and infested with bees. There was something that felt so final in that act—but there was also an exhilarating, freeing feeling of anticipating what's to come. That area is now a space filled with life: It's been transformed into a huge, growing vegetable garden.

Right now I'm not sure what our future will hold as far as family is concerned. I'm trying to be content with my life the way it is and to accept the fact that we will most likely not have a family. But I'll admit it's not easy. There are the tough days when I feel like a failure as a woman and I worry that I've let myself, my husband, and my family down. There are those days when another friend will tell me of her pregnancy and I'll silently pray, Lord, please let me be happy for her. But there are also the days when I feel open to wherever God will lead us. Days when I look at my husband, Dan, and feel confident about what God has in store for us, whether that involves children or not.

Mary Bellus is an art director for Christianity Today and designs for Today's Christian Woman, as well as other CT brands. She lives in suburban Chicago with her husband, Dan. You can follow Mary on Twitter @MaryBellus.