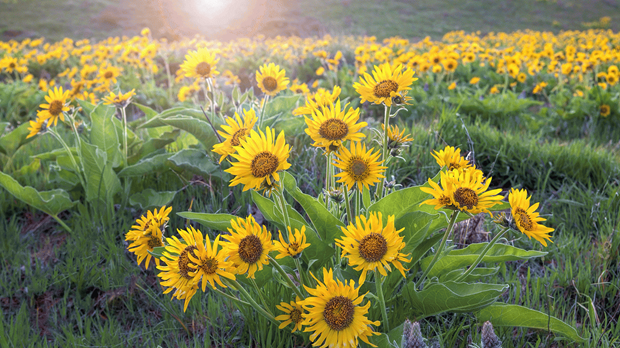 “For we are God’s bliss, for God delights in us without end.”
—Julian of Norwich*

Try to count the number of wildflowers in one square yard of mountain meadow.

Investigate just one of the nine million species of kaleidoscopic coral reef creatures that teem along the ocean floor.

Pluck some blackberries. Eat some ice cream. Let the textures and flavors dance for a moment on your tongue.

We creatures are generated in the Creator’s generosity. Every breath we take is only possible because of the benevolence of the one in whom “we live and move and exist” (Acts 17:28). But we are prone to forget.

It starts in the Garden. God makes a world exploding in diversity and abundance. Why? Not because he is a solitary being in need of companionship. On the contrary, God is already in community. The Father, Son, and Spirit live in an endless circle of love, a divine dance of mutual affection and creative energy. God makes the world out of a desire to have other beings with whom to share that love. We are begotten in generosity.

We are begotten in generosity.

Peer into the mystery for a minute. The need for the Incarnation, the Crucifixion, and the Resurrection does not catch God by surprise. The Lamb of God is “slain from the creation of the world” (Revelation 13:8, NIV). When the Godhead decides to widen the circle of love by making us, the cost is clear from the outset.

In his book Love’s Endeavour, Love’s Expense, W. H. Vanstone offers an analogy that hints at some of the depths of God’s generosity:

Imagine a family who, united in mutual love, take an orphan into the home. They do so not of need but in the pure spontaneity of their triumphant love. Nevertheless, in the weeks that follow, the family, once complete in itself, comes to need the newcomer. Without him the circle is now incomplete: his absence causes anxiety: his waywardness brings concern: his goodness and happiness are necessary to those who have come to love him. . . . Love has surrendered its triumphant self-sufficiency and created its own need. This is the supreme illustration of love’s self-giving or self-emptying—that it should surrender its fullness and create in itself the emptiness of need. Of such a nature is the Kenosis [self-emptying] of God.

This is the sacrifice hovering over the dawn of the universe. But God makes the world anyway, and he seems to relish making it “very good.” Walter Brueggemann, in his Christian Century article “The Liturgy of Abundance, the Myth of Scarcity,” describes Genesis 1 as “a song of praise for God’s generosity.” He writes, “Everything in its kind is to multiply the overflowing goodness that pours from God’s creator spirit. And as you know, the creation ends in Sabbath. God is so overrun with fruitfulness that God says, ‘I’ve got to take a break from all this. I’ve got to get out of the office.’”

The first humans are given this extravagant paradise as a playground. “Taste anything you want,” God tells them. I imagine him gesturing like an exuberant host over a verdant landscape that stretches farther than the eye can see. “The only restriction is that one tree over there, the tree of the knowledge of good and evil. Eating the fruit from that tree won’t be good for you. But everything else is yours.”

This is the first and most fundamental lie—that God is not generous, that God is miserly or petty or somehow holding out on his creation.

We know what happens next. There is an Enemy who wants to bring all this flourishing to an end as quickly as possible. So what does he do? He undermines the Creator’s generosity.

“‘You will not certainly die,’ the serpent said to the woman. ‘For God knows that when you eat from it your eyes will be opened, and you will be like God, knowing good and evil’” (Genesis 3:4, NIV).

This is the first and most fundamental lie—that God is not generous, that God is miserly or petty or somehow holding out on his creation. When that lie is believed, paradise is lost.

The Depth of Generosity

If the Creator’s generosity were like ours, the story would end there. God offered us the good stuff, we blew it, better luck next time. But that’s not what happens because God’s generosity is not something he turns on and off like a faucet. It’s who he is. And so the Father, Son, and Spirit begin to unfold the plan they’ve had from the start. The Son will pour himself out, first into flesh and then into death, all for love.

If we want to begin to grasp even the tiniest fraction of the “glorious riches” of this love (Colossians 1:27), we need to notice that God sacrifices himself not only willingly, but also gladly. It is costly beyond imagining, and yet it brings him pleasure.

Listen to how the apostle Paul puts it in his letter to the Ephesians: “In him we have redemption through his blood, the forgiveness of sins, in accordance with the riches of God’s grace that he lavished on us. With all wisdom and understanding, he made known to us the mystery of his will according to his good pleasure, which he purposed in Christ” (Ephesians 1:7–9, NIV, emphasis mine).

God is so delighted to be redeeming his creation, despite the awful cost, that he has angels sing.

It is one (astonishing) thing to give grace to the creatures who have resolutely rejected you. It’s another (even more extraordinary) thing to lavish them with it—to offer not just the forgiveness of sins but the bounty of riches (peace, hope, strength, wisdom, joy, and more) that characterize friendship with God. But it’s even more mind-boggling than that because God takes pleasure in the giving.

Paul takes another run at explaining the wonder of this reality in his letter to the Colossians: “For God was pleased to have all his fullness dwell in him, and through him to reconcile to himself all things, whether things on earth or things in heaven, by making peace through his blood, shed on the cross” (Colossians 1:19–20, NIV, emphasis mine).

Think about the Father sending the Son to earth. He oversees the proceedings, as the power of the one in whom all things are held together (Colossians 1:7) is somehow constrained and contained in skin and cartilage. God knows full well that before long the ones he seeks to save will pierce that flesh and break that bone. But still, the Father sends, and the Son comes.

And here is the depth of his generosity: the Godhead does not enact this plan with the sort of begrudging, grim-faced reluctance that typifies even the smallest of human sacrifices. No, God is so delighted to be redeeming his creation, despite the awful cost, that he has angels sing. What kind of generosity is this?

But the angel said to the shepherds, “Don’t be afraid! I bring you good news that will bring great joy to all people. The Savior—yes, the Messiah, the Lord—has been born today in Bethlehem, the city of David!” (Luke 2:10–11).

Between his cradle and his Cross, the Messiah shows us what a life steeped in—and flowing out of—God’s abundance looks like. And he offers picture after picture of irrepressible grace—God as benevolent landowner (Matthew 20:1–16), extravagant host (Luke 14:15–24), protective shepherd (Luke 15:1–7), bear-hugging father (Luke 15:11–32), and generous king (Luke 17:20–21).

If he can, the Enemy will keep us from the simple but life-giving practices of attention and gratitude.

Those last three pictures—shepherd, father, and king—come together in a little sentence exploding with generosity. “So don’t be afraid, little flock,” Jesus tells us, “For it gives our Father great happiness to give you the Kingdom” (Luke 12:32).

There is an Enemy who wants us to live in fear, uncertain of God’s goodness and blind to his gifts. “You have to scratch and claw your way into the good life,” he hisses. “You have to grab the keys to the kingdom for yourself.” If he can, he will keep us from the simple but life-giving practices of attention and gratitude.

But we can resist. We can remember that the God who had his angels shout out a hallelujah chorus in celebration of his costly grace is the God who still, in the words of the prophet Zephaniah, takes “great delight” in us. Even now, he rejoices over us with singing (Zephaniah 3:17).

Let’s listen to the music. Let’s attend the dance. Let’s be thankful. Let’s not be afraid.
Our Father is pleased to give us the kingdom.

Carolyn Arends is a recording artist (11 albums released), author (3 books published), a college instructor, and she has a master’s degree in theological studies. She lives in Surrey, BC with her husband, Mark, and their two children. Her latest eBook, Theology in Aisle Seven, is available on CTeBooks.com. You can get to know her at CarolynArends.com.