Reclaiming our beauty standard and identity in Christ
By Maria Cowell 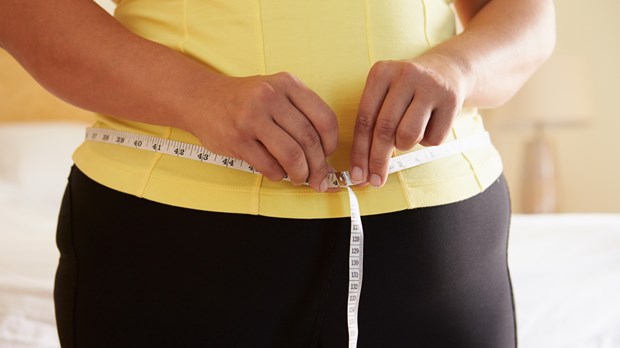 "You ought to do something about your figure!”

So admonishes the 1940s advertisement for Spencer Corsets, which promises to fix your “figure problem” and do away with bulges and sagging lines. Years earlier, before Spencer’s bold statement, the Ladies Home Journal in 1898 made advertising history by being the first publication to feature photos of women wearing corsets, promoting the 18-inch waist.

Women have certainly come a long way since the days of corsets, but an idealized standard of beauty persists. Whether it is trying desperately like Scarlett O’Hara to regain their pre-baby body via corset (or treadmill), or aiming to be a perfect “10” (as immortalized by Bo Derek in the 1979 film 10), women still hear the same message. Something needs to be fixed: your face, your legs, your waist, your breasts, your hair. You’re not hot enough, sexy enough, thin enough. And between social media, “reality” TV, and the prevalence of the selfie, technology has created an unprecedented platform to broadcast that message.

“Not much has changed in the last few decades. We still have this thing about weight and beauty defining us. The whole idea that you can’t be thin enough—even though we have record rates of eating disorders—still remains a problem,” says Dr. Linda Mintle, chair of Liberty University’s behavioral health division and a licensed clinical social worker and marriage and family therapist. She is also an author, with numerous books and articles on the psychology of weight and body image. “The cultural pressure to be thin is so intense,” Mintle wrote for Beliefnet.com, “that 9-year-old girls are dieting and teen plastic surgery is on the rise. Thousands of dollars are spent on shaping, cutting, stapling, and lopping off parts of the female body.”

Before a woman even cracks open a glossy magazine, she needs to daily renew her mind, take captive her thoughts, and affirm she is an image-bearer of God.

Mintle explains, “Women are still pressured, primarily through media, to look good. We are so plugged into our technology, we see advertisements continuously. One study found the average person looks at 3,000 images a day, up to 5,000 in urban areas. We know those images are altered [and] use professional lighting and makeup, yet they still do a number on how we feel about ourselves.”

The impact of such pressure is confirmed through an industry that benefits from women’s body dissatisfaction. Despite an economic recession, plastic surgery is booming. The American Society of Plastic Surgeons (ASPS) reports nearly 14 million cosmetic procedures done in 2012; collagen and Botox injections, breast implants, buttock lifts, nose jobs, and chin lifts are the top five. Combined data from the ASPS and the National Institutes of Health show nearly 5 million American women got breast implants as of 2010 as well as a 39 percent increase in breast augmentation from 2000 to 2010.

But recently there has been some cultural pushback. Videos such as “Try” by singer/songwriter Colbie Caillat tell women self-acceptance trumps artificial beauty standards. Caillat visually pairs the music with liberating images of women removing their makeup. The Dove Campaign for Real Beauty this year celebrated a decade of public discourse on female beauty (albeit amid questions about whether its motive was to truly help women or pump up sales).

The slogan “I Am Enough” has been seized upon by bloggers and championed on Facebook and Pinterest. Also popular is Meghan Trainor’s pop song, “All About That Bass” which uses salty language to let women know they don’t need Photoshop or a size 2 to be beautiful (although the message is tempered by the overarching theme that size, be it small or large, is still tied into male sexual desires). American Idol season 12 winner Candice Glover, a plus-size woman, brought down the house with “I Am Beautiful.” Beyoncé, J.Lo, and Jennifer Lawrence also talk about and promote realistic body images.

“There seems to be a groundswell of several celebrities who are influential and are tired of always having to diet and look a certain way,” Mintle says. “The feminist movement has been on this for a long time, “but for some reason . . . ordinary women don’t take charge more and say no. There haven’t been enough women who say, ‘We are not going in that direction,’ but I think that’s changing.”

Seeking Our True Beauty and Identity

But are celebrity pushback and anti-culture campaigns enough? 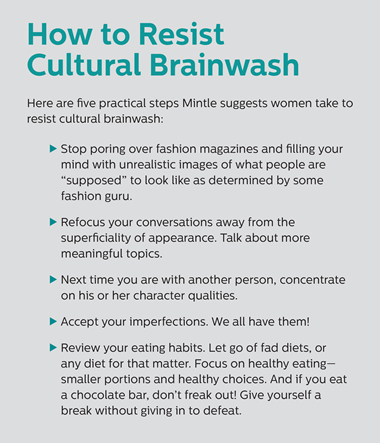 Those help to begin conversations about the issue, but the real battle isn’t about dress size or the courage to appear in public without makeup. Before a woman even cracks open a glossy magazine, she needs to daily renew her mind, take captive her thoughts (), and affirm she is an image-bearer of God (). She needs to recall the words of the apostle Paul in Romans 12:2: “Don’t become so well-adjusted to your culture that you fit into it without even thinking. Instead, fix your attention on God. You’ll be changed from the inside out” (The Message).

“Women need to replace those self-recriminating thoughts with the truth: that our identity is in Christ, and resist talk that you aren’t good enough,” Mintle says.

That was the battle Laurie Barnts, 37, faced after years of anorexia and bulimia. In high school, she came home from summer camp with a few extra pounds. A friend told her she could throw up to stay slim, and that started her down a dangerous road. It also didn’t help that she married at 18 and her husband, John, was a musician in Los Angeles, an industry in a city known for its obsession with appearance.

Barnts aspired to be a singer, but the family moved to Mississippi a couple years ago. After a year in Jackson, she realized the pressure she felt in L.A. to always look good was gone. One night in Bible study she had a breakdown, fearing she would never be a singer. In that moment, she realized her pursuit of that goal had become idolatry. “I was worshiping my singing more than God.” She wondered if her obsession with body image was also a form of idolatry.

“It really hit me like a ton of bricks when I realized I had a problem. I kept thinking How can I be a good Christian and have this problem? Realizing my identity in Christ was a huge part of the solution,” she says.

By shifting our perspective from the mirror to our Lord, we can begin the hard work of refocusing on what matters most.

That epiphany has given her progressive breakthroughs and victory, but she doesn’t call her journey a struggle. Instead, she prefers to call it an opportunity.

“This is an opportunity to depend on Christ. I need him for light in this area. It is definitely a spiritual battle. If we keep our eyes on ourselves, the Enemy wins. I would tell any woman struggling with body image issues to aggressively pursue the Lord. Go after him until you hear his voice and don’t walk away until you know he is in it with you. I know the feeling of hopelessness, but the answer is an actual relationship with him, not how you look.”

Barnts believes in addition to spiritual connection with God, there are practical steps women can take to fight cultural pressures regarding body image. The first one, she says, is to simply talk about what’s important, and redirect the conversation if necessary.

“I would think if we were to function as the body should function, we would build each other up by talking about what really matters. When John married me, he found me attractive, but he knew my issues. Men usually tell their wives they are good looking, but he knew that would actually damage me by putting the focus back on the external. He would compliment me in areas that would direct me inward. We need to think about what is best for the other person.”

Though women have come a long way since the days of corset-shaming, there is still a long road ahead. By shifting our perspective from the mirror to our Lord, we can begin the hard work of refocusing on what matters most: our relationship with our Creator who loves us, imperfections and all.

Maria Cowell is a TCW regular contributor. A communications coordinator, freelance writer, and mom of three teenagers and young adults, Maria is passionate about empowering women to live the lives God desires for them. Join Maria in conversation at @HipMamaMedia or at HipMamaMedia.com. 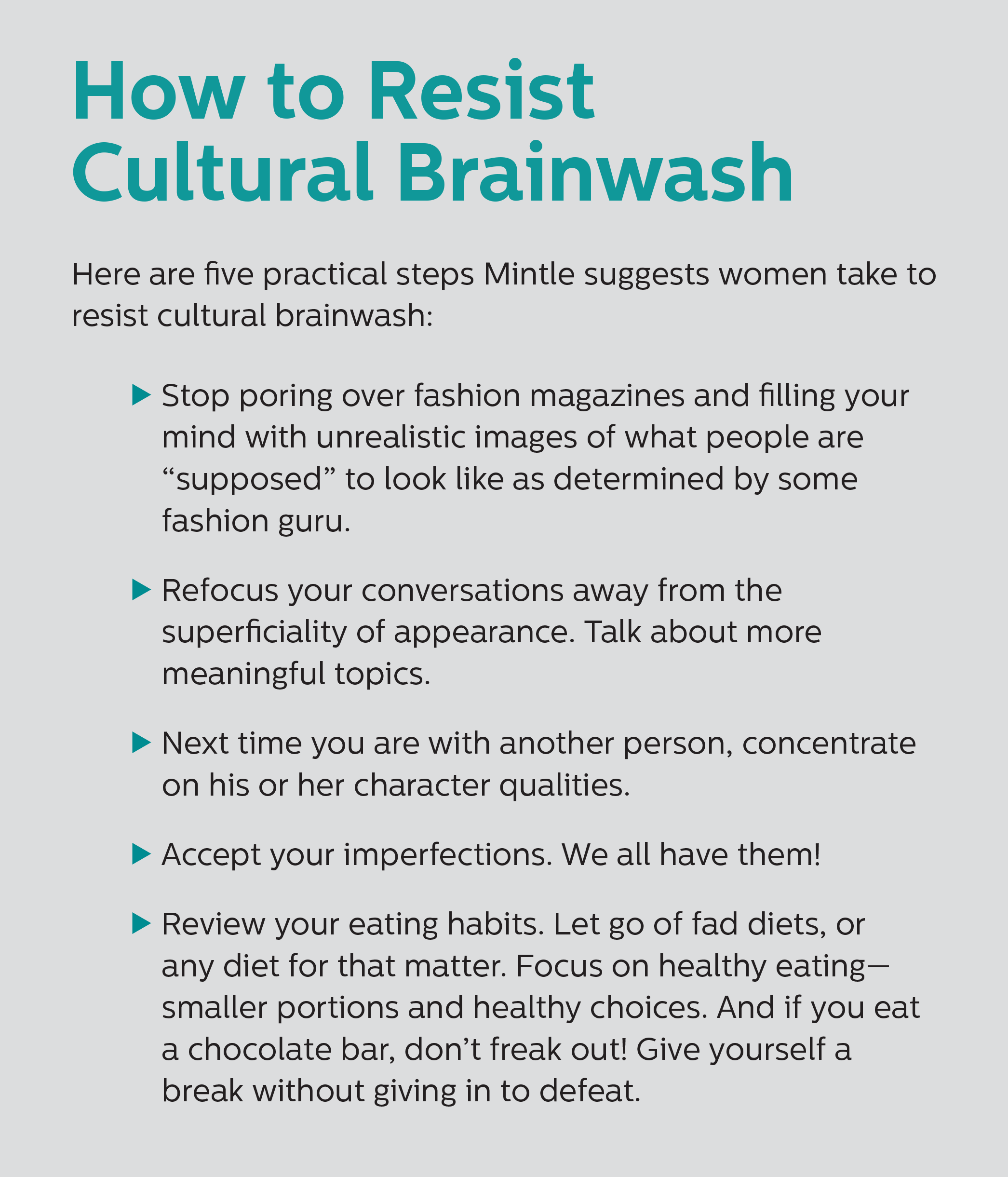