(It all starts with you, Mom and Dad.)
Jolina Petersheim 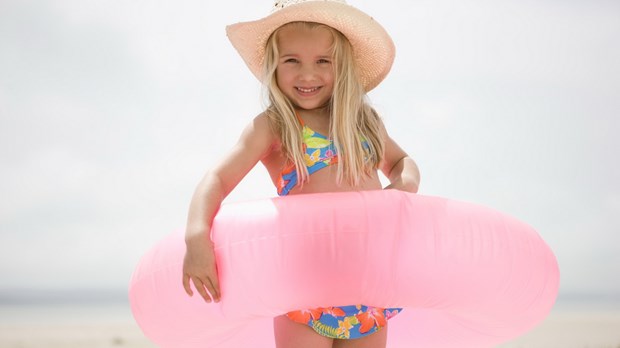 I was sitting on the beach in Sarasota, Florida, with my best friend, her sister, and my daughter when two men carrying surfboards strolled by.

They were in their late 30s or early 40s, seemed respectable, or as respectable as one can appear in a wet suit.

And then—in the midst of eating our picnic lunch—we overheard the blond man comment to his friend: "I love coming out here and seeing all these underage chicks in bikinis."

I looked over at my own little girl—two years old, with a fountain ponytail—mixing blue Play-Doh into the sand. She was wearing a one-piece bathing suit beneath her cover-up and sweater.

And yet I imagined her out there on the beach 14 years from now.

I imagined some lecherous surfer eyeballing my daughter, and it was everything I could do not to chase after that blond-haired man, jerk the surfboard away from him, and use it to bonk him over the head.

However, despite my anger toward that man, I was also angry at the parents of those underage girls.

It was so cold on that beach I was wearing a light sweater and rain jacket over my cotton dress.

And I could easily see the underage girls that man had been referring to—parading down the packed strip of sand in sparkly bikini tops—and I wondered why they weren't being protected the way they deserved.

Two weeks after I returned from the beach, the ultrasound revealed that my husband and I were expecting another little girl this September.

Staring at the screen, I thought again about what that surfer had said and the flippant tone in which he'd said it, and I wondered how I could protect my daughters the way they also deserve.

I have the responsibility of raising my daughters to become women who do not feel their value lies merely in physical beauty.

I have the responsibility of raising my daughters to become women who do not feel their value lies merely in physical beauty.

I want my daughters to feel beautiful; I want them to embrace their femininity, but I also do not want some 35-year-old surfer to be ogling this beauty that should only belong to them and to their future husbands.

I cannot tell you how ironic it feels to be typing this.

I attended a strict private school from the time I was in K-5 until 12th grade, and for the majority of those 13 years, I rebelled against the dress code.

My skirts came just a little above the knee when the hem was supposed to end in the middle. I wore heels that were three inches instead of the regulatory two.

There was not much I could do with uniform polo shirts, but if I could've made them more alluring, I would have.

I knew I wanted to remain a virgin until marriage, but I still rolled my eyes at the analogies regarding purity such as a Snickers bar that was scraped on the bottoms of our sneakers as we girls sat Indian-style on the gym floor.

Back then, I rolled my eyes because I thought the analogy was archaic and embarrassing.

However, as a 27-year-old mother, who's seen more of life than I had back then, I cringe because I think of those who must've been sitting on that gym floor beside me, feeling as valueless as a candy bar scraped on the bottom of numerous pairs of shoes.

God still wants those girls, regardless of what they had done, what had been done to them, or what clothes they put on when they got home from school.

I do not want my daughters to have to sit through the same analogies of purity that I did, because I want them to perceive their purity as something far more precious than an unopened Snickers bar or a lollipop kept in its wrapper.

Purity is not just about virginity.

It is not just about keeping the hem of the skirt to the middle of the knee or wearing a one-piece bathing suit.

Purity is truly about the heart.

Purity is not just about virginity.

A synonym for purity is transparency, and I believe if we are truly pursuing God's heart, if we are truly willing to reveal our weaknesses, he will be able to direct us—daughters and mothers—in these nebulous areas that we have to wade through in this modern age, as diverse as how to teach purity through relationship with Christ rather than religion and—when going to the beach—if it is more appropriate to wear a tankini, bikini, or a one-piece bathing suit.

I pray that by the time my daughters are 16 years old, they will have such a close relationship with God that he will be able to guide their steps and their standards without me having to do it for them.

The challenging part is that, in order for them to have such an intimate relationship with Jesus Christ the secular world does not hold its normal sway, I have to first set the example in conduct, in love, in faith, and in purity, just as instructs.

I know I cannot do this on my own, as I now know that mothers struggle with a sin nature just like their children. However, if I remain transparent before the Lord, and even before these precious daughters of mine, I believe they will learn that even when we make mistakes, God is eager to draw us to himself and make us pure in heart again.

A version of this article originally appeared on Southern BelleView Daily and is used by permission of Jolina Petersheim. Jolina is the bestselling and award-winning author of The Outcast and The Midwife (May 2014, Tyndale). Find Jolina on Twitter @Jolina_Joy or at JolinaPetersheim.com