Questions about God can be faith builders—if we handle them correctly
Dr. Kara E. Powell 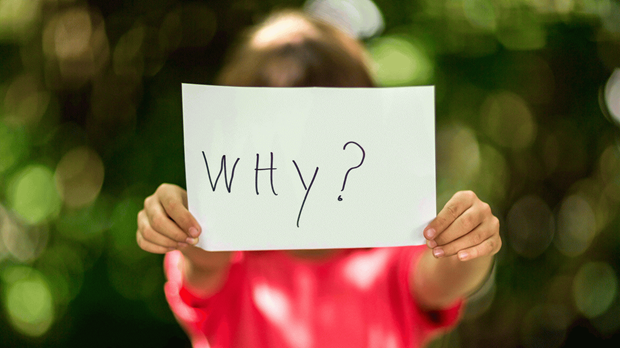 Stomping in circles around her room, my 11-year-old struggled for words to express her anguish.

“I’m just so mad at God. Why would God let Chrissy die?”

Chrissy was one of my closest friends whose body finally surrendered after an 18-month battle with terminal cancer at age 45. Our family is quite close to Chrissy and her family, and we had journeyed the 18 months of doctors’ appointments and chemotherapy with them.

My initial response that night. . . would impact whether her tough questions were faith builders or faith busters.

But four months later, the cancer was back. Two months after that, Chrissy was gone.

As Krista paced in circles around her room, she looked at me with tears in her eyes and asked: “Why would God give us the good news that Chrissy was healed and then let her die? Who would do that? A person wouldn’t even do that!”

Can Our Kids' Tough Questions Build Their Faith?

As I sat on the edge of her bed, I knew Krista was at a crucial faith juncture. My initial response that night—and the ongoing dialogue I had with her for the next few months—would impact whether her tough questions were faith builders or faith busters.

Research indicates almost 50 percent of youth group seniors drift from God and the church after graduation. To try to understand why this is, and what families and congregations can do about it, the Fuller Youth Institute studied more than 500 youth group graduates and 50 families to identify what builds faith that lasts, or what we call “Sticky Faith.” Our research reveals that our kids’ tough questions about God and faith can be faith builders—if we handle them correctly.

The Danger of Unexpressed Doubt

While parents often worry their kids’ doubts are “wrong” or “sinful,” our research brings a counter perspective. In our study of 500 students, young people who feel the freedom and have the opportunity to express their doubt actually have greater faith maturity than those who don’t.

So doubt in and of itself isn’t necessarily toxic. It’s unexpressed doubt that is most toxic. Unfortunately, less than half of the students we interviewed have shared their doubts and struggles with an adult or friend.

Perhaps our kids stay silent because we as parents are too afraid or too busy to talk about tough subjects like doubt. Many of us have a mental list of topics we hope we can avoid discussing with our kids.

Perhaps our kids stay silent because we as parents are too afraid or too busy to talk about tough subjects.

Sex is certainly on that list. According to two different sets of data, the more important religion (including Christianity) is to parents, the more difficult it is for those same parents to talk with their kids about sex.*

I find that both sad and ironic. As followers of Christ, we should be at the front of the line to talk with our kids about sex because we know that sex, when done right, is really right. Somehow with sex (as well as other controversial topics), our families have been robbed of healthy, balanced, scripturally guided conversations—the type of conversations that foster Sticky Faith.

Many of the Sticky Faith parents we interviewed had structured family conversations and Bible studies, especially when their kids were in elementary school. Yet those same parents often commented that their best discussions were those triggered by life, not a planned schedule, such as when their daughter was getting hurtful texts late at night, or when their son was wondering why God would allow his closest friend to suffer the pain of his parents’ divorce.

As one dad explained, “Often, if I just start talking to them about faith, they have a tendency to put up a wall. Our discussions are much better when they start with something they’re experiencing and then move into how God relates to that area.”

What to Say When Your Child Stumps You

Let’s return to Krista stomping around her bedroom. Because of our Sticky Faith research, as I was perched on the end of her bed, I said four key words—four words we recommend to parents and grandparents when their kids’ questions extend beyond easy answers: “I don’t know, but . . .”

In the case of Krista, I replied, “I don’t know, but I am so grateful for the time I had with Chrissy.”

When your child asks you a question that stumps you, instead of avoiding them or pointing them to vague platitudes, respond by saying, “I don’t know, but. . . "

A few nights later, as Krista was emptying the dishwasher, she opened up again about her grief: “Mom, I’m still mad at God. And Jesus. I just don’t get why Chrissy had to die.”

I responded, “I don’t know, but in times like these, Romans 5:3–4 helps me.” After she put the last glass away, the two of us leaned against the kitchen counter talking about Paul’s teaching that suffering leads to perseverance, perseverance to character, and character to hope.

When your children ask you a question that stumps you, instead of avoiding them or pointing them to vague platitudes, respond by saying, “I don’t know, but let’s study that question together and see what we come up with.”

Or, “I don’t know, but let’s meet with my friend who loves talking about questions like that and see what she has to say.”

In the midst of my kids’ struggles and doubts, I want my daughter to know I can handle her biggest questions. More importantly, God can too.

Kara E. Powell, Ph.D., is the Executive Director of the Fuller Youth Institute (FYI) and a faculty member at Fuller Theological Seminary. Named by Christianity Today as one of “50 Women to Watch,” Kara serves as an Advisor to Youth Specialties and also speaks regularly at parenting and leadership conferences. Kara is the author or co-author of a number of books including The Sticky Faith Guide for Your Family, Sticky Faith Curriculum, Can I Ask That?, Deep Justice Journeys, Essential Leadership, Deep Justice in a Broken World, Deep Ministry in a Shallow World, and the Good Sex Youth Ministry Curriculum.