Deciding how to care for aging parents
Virginia Stem Owens 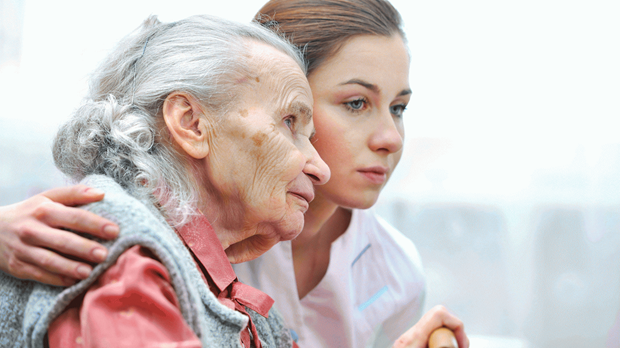 One day a year or so ago, my father found my mother lying on the bedroom floor where she had fallen while tucking in a sheet. Her collarbone, they discovered at the emergency room, had snapped when she fell. It was an entirely predictable consequence of her combined ailments—Parkinson’s disease and osteoporosis. Something else appeared to have broken in my mother as well, however. Confused and fearful, she took to wandering from room to room at night, looking for intruders. My father, 80 years old and profoundly deaf, felt helpless to deal with the rapidly deteriorating circumstances of their lives.

Since then, my husband and I have moved back to Texas and now live just down the road from my parents. During the past nine months, my father has had three operations, including a triple bypass. Between the two of them, they have seen a total of 12 different doctors over the past year. I have become an expert at reading medical billings, insurance claims, and Medicare statements. My computer’s Web browser is bookmarked for a number of disease and medication sites.

Parents—mothers especially—are the oldest things we know about the world . . . . When they begin to weaken, we feel the foundations tremble.

My parents are scrupulous people who wanted to cause their children as little trouble as possible. Since I am the executor of their wills, they long ago gave me copies as well as a key to their safety deposit box. They made sure I knew where to find their insurance policies. I was present when they planned and paid for their funerals. We had all prepared for death. What we hadn’t prepared for was decline. I soon found I needed a crash course in what is almost as inevitable as death—caring for aging parents.

Four in ten Americans presently care for their aging relatives. I would imagine, however, few parents actually sit down with their grown children and talk about what’s going to become of them when they get old and infirm. Once they edge past 60, they find themselves using the stark words “old” or even “elderly” less frequently, even though they may still joke about failing memory and “senior moments.”

At 70, though, they often greet references to Alzheimer’s and Depends with prickly rejoinders that old age comes to us all eventually. Very few children are willing to face, much less force, the issue with either their parents or their siblings. And not simply because they fear being thought ghoulish or insensitive. What we fear goes much deeper.

Parents—mothers especially—are the oldest things we know about the world. They are an archetypal necessity in the structure of our universe. When they begin to weaken, we feel the foundations tremble.

Faced with our parents’ inevitable decline and mortality, we must choose then between causing pain by broaching unpleasant realities and conspiring in the dangerous illusion that everyone maintains good health and mental competence until the moment we draw our last breath.

I have noticed the tone of pride and satisfaction with which middle-aged children in America announce that their 80- or 90-year-old mother “still lives in her own house,” as if voluntary isolation were the pinnacle of geriatric heroism. In other parts of the world, however, people would find this arrangement both strange and shameful. Most older people on this planet today live close to, if not in the household with, their children. At least until the last couple of decades, three-quarters of Japan’s middle-aged children cared for their aging parents in their homes—almost eight times the rate in this country.

Independence. Autonomy. Isolation. On this unstable trinity the lives of older Americans are precariously balanced.

A bewildered delegate to a U.S.-China writers’ conference once asked the American author Annie Dillard, “The old people in the United States—they like to live alone?”

No doubt some of them do. Independence is, after all, the chief and most honored virtue in this country. Losing one’s independence is, for Americans, a shameful thing. And needing help, we know, evokes in our potential benefactors pity, frustration, and fear—in roughly equal parts.

Independence. Autonomy. Isolation. On this unstable trinity the lives of older Americans are precariously balanced. But if you live long enough, independence inevitably becomes an illusion. You can no longer keep up with the yard work, so you move to a condominium or even a retirement center. You can’t see well enough to drive anymore. The checkbook gets tangled in knots, the Medicare maze impossible to negotiate.

Seeking help with these mundane chores of living means surrendering control as well. If you ask others to take you to the grocery store, you must fit your shopping to their schedule and preference for supermarkets. Rely on Meals on Wheels to deliver your dinner and you have to accept unfamiliar dishes. After a lifetime of doing and having things your own way, you may have to work at feeling gratitude.

Of course, the fear of losing control of one’s own life afflicts middle-aged children—my generation—as well. We are as skittish about pledging an unknown number of years to the care of our increasingly needy parents as they are about surrendering their autonomy. No wonder it typically takes a crisis to break through our denial. A parent has a heart attack or a wreck, falls ill, or falls down. You rush there, shocked not only by the disaster, but the deteriorated living situation. How could things have gotten so bad without your knowing about it?

We are all, throughout our lives, a burden to others. From the moment of conception, we are nourished and nurtured by others.

You call your siblings, if they make reliable allies, and only then do you talk about what you’re going to do about Mom or Dad. You mentally inventory the entire family for the most flexible schedule, the most plentiful resources, the most compassionate or cooperative spouse. And no matter how much you love your parents and want to see them well cared for, you feel your own stomach clench as you try to imagine the future. Two sets of people, each with deep though unspoken fears and reservations, must now work out a way of dealing with a difficult situation. They will feel frightened, powerless, cornered, and overwhelmed. Their respective worlds are about to be turned upside down.

At this point, my parents live in their own home, but only because my father can still fix their breakfast, help my mother to the bathroom, and call for help if she falls. And also because I am nearby for emergencies—and to schedule and take them to their doctors’ appointments, supervise their many medications, monitor their nutrition, and find suitable and reliable household help for them.

At night I lie in bed wondering how much longer my father’s own precarious health—and strength—will hold out. What will I do if it doesn’t? My parents’ resources are not sufficient to hire round-the-clock nursing.

I still have many questions and quandaries about the future—my parents’ and my own. But since coming back to Texas to help with my mother’s care, I have at least learned not to repeat that oft-repeated cliché that undergirds and perpetuates our idolatry of independence: I don’t want to be a burden to my children.

Even though nothing is more predictable, Americans simply aren’t much good at—and consistently fail to prepare themselves for—either bearing or being burdens.

We are all, throughout our lives, a burden to others. From the moment of conception, we are nourished and nurtured by others. As adults we learn to pay for or negotiate our mutual needs, but the fact remains that it takes an invisible army of other people to grow our food, clean our clothes, maintain our roads, fuel our furnaces. When we marry, we accept another’s pledge to stick with us in sickness and health, prosperity and poverty. The load we lay on others only becomes more visible, less deniable, as we age. Even though nothing is more predictable, Americans simply aren’t much good at—and consistently fail to prepare themselves for—either bearing or being burdens.

Nothing in our culture to date encourages us to accept the reality of our future liability. Instead, we are enticed to believe in the Centrum Silver myth: that our latter days will be spent on cruise ships or jogging into the sunset, not alone but with our spouses. The truth is, though, should I live another 20 years, I will be a burden—to my spouse or my children or the state, if not all three. What I most want to learn during those decades, therefore, is not how to live longer, not necessarily even how to live a healthier or more productive life, but how best to be a burden. One that might also be a blessing.