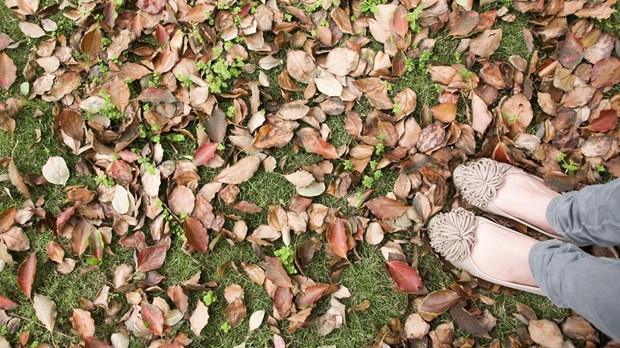 My high school P.E. teacher used to say that a healthier you is as simple as putting on your running shoes and closing the front door behind you. His point was simple: don’t worry about a big plan or even a specific destination. Just go.

Wouldn’t it be great if becoming more brave was that simple as well? Actually, I think it can be. Pastor Andy Stanley says that sometimes when you can’t decide what to do next, just doing the next best thing is a great start. Trying to figure out the long-term future or how to tackle a complicated plan can be paralyzing if we try to attack it all at once. Sometimes it can seem so overwhelming that we end up doing nothing at all. I think tackling courage (or fear) can be just as paralyzing if we let it.

I remember the first week of middle school like it was yesterday. In my head I was working with a theme: Sherry, the fun girl. I determined that year would be different—that it’d be a year of exciting new adventures. Now that I was in seventh grade, I was going to bravely make new friends. I had a list of must-dos that included trying out for the cheerleading squad and joining the writer’s club, and of course, my hair would be fabulously perfect every single day.

I quickly realized that being brave is easier if you don’t do it alone.

But the first week of school came and went with no earthshaking changes. I thought about all the fun opportunities. I wanted to say hi to that new girl sitting next to me in math class. I listened carefully to the new club opportunities that my homeroom teacher announced. But did I get around to actually doing anything? Nope.

I began to get stuck in the weeds of imperfect choices. I could sign up for that afterschool club, but it meets on Tuesdays and I really wanted Wednesdays. That girl looks nice, but we only have one class together. The list of girls who had already signed up for cheerleading tryouts is huge; I don’t stand a chance!

Do you ever hear that voice? It’s a scaredy-cat, timid whisper that warns you to slow down, to not take any big chances or do anything you might regret. Most importantly, don’t embarrass yourself.

I’m tired of that voice. It’s too cautious. It makes me think small and miss the great opportunities that are right under my nose. It makes me slow and makes life boring. It makes me less than who I know God made me to be. So I’m declaring war. I’m pointing my stubby finger right at that voice and calling it what it is: fear. And I’m not going to stop at finger-pointing; I’m going to get busy. Here are some super-simple steps that have helped me when I get stuck in fear.

In the case of my middle school angst, as soon as I told a friend about my theme, she surprised me by wanting to jump in and help. She not only offered to join a new club with me, but she also put her name next to mine on the tryout list. I quickly realized that being brave is easier if you don’t do it alone. How about you? Is there a new idea or opportunity that is calling your name? Maybe the first step is a conversation. Is there a friend or mentor that will hold you accountable, or even better, join in with you? Call her now.

When going after something new, it’s helpful to bring our expectations down to real life and go after what really matters.

Ask Yourself, What’s the Worst That Could Happen?

I always tend to blow up the “what ifs” to be much bigger than they really are. My husband likes to remind me that even if a new idea goes bad, I’ll still be alive tomorrow. He’s right. Even if I fail or if it’s a less-than-best idea, it’s not going to kill me. Ask yourself what’s really holding you back. Look it straight in the face, stick your tongue out at it, and go. If it’s something that really does entail risks, test out ways you could mitigate them. I recently heard someone share advice about learning to ride a bike for the first time: get a bike low to the ground and wear a helmet. It’s good thinking that you can apply to a new idea or opportunity. Learn all you can, be smart, and then try it.

Ask Yourself, Will I Be Proud That I at Least Tried?

If the answer is yes, you need to go for it. If you aren’t sure what to do first, ask yourself, What’s one good thing that I can do to get started? It may not be the perfect thing but at least you are moving, and it will probably lead you to a better thing. Here’s what I’ve learned: Doing nothing usually brings disappointment. Doing something at least makes you proud that you tried. Don’t aim for perfect; go for proud.

Let Go of the Unrealistic

Was it even possible that my hair would be fabulous every day? No. Did it even need to be? No. When going after something new, it’s helpful to bring our expectations down to real life and go after what really matters. What’s the one brave thing you really want to accomplish? Go for that, and let the rest go.

So what is it that you’d like to try that seems scary? Is it a new career or job opportunity? Is it just reaching out to a new friend? Is it a new volunteer leadership opportunity? Spend some time talking to God and give him the space to tell you what he thinks. Then, it may be time to squash that timid voice and take that brave first step.