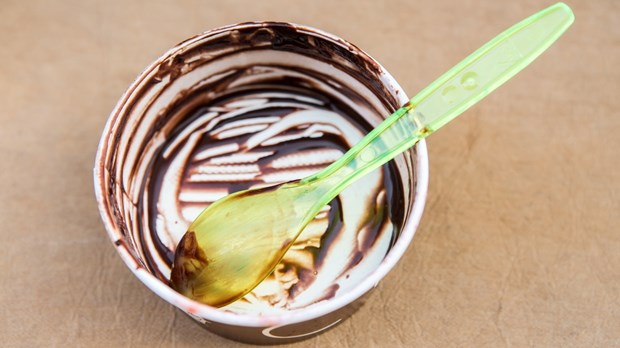 One of my pastors, I’ll call him Jeff, is also a dad to a five year old. One Sunday he told the story of receiving a call from a mom down the street who said, “I don’t think our boys need to play together anymore. Please come get him.”

Jeff’s son, whom I’ll call Noah, was friends with this woman’s son and often played at their house. But while visiting that day, Noah had broken something. It wasn’t just an ordinary something but a special truck the woman’s son had received for Christmas. The mom told Jeff that Noah had gotten mad, picked up the truck, and flung it across the room.

The words out of control flashed through Jeff’s head, and he raced off to pick up his son and read him the riot act. On the drive home with Noah, Jeff repeated the things he and his wife, Amanda, had talked about many times with their family: “You can’t behave that way! We don’t lose our temper and smash things. That’s not the way we act in this family because we treat others the way we want to be treated.”

Jeff hoped he made an impression on his young son’s heart, but he wasn’t sure.

A week later Amanda called him at the office to say that a pair of headphones were broken. Noah, in a fit of anger, had slung his dad’s new headphones outside on the sidewalk over and over like a whip, smashing them to bits.

Jeff felt desperate. What should he do now? As he headed home to deal with the situation, a parable popped into his head. It was the story of the crazy landowner who paid his part-time workers the same as those who had worked all day (Matthew 20:1–16). It seemed weird that this story had come to mind on that particular day.

When Jeff arrived home, Noah was waiting to receive the consequences for what he’d done: the punishment, the scolding, the loss of privileges. The look on his face said he knew it was coming. Rather than dishing out punishment, Jeff pulled a bowl out of the cupboard, filled it with ice cream, and topped it chocolate sauce, his son’s favorite. He placed the bowl on the table, and he and Noah ate together while they talked.

You might be thinking the same thoughts I did as I listened to Jeff tell the story. How will his son ever learn how to behave? How will he get control of himself? Rewarding misbehavior with ice cream? That’s a recipe for raising a brat!

Grace of My Own

As I pondered, however, I recalled a story of my own. When I was a young, inexperienced children’s pastor, our team put on a monthly family production called KidStuff. Filled with skits and games and crazy lessons, it was designed to share biblical principles in a way that engaged young families and inspired further conversations at home.

One of these events included a lesson about God’s lavish love for us, and to illustrate the point, we ended the evening by throwing confetti all over the auditorium. To add even more excitement, I had arranged a balloon drop from 40 feet overhead. Balloons and stuffed animals rained down on the kids’ heads. As children rushed to get a balloon and a toy, remnants of the pizza and soda we had served earlier were ground into the carpet. Later, while trying to clean up the mess, I realized that the confetti had sunk into the crevices of the sound system and ruined it.

I intended to create a lesson the kids would never forget. Instead, I had created a nightmare.

The next day I sat with my senior pastor, who was clearly not happy. I wasn’t afraid for my safety, but I did worry about losing my job.

Instead he said, “Let’s talk about what you learned.” I shared what I had intended to happen, and then we came up with a plan to fix the damage. I walked away in awe. I didn’t get fired. I didn’t have to pay for the sound system or the carpet. I didn’t get what I deserved.

The Power of Forgiveness

Grace is sometimes hard to come to grips with, isn’t it? I’m blown away when I experience it. Romans 5 tells me that at just the right time, while I was powerless, Christ died for me. For me, a person who has rotten thoughts, whose heart is corrupt. A person who wants to do right but makes the same mistakes again and again. And at the moment that Christ died for me, I hadn’t even been born. Yet he knew I would need him.

Beautiful grace. It’s transforming. Titus 2 tells us the grace of God has appeared, bringing salvation for all people, training us to renounce ungodliness and worldly passions and to live self-controlled, upright, and godly lives in the present age.

Grace can change us if we will let it.

In his sermon, Jeff continued the story about Noah. As the two sat eating ice cream, Jeff told the boy, “I’m not giving you ice cream because you’ve earned it. I’m giving you this because you are my son and I love you.” His son was surprised (and a little shocked). That bowl of ice cream opened a great conversation about God’s love and forgiveness and the change it can bring to our lives.

Giving as Good as We Get

Powerful indeed. I love getting grace, but giving it doesn’t come so easily. I want others to judge me by my intentions, but I often judge them by their actions. And when someone else seems to be getting away with something, the words That’s not fair! rise up pretty fast. That causes my heart to bind up with jealousy and pettiness and all manner of yuck. God knows this robs me of the joy that grace can bring to a relationship. He knows that if I will give grace to others, out of the abundance he has given me, I will become who he designed me to be.

So I’m going to slow down and remember the chocolate sauce. Today and going forward, I’m reminding myself that no, it isn’t fair. Grace isn’t fair, but it is transformative, and I must let it be so. I deserve death, but I get life. I deserve to be condemned for my sins, but instead I get the chance to try again. And I can allow that grace to transform me with patience and gentleness and love for others even when they don’t deserve it. Because when I connect the incredible God-grace for me with the chocolate-covered-ice-cream-grace from me, we all win.