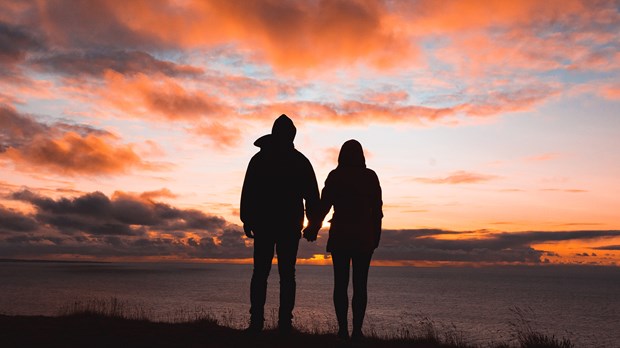 “Emma, why won’t you come along?” my husband asked. “You need office supplies, don’t you?”

Usually I preferred to go to the store alone, but I needed a few things so I joined him.

At the store my husband James seemed to be making a game of how many times he could criticize me. He criticized what I wanted to buy, the color of items I chose (“That journal is a putrid color.”), my decision to ask a clerk for help, the necessity of my purchases.

Because I felt overwhelmed, I found myself counting his criticisms. I should have kept my numbers to myself. Instead, when we got home I announced the criticism count: 15.

That day as I reflected on our married life, I realized that each of us has struggled with a critical spirit because of the example of our parents. This has often led to loud and sometimes verbally violent fights, or withdrawing from each other because of feelings of hopelessness. We struggled to believe that we’d ever be able to get along.

We struggled to believe that we’d ever be able to get along.

I used to be hypercritical of my husband, especially regarding spiritual matters, but God has faithfully worked in my life to teach me to hold my tongue and reserve judgment. But I still needed to learn how to handle it when my husband criticized me—especially during stressful circumstances.

Since our trip to the store, I’ve prayed consistently about the issue. God has shown me six ways I can respond to James’s criticism that will preserve our love connection.

A criticism war can be aborted if I take the time to invite God into it early on.

My friend Denise, who’s one of the sweetest people I know, told me her husband calls her “cruel” and “unforgiving” when she voices her hurt over his rejections. She says he was abused by his mother and imagines that Denise is like her.

“I ask the Lord, ‘Who do you say I am?’” Denise told me. “God has shown me that my husband has an impaired judgment of me—that God alone has to show him who I really am.” She added, “God has revealed that I need to have an attitude of ‘I don’t receive that’ when he belittles me. And I try to see where my husband does good and speak to him about that.”

Years ago in the midst of harsh criticisms, the Lord whispered to me, Ask me what I think of you. The words God spoke to my heart that day started melting my shame over not being a perfect wife. I realized I’d never be perfect in James’s eyes, but my goal became having a blameless heart toward God.

Too often I’ve looked to my husband to build me up or even heal me, but he can’t. God has repeatedly built me up, drawn me closer to himself, healed my heart—even from wounds inflicted by the love of my life.

When I cry out to God, he also gives me compassion for James instead of focusing only on my hurt.

After crying out to God, he faithfully reminds me of what his Word says, ”Never pay back evil with more evil” (Romans 12:17).

Why is it that I want to do the opposite of what that verse says? My flesh yearns to do what comes naturally. But God calls me to have a supernatural response, and that comes only from relying on him and allowing his love to flow through me.

Since I know my husband’s issues are tied to his insecurity as a man, instead of making things worse, I can choose to build him up.

My friend, Linda, told me her husband recently walked into the kitchen just to criticize her cooking. She was already feeling overwhelmed by his repeated criticism, but instead of returning the criticism, God led her to sing, “Jesus loves me, this I know,” out loud. The criticism stopped, and he left the room.

God has shown me that I don’t have to stay and let my husband batter me with criticism, which tempts me to be critical in return—I can leave the room or go for a walk. At times when criticisms become intense, I go for a visit to my parents’ home. Ironically, my dad is no longer critical, and he and my mom build me up, so being there actually allows healing of my childhood wounds. I've learned not to be critical of James when I’m with my parents.

Going to a counselor has also helped me to renew my compassion for James. He recently joined me for some counseling sessions, and we made major breakthroughs in our relationship.

3. Build up Your Spouse

Since I know my husband’s issues are tied to his insecurity as a man, instead of making things worse, I can choose to build him up. One way I do this is to notice what he does right and thank him for it. James repeatedly does thoughtful acts for me like picking up things we need from the store without me asking him, buying me flowers, taking care of items around the house that need to be repaired, maintaining our yard—the list goes on. As I focus on these and thank him for all he does for us, my desire to answer criticism with criticism goes away, and he criticizes me less.

A verse the Lord has brought me back to again and again is Ephesians 4:32, which says, “And become useful and helpful and kind to one another, tenderhearted (compassionate, understanding, loving-hearted) forgiving one another [readily and freely], as God in Christ forgave you” (AMP).

4. Choose Not to Take the Criticism Personally

I often take things personally because I get caught up in focusing on myself. This is how one pastor put it: “Personal importance, or taking things personally, is the maximum expression of selfishness because we make the assumption that everything is about ‘me.’”

When I’m in a godly frame of mind, instead of thinking, It’s all about me, or It’s all my fault when James is criticizing me, my heart is overwhelmed with compassion. I think of how hurt he must be to overreact like he does. Instead of thinking, How could he treat me like that? I’m learning to pray, “Lord, please intervene in his life,” and “Empower me to treat him kindly.”

Some days it has seemed as though James hates all women, and I’m the female gender’s scapegoat for that hatred. This is because of unresolved issues in his relationships with his sister and his mother—both of whom suffered from severe mental illness. The root of James’s critical nature (and also mine) is shame.

I’ve noticed that he tries to speak more gently when he’s correcting me about something, and I thank him for that—rejoicing over his progress.

One definition of shame is “a painful feeling of humiliation or distress caused by the consciousness of wrong or foolish behavior.”

In her book Christian Men Who Hate Women, Dr. Margaret J. Rinck writes, “A shame state leads to lifestyle shame responses such as: hiding our weaknesses, blaming others, projecting our shame on others, defensiveness, becoming critical of self and others, perfectionism, works-orientation, fear of closeness, power/control tactics, judgmental behavior.”

James and I have both battled these shame responses in our lives. Realizing this gives me compassion for him, and I pray that instead of shaming each other through criticism, we will each take our shame to the Cross and leave it there.

6. Speak the Truth in Love

The day I realized that James’s problem with criticism had to do with insecurity as a man, I gently told him that. I’ve also encouraged him that if he could forgive his mom, he might be less critical of me. He has been able to see the truth in those two statements.

Instead of being passive and saying nothing, which in the past I’ve perceived as “forgiving” (but it wasn’t, since I just tucked the hurt away), I’ve learned to voice my feelings.

Since I’ve changed how I deal with criticism, James has noticed when he’s being critical and says, “I don’t know why I’m so irritable today,” and apologizes. I’ve noticed that he tries to speak more gently when he’s correcting me about something, and I thank him for that—rejoicing over his progress.

One of the things I loved about my husband when we first met is how much he encouraged me with his words, and what a gentle voice he had. He still does much of the time, but the Enemy wants me to forget about that and focus on my husband's criticisms, take them to heart, and nurse them into a giant, gaping wound.

Now I thank James when he is sweet to me with his words, and I tell him how much I need that.

As I look back over these six points, one word stands out: compassion. The way to deal with my husband’s criticisms of me is with the compassion of Christ. Be alive in me and in other women, Jesus, as we learn to humbly respond to criticism.

Emma Chambers is a pseudonym for a writer living in the Southeast. She and her husband will soon celebrate 39 years of marriage. Emma is working on a marriage book titled Or For Worse: Loving Your Husband Through Hard Times.