Helping your teenager deal with shame
By Sissy Goff 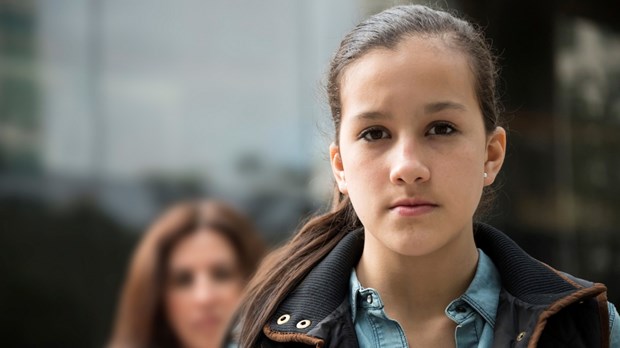 She was walking down a hill at camp next to her dad when he accidentally tripped and fell. And rather than the customary, compassionate “Are you okay?” this preteen yelled at her now-prone father. She wasn’t worried. She was embarrassed.

If you have a preteen or teenager, you know exactly the tone of voice with which she said it. It’s part anger, part discomfort, with a little shame mixed in. It may be that you walked outside in your bathrobe. Maybe you wore the “wrong jeans” to her soccer game. Or maybe you just said one word out loud in front of his friends, resulting in a loud, “Mooommm!”

Teenagers feel shame—a lot of it, actually. They often act like we (adults) are the source of that shame. Moms tend to be the biggest targets, and often for something that was totally acceptable before the teenage years—something as trivial as talking to them in public.

Believe it or not, shame is actually a very normal milestone in a child’s development. It coincides with a burgeoning self-awareness, which borders on what we would call narcissism. Somewhere in their preteen or teenage years, kids start to think about themselves and the ways that others see them . . . and they can’t seem to stop.

The renowned psychologist David Elkind coined the phrase “imaginary audience” to describe a phenomenon that takes place during adolescence. You probably remember it from your own teenage years. It is the very powerful belief that throngs of people are watching and critiquing your every move.

Believe it or not, shame is actually a very normal milestone in a child’s development.

It’s why you wanted your mom to drop you off a block from the movie theater instead of at the door. It’s why you thought that everyone noticed if your hair was out of place or if you said something “stupid.” And it’s why your parents seemed like they were out to humiliate you every time they were around your friends. It felt real to us as teenagers. And with the constant presence of social media today, the problem is only compounded. There is an actual audience “liking” or not liking your teenager’s every move, photo, and post.

The imaginary audience is simply one reflection of a teenager’s preoccupation with herself. What adults need to remember is that this preoccupation is an important—even necessary—milestone on the journey to growing up. Being a teenager is about individuating. It is the time when they become their own people and develop their own voices, which we desperately want them to do as they become adults. In doing so, those voices and opinions and selves often become larger than life in the process. It’s a little like a pendulum that has to swing out before it can come back to a balanced place.

The shame that they communicate to us is only a reflection of the shame teenagers often feel internally. I was recently with a group of sixth graders who were talking about the emotional changes they feel inside their hearts. One girl talked about becoming extremely angry with her mom for the first time. Her mom would probably tell you her daughter had been angry at her many times before, but now her daughter’s awareness had shifted. With this increased self-awareness, however, comes increased emotional shame.

She used to throw tantrums, feel repentant (sometimes), say she was sorry (sometimes), and move on. Now, she has outbursts and wonders what is wrong with her. She doesn’t understand the depth of sadness she feels inside. She wonders if anyone else has ever felt this insecure.

She doesn’t understand the depth of sadness she feels inside. She wonders if anyone else has ever felt this insecure.

In our book Mirrors and Maps, Melissa Trevathan and I liken it to Dorothy landing in Oz, where everything goes from black and white to color. Everything in the teenager’s world has changed and has much more depth and contrast . . . and she doesn’t understand or have the emotional maturity to navigate these changes. As a result, a teenager may often become angry and embarrassed about who she is. But, because you are the safest person in her life, that anger and embarrassment is directed toward you.

The good news is that the entry into Oz has powerful implications for your child spiritually. Because he is aware of his feelings at a whole new level, he also has the ability to understand his sin. He knows how angry he can get. He has a new awareness of how hurtful his words can be. He doesn’t like who he is, at times.

Many of us can trace the true beginning of our faith journeys back to middle school. It was largely due to the fact that we felt this combination of self-awareness and shame. We realized we messed up. We hurt other people. We got angry. We failed. We didn’t like ourselves at times. And so we realized how desperately we needed a Savior. Your kids can too.

How You Can Help

So, what do you do? How do you facilitate their spiritual growth and not let their embarrassment cast a pall over the fun of your family?

When my colleagues and I lead parenting seminars, we spend a great deal of time explaining development. We believe it is of the utmost importance that you understand where your children are developmentally as well as what they need to help them grow into and out of these important and tumultuous teenage years. Here are some tips:

Teenagers are hard at work in the process of “becoming.” They will make great strides and then fall flat on their faces. And, when they get up, they’ll often yell at you for leaving their shoes out to trip over. You are their safest person. You can still expect and require respect in your home, but know that they’re struggling even more with their teenage-dom than you are. They need grace—to know it from Jesus and to experience it from you is critical as you both discover more of who God has uniquely and wonderfully made them to be. stop

Sissy Goff, M.Ed., LPC-MHSP is an author, speaker, and the Director of Child and Adolescent Counseling at Daystar Counseling Ministries in Nashville, Tennessee. You can follow her at her blog RaisingBoysAndGirls.com.