We don’t get do-overs, but God can redeem our regrets
By Michelle Van Loon 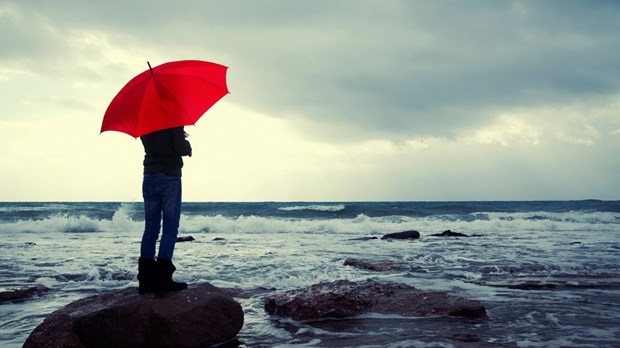 I'd once been lost. But somehow on the way to being found, I’d picked up the idea that my new life in Jesus had no space for my pre-Christian regrets. I perceived my lingering regrets as if they were a bad hangover from my sin, a byproduct of my troubled past. I’d been forgiven. Regret was an anchor to my past and had no place in my new life in Christ.

If I didn’t know what to do with the regrets I’d acquired before Christ, I was even more clueless about how to think about the regrets I accumulated after I’d come to faith in Jesus. Despite my best efforts to follow him faithfully, my faith was (and is!) full of growing pains and moments of clumsy regression. As a result, I’ve made choices that left a growing pile of regrets in my life. For example, my husband and I had made an impulsive and irreversible decision when I was just 27 that affected our ability to have more children. A lifelong friend was in a failing marriage, and I had dumped a load of unsolicited, rule-laden advice on her. (The “help” I gave to my friend was the equivalent of pouring undiluted bleach into her tender wounds—and it cost me a treasured relationship.) I’d gotten caught in the crossfire of some bitter church politics and felt compelled to pick a side. The cost was severed relationships with friends on the other side. My regret-filled brokenness glinted off of the jagged edges of these intractable, messy situations.

I inferred from the silence on the subject among other Christians that perhaps believers aren’t supposed to have any regrets.

I understood that if I freely confessed my sin, Jesus would forgive and purify me (). While I was grateful that I was no longer guilty in the eyes of my gracious Savior, I didn’t know what to do with the cache of regret left in the debris of consequences from my sinful choices as I walked—and stumbled—in the way of Jesus. I’d never heard believers talk about what to do with the “if onlys” we accumulate as Christians. I inferred from the silence on the subject among other Christians that perhaps believers aren’t supposed to have any regrets. Since I did have regrets, I wondered if they automatically qualified as sin too. I didn’t know what to do with my regrets, so I kept them to myself and hoped they’d fade away.

A lot of us are wrestling with unprocessed regret. A 2013 LifeWay Research study found that nearly half of those polled said they were currently dealing with the consequences of an earlier bad decision. Ed Stetzer, the President of Lifeway Research, noted that there is a golden opportunity for us in the church to care for those mired in regret: “Caring for those dealing with pain and regrets is not about fulfilling obligations or relieving guilt, as all of that has already been taken care of by Christ.” Instead, in order to provide this care to others and to ourselves, we must begin by learning to address issues of regret in an authentic, redemptive manner.

I think some of the confusion we may have about how we should respond to regret and guilt comes because we tangle the definitions of two closely-related concepts: regret and remorse. Regret is our awareness of the consequences of an event or action. We experience a sense of loss in the wake of a poor or painful choice we’ve made as we realize what has followed in the wake of that decision. For example, regret is thinking, I wish I wouldn’t have eaten that cold pizza out of the office refrigerator for breakfast because I felt like puking for the rest of the day.” Bible teacher Warren Wiersbe once summed up the essence of regret with a single question: “Why did I do that?”

Yet we sometimes misrepresent God’s great, true promises to one another by acting as though these promises mean we’ll experience an existence that is problem-free and consequence-lite.

Remorse, on the other hand, reflects our sense of moral guilt at our own real or perceived ethical failure. It speaks to our emotional distress about our choices and has to do with our sorrow over the choice itself, rather than the consequences. Remorse would mean thinking, I shouldn’t have stolen that cold pizza out of the office refrigerator and eaten it for breakfast because it didn’t belong to me.

Remorse and regret bleed into each other in the same way blue and violet merge on a rainbow. It is helpful to understand the distinctions, but it is also important to remember that the two work in tandem in our lives. We do something we regret, and we feel remorse about it. And if we respond to that remorse, it can lead us to repentance, which includes both confession and movement toward a new course of action.

By these definitions, remorse can be a catalyst for change. Regret, on the other hand, keeps us chained to a past we can’t alter no matter how many woulda, coulda, shouldas we lob at it.

We are people who cherish Jesus’ promise of abundant life () and the good news that we no longer live, as Eugene Peterson’s The Message paraphrases Romans 8:1, “under a continuous, low-lying black cloud.” Yet we sometimes misrepresent God’s great, true promises to one another by acting as though these promises mean we’ll experience an existence that is problem-free and consequence-lite.

When we only preach the ideal without being simultaneously real, we force all conversations about Christian regret into hiding. The reality is that rarely does discipleship follow a perfect, tidy script. The reality is also that regret can serve a redemptive, restorative purpose in our lives.

The disciples (who spent every single day in the company of Jesus) model for us a two-steps-forward, one-step-backward, triple-toe-loop sort of spiritual trajectory. We see them make all kinds of mistakes, squabble, and sin. All of them scattered to the four winds after Jesus’ arrest. Perhaps most poignantly, Scripture gives us an excruciating look at the way in which the impulsive, passionate Peter denied knowing Jesus three times within hours after Jesus washed his feet (). If there is a biblical moment that captures the searing pain of regret, it is in the sound of Peter’s gut-wrenching sobs after he realized he’d done to his beloved friend precisely what he’d insisted he was incapable of doing ().

Regret tries to spin us the fairy tale that goes something like this: our lives would flourish at last if only we could get a do-over.

Three days later, when the women came bursting into the room where the grieving disciples had reassembled after Jesus’ crucifixion with news of an empty tomb, it was Peter who ran to the tomb to see the scattered grave clothes for himself (). And in an amazing moment of grace, the resurrected Jesus three times asked Peter if Peter loved him (), not only restoring him to ministry but giving him a significantly greater measure of responsibility for the spiritual lives of others precisely because Peter’s regrets had brought him to the end of himself at long last.

It is significant that Jesus didn’t take Peter aside to have a one-on-one conversation with him. Instead, Peter’s regrets were on full display among the community of the other disciples who had made the same kind of cowardly choices as Peter had on the night Jesus was arrested. They couldn’t present to him or to one another a spit-shined version of themselves. Though I imagine Peter and the others may have had all kinds of apologies for Jesus, Scripture doesn’t record their requests for his forgiveness. What it does tell us is that he came to them where they were along the shore of the Sea of Galilee, mired in uncertainty born of their regret over their actions toward him. Jesus ate with them, loved them, and repurposed their regrets into matured, empowered faith.

Regret tries to spin us the fairy tale that goes something like this: our lives would flourish at last if only we could get a do-over. Or regret tells us the fable that we’re the only one with our particular version of “if only.” For too long in my life, I wrongly believed that all of my regrets—those I accumulated when I was lost and those I’d added to the stockpile after I’d been found—were best left unvoiced and unprocessed. Maybe I secretly hoped they’d disappear on their own. (They don’t.)

Jesus has an entirely different way of dealing with our regrets. Facing them with him loosens their hold on our present. Finding appropriate ways and settings to speak of the effects our regrets have had on us in our congregations, small groups, with friends, and with family, creates safe space for ourselves and others. That space looks a lot like a rocky shore along the Sea of Galilee, where the One who comes to redeem every awkward, painful regret we have is there, waiting for us.

Michelle Van Loon is the author of If Only: Letting Go of Regret, and is a regular contributor to CT’s Her.meneutics site for women and a blogger for Patheos.com. Follow her on Twitter at @michellevanloon.