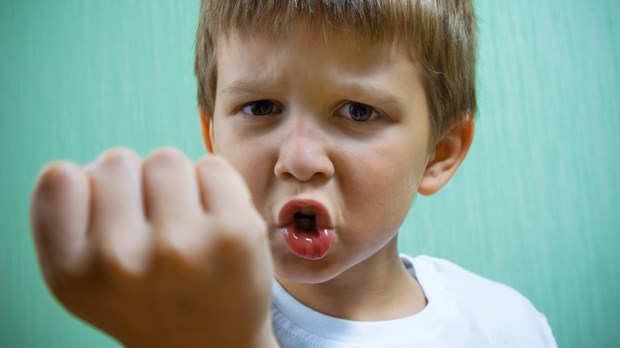 I learned how to be emotionally dishonest at an early age. When I was a child, any expression of anger earned me a one-way ticket to my room for a prolonged timeout. Afraid of breaking what appeared to be a fragile relational thread, I learned to either redirect or deny my anger. In essence, I learned that anger was simply not allowed.

This misguided response to anger continued well into my 40s. By that time, I had three young children and a husband who worked multiple part-time jobs. I was increasingly exhausted and angry, but I continued to deny the latter. At the same time, though, I became increasingly aware that anger was sometimes unavoidable.

Feeling safe and having self-control when angry are enormously important milestones that all children need to reach.

Though my own parents never modeled a healthy expression of anger, validated this emotion, or helped me navigate through it, as a parent myself I felt a deep need to approach anger more proactively. I wanted my kids to be able to understand and respond to feelings of anger in a healthy way. So together, my husband and I read books; we went to seminars; we grilled older, more experienced parents; and we learned.

Through this learning process, I began to see that because I’d denied the presence of anger in my own life for decades, it had morphed into barely recognizable manifestations within me, such as:

I realized that I had to face my own ambivalence about anger before I could help my children recognize and navigate through these powerful feelings.

Perhaps the most important thing we learned about anger and parenting is that anger is not simply a shameful loss of control. Anger manifests in children for various reasons, including:

The initial step in processing and navigating anger with my children involved training them to recognize it. Early on, recognition was often linked to particular behaviors or tone of voice. For example, we’d say, “Your anger seemed to go directly to your feet, causing them to kick over your brother’s block creation. Could you feel that happening before you kicked?” Or, “When you talk loud enough for the neighbors to hear you, can you stop for a minute and take a breath?”

Next, we aimed to help our kids find healthy options for expressing their angry feelings. Because the motivation to teach our children emerged out of our own dysfunction, my husband and I often felt like we were barely one step ahead of them. I distinctly remember hearing myself say, “I want you to use your words when you are angry,” and sensing the Holy Spirit remind me, That goes for you too, Mom!

While our eldest son had little trouble learning to articulate, “I’m really mad at you!” our second son struggled to find words to express his anger. One day we noticed him vigorously dancing to a certain song. The next time we recognized that he was angry, my husband played that song, and we eventually called it his “angry song,” coaching him to request it whenever he felt the need to dance away his anger. One family we know encourages their kids to head out to the trampoline when they need to work through their anger. I am quite certain that my successful high school and college athletic career was largely fueled by my subterranean deposits of anger.

Children as young as two years old intuitively understand the power that is inherent in anger.

Our children’s personalities are unique; what works for one may fail miserably for another. We needed to find a totally different approach for our youngest son, who often dissolved into tears when he was angry. His approach typically involved grabbing a book and snuggling in a quiet spot until he felt some measure of self-control and safety (or fell asleep).

Feeling safe and having self-control when angry are enormously important milestones that all children need to reach. Children as young as two years old intuitively understand the power that is inherent in anger. Their little bodies, in the midst of learning so many new skills, are seldom able to consistently contain and restrain themselves. As parents, we need to set firm boundaries that protected our children and others. Running inside our home or in the yard got a green light from us, but door slamming did not. Raising their voices was acceptable, but name calling and swearing (or saying “I hate you!”) was not. They were never allowed to use an object (such as a bat or golf club) to destroy a block tower or sand castle, but they could use their hands to “dismantle” it. Though the rules we established might seem whimsical or arbitrary, we actually spent a considerable amount of time thinking and praying about the many options. We aimed to find the balance between fostering self-control in our children while not shutting down their anger.

The final piece was regular forgiveness. Without fail, whenever the boys were struggling significantly with one another, there was some backlog of unprocessed offenses. To tease this out, we helped them to “hit rewind” and remember what had actually happened. Inevitably, there had been harsh words spoken, acts of hostility or selfishness, and so on, which gradually morphed into bitterness and resentment.

Early on, we had to script the process of forgiveness for them. “When you are ready, tell your brother you are sorry for stealing his candy.” Specificity matters in these instances. A mumbled, “Sorry!” with emotional dissonance simply won’t work. The offended child would then be prompted to offer forgiveness—again, being specific: “I forgive you for taking my candy.” Washing their slates clean always allowed them to have a greater measure of self-control, and more importantly, to enjoy one another more fully.

The emergence of angry feelings and the aggressive behavior that they sometimes lead to is hardly as eagerly awaited as a baby’s first word, or first steps. But like those two critically important events, angry feelings and figuring out what to do about them are important ways for him to assert himself and to make a place for himself in his world. . . . For the child, having a parent who accepts and understands his temperament is essential if he is to accept himself.

In the short-term, sending an angry child to her room is quick and easy (and yes, at times, this may be appropriate and effective). But our kids need more. In the long run, investing in the hard work of teaching your children how to recognize and constructively deal with their anger will prepare them to live healthy, emotionally rich lives.

Dorothy Littell Greco uses words and images to help folks find transformation through Jesus Christ and see the beauty in everyday life. She currently lives outside Boston with her husband and two of her three sons. You can follow her via Facebook or by visiting her site: www.DorothyGreco.com.