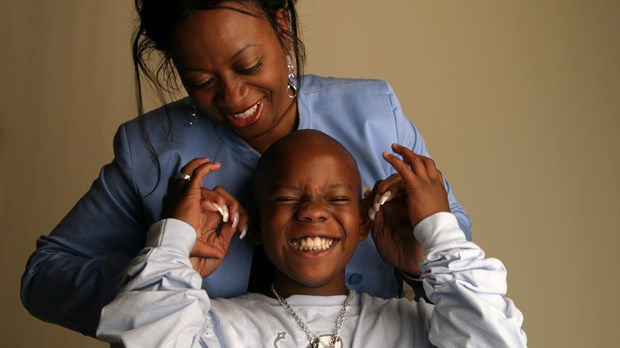 Uncomfortable is a common state of being for me. I had newlywed dreams of rearing happy, calm little kids. They would play with blocks, color pictures, and maybe jump on the bed now and then. But they wouldn’t do things that made me wince.

Then I had boys. Three of them. I don’t think I deserve a trophy for birthing three male children, but I do think those of us moms who have successfully held our tongues while watching our daring man-children dangle precariously from tree branches have at least earned a box of chocolates.

I have learned the art of silently screaming in my head, Stop that before you break every bone in your body, while verbally saying, “Wow, buddy, you are the bravest boy I know.”

I want my kids to be safe. I don’t like emergency room trips. Stitches, staples, casts . . . none of those things bring me joy. But they come with the territory, and I have come to grips with that. The longer I live in this crazy world whose goal seems to be to tame the wildness out of boys, the more I want to encourage the wildness to thrive in mine. (Even if the stress of it shaves a couple years off my life.)

Strong and Courageous Men of the Bible

The Bible is full of courageous men who battle for what is right—men who are called by God to be strong and courageous in the face of some scary enemies. Moses stood up to Pharaoh (Exodus 3–12). David fought Goliath (1 Samuel 17). Nehemiah and his men completed the wall with tools in one hand and weapons in the other (Nehemiah 4). And then of course, there is Joshua.

Sometimes I wonder what Joshua’s mom was like. She’s not mentioned in the Bible, but I know there was a woman who carried him for nine months, birthed him, and likely watched him play in the sand and catch desert snakes.

I am taking some creative license, but I have a feeling Joshua’s mom took parenting seriously. She knew for her boy to grow to be the man God created him to be she must be a supportive guide in that development—even if that meant allowing him some freedoms that made her uncomfortable.

My children may not lead such eventful adult lives as Joshua or those other men, but just the same, I want to use my role as mother to direct them down the road of the courageous and strong. I fear that beating down every semi-dangerous idea they come up with will send them in the wrong direction.

It is glaringly obvious to me that boys are created differently than girls, and I have made it a goal to understand what makes my boys tick. I’m not trying to gender stereotype. I certainly know some strong and courageous girls! But I fully believe God created boys with an innate desire for adventure and winning battles. In James Dobson’s book Bringing Up Boys he says: “[Boys] are men in training. Their aggressive nature is designed for a purpose. It prepares them for the ‘provision and protection’ roles to come. That assertiveness also builds character when properly channeled.”

Building character in my children is a great desire of mine—second only to seeing them choose to follow Christ with their lives.

There are a lot of ways we moms can build up our boys and develop their character. Many of them require us to let go of the reigns and encourage our boys in things that make us a little uncomfortable. The following are five I strive to implement.

1. I let my boys do things that make me nervous. I held my breath and tried hard not to shield my eyes the day they proudly performed stunts off a homemade bike ramp. And I held my tongue the day they tied a giant cooler to a skateboard and proceeded to connect the contraption to a bicycle so they could pull each other around.

Most recently our middle son taught himself (with the help of YouTube) to do backflips in the yard. The “you’re going to break your neck” montage repeating itself in my head came out verbally as: “That is awesome. I bet you are the only kid in town who can do a standing backflip in the grass.” In this case, if I had let my cautiousness win out over my desire for him to challenge himself, I would have missed out on seeing a pretty cool feat, and he would have missed out on the satisfaction of having a goal and working hard to achieve it.

2. I let my boys fight with weapons. Not real ones, mind you. They created swords and guns out of Legos and sticks long before we even owned any toy weapons. In their sweet little boy minds, they were protecting their mama from the bad guys. Now they are older and airsoft guns have become a hobby. I realize gun control is a controversial issue in our society, and not every mom will agree with my opinion on this one, but I am confident in my decision. I don’t want my children to be afraid of guns or think of the weapon as the source of evil. I want them to have a healthy understanding of the purpose of guns and to be able to handle one. Guns can be necessary and useful. Who knows, they may grow to be excellent hunters or maybe even become military leaders someday.

3. I read them stories about real-life courageous men. In addition to Bible characters who sometimes feel far removed from the reality of their lives, I’ve introduced them to people like Todd Beamer, Jim Elliot, and some of the men highlighted in Voice of the Martyrs. I want my sons to be exposed to modern, strong, and courageous men. And I want them to see that they, too, were created to be strong and courageous.

4. I expect injuries. If the activity they want to take part in bears no serious risk of maiming anyone, I let them try it. This has led to a broken arm, staples in the head, a few sprains, and a plethora of cuts and bruises. But it has also led to boys who are confident to try new things. Some of their wounds have been painful, but wounds heal, and they wear their scars as badges of honor.

5. I study them to identify their talents. I want to be aware of the ways God has gifted each of my sons and encourage them in those areas. My back-flipping son is quite the tumbler, and I am hoping to find a gym where he can practice this current passion. The same son is also creative, and we’ve been working together to learn to decorate cakes with fondant. My oldest loves math and is great with little kids, so I look for opportunities for him in those areas. I’m still trying to figure out my youngest, but I do hope to be supportive of his gifts and interests as well.

Sometimes I’m tempted to mold my kids into what I want them to be, but it’s when I get my mind off my desires that I can see their God-given talents and gently guide them. God is big, and his plans for my sons and yours may be bigger than you and I can imagine. I don’t want to be the mom who let fear win and held her son back from the strong and courageous life God had in mind for him.

And when I get to heaven, I fully intend to sit down with Joshua’s mom and swap stories.

Kim Harms is a freelance writer living in Huxley, Iowa, with her husband and three sons. In addition to writing, she operates 500 Dresses, a clothing ministry to Haitian children, and can be found online at KimHarms.net or or on Twitter at @kimharmsboymom.