From small and powerless to called and confident
Ashley Grace Emmert 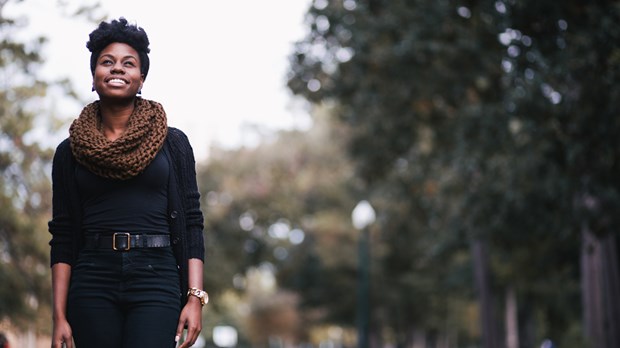 My queue is full of what Netflix categorizes as shows with a “Strong Female Lead.” While I don’t agree with every bit of content these shows air, I continue to watch them because I love seeing powerful women do what they do. It motivates me. Whether it’s Olivia Pope, Lorelai Gilmore, Meredith Grey, Leslie Knope, Cristina Yang, Jessica Day, Rayna James, or Mindy Lahiri, these women speak and act in powerful ways. They don’t timidly start sentences with “I might be wrong, but . . .” or “I mean, I think that . . .” And they don’t look for a man every time they need to make a decision. They are confident in who they are.

Yes, I know these are actresses playing roles from scripts. But still, I’m hungry to observe women like this. They challenge me to stop saying “Sorry” every time I begin a sentence, walk through a crowded area, voice an opinion, or just take up space. They help me process my desire to be more confident and decisive.

What Do Our Words Say?

In the real world, it’s more difficult to find women who speak and act in unapologetic, powerful ways. As a matter of fact, we’re actually often taught to do the opposite. In Soraya Chemaly’s Huffington Post article “10 Words Every Girl Should Learn,” she explains,

Globally, childhood politeness lessons are gender asymmetrical. We socialize girls to take turns, listen more carefully, not curse and resist interrupting in ways we do not expect boys to. Put another way, we generally teach girls subservient habits and boys to exercise dominance.

Chemaly’s article goes on to examine how our gender-based linguistic patterns greatly impact our culture. For example, men tend to interrupt women regularly when they’re speaking.

As adults, women's speech is granted less authority and credibility . . . . Indeed, in male-dominated problem solving groups including boards, committees and legislatures, men speak 75% more than women, with negative effects on decisions reached. That's why, as researchers summed up, "Having a seat at the table is not the same as having a voice."

In light of these expectations for female behavior and the consistent tendency for men to dominate and interrupt (“manterrupt”) conversations in group settings, women have started speaking up. Sheryl Sandberg has been a powerhouse in pointing out consistent gender-based discrimination in the workplace, and other women (and men) have followed in her footsteps to further explore the problem. With my television heroines blazing the way and Sandberg’s words guiding me, I am striving to be more assertive professionally, and even more so, I am making a great effort to stop apologizing for things like breathing and existing. (If you’re a chronic apologizer, you know what I mean.)

Professionally, this recognition of male dominant behavior has helped women across the country, myself included, by reminding us of two things: 1) This is actually a thing that happens—we’re not imagining it, and 2) It’s not okay.

In reading these articles, I feel simultaneously encouraged and angry. I’ve also been struck by the realization that this doesn’t just happen at work—it also happens at church. A lot. Consider: In your small group, in a leadership position, or in opinion sharing, what do your words sound like? How do you start your sentences?

Why is that? Why do we often feel small and powerless—rather than confident—in our communities of worship?

For me, it’s because time and time again, I’ve seen the female voice be challenged or ignored in ministry settings. For example, I know one woman who was recently told that her voice was too “high and feminine” for teaching in the church. Another female friend who is a strong leader has received consistent critiques, being seen as too bossy and harsh. Once I was called “brusque” when I took a small leadership position—and all I could think about were the men I’ve known who’ve consistently spoken more harshly and bluntly at church than I’d ever dream, and yet not a word was said to them about it.

When women take on leadership roles at church, we’re frequently expected to be kind, people-oriented, and polite first and to be leaders second. The problem is that this expectation creates a cycle in which our nice, restrained way of speaking and our “no, after you, I’m so sorry” behavior earns us very little respect.

I was recently convicted about this when I realized I had subconsciously looked down upon a female leader I was working with at church, assuming that I’d be able to call all the shots in the project. Why? Because this woman’s primary way of speaking was self-deprecation. It was only when she mentioned to me, weeks later, that our interaction had bothered her that I realized how my view of her had been wrongly shaped by the way she’d presented herself. I adored this woman, but I didn’t have an inherent confidence in her abilities because her language of “I’m sorry” and “I’m not sure, but, I could be wrong, er . . .” made me think otherwise.

And that self-deprecating language? I do it too. When my guy friends are having theological debates, I find myself apologizing directly after any time I chime in. “Sorry,” I hear myself say, “You guys probably already covered that. Or maybe I’m totally off on this. I have no idea . . .”

This kind of language feels necessary to me. It’s as if we think it’s important or expected that, as women, we begin sentences with an apology whenever we share a theological viewpoint or voice a directional idea for ministry. Why do we often feel that at church we still need to prove to those we’re addressing that we have any right to be speaking at all?

When I think about all of this, my first response is to feel angry. Angry that my voice isn’t as easy to hear. Angry that my opinions are sometimes looked down upon. And angry that I might be perceived as small and bossy.

At every church I’ve attended, it seems like I’ve had to claw my way onto a leadership team, but I truly can’t count the number of times I’ve been asked to help with children’s ministry. The message that’s been relayed to me over the past 20-something years is that children’s ministry is a good place for ladies and not worth most men’s time. This unfortunate stigma has removed the dignity from caring for children in ministry, which is one of the most important things we as living, breathing children of God can do.

Things need to change in order to match up with the true reality of who we are in Christ. The truth is that women are royal priests—not assistants to the royal priests. Because of Jesus’ work on the cross, we who have been “united with Christ in baptism have put on Christ, like putting on new clothes” (Galatians 3:27). We are all hidden in Christ, as we are equal heirs in the God’s kingdom. We can take great confidence from our calling and identity in Christ!

Consider the way Jesus confronted the social mores that shaped interactions between men and women in his time. Jesus taught women when it was against Jewish tradition for a Rabbi to teach them. He spoke to women despite their “womanly impurities.” He even spoke frankly to foreign women, a practice seen as ritually unclean. And he expected just as much out of that foreign woman at the well as he did out of his own disciples: to have faith.

I wonder, then, how can we, as women, embody this confidence in our words and demeanor? And how can churches begin leading the way in treating women with the same respect with which they naturally grant men? For thousands of years, the church has been doing God’s work in moving this world toward a better, holier way of thinking and doing. It’s time we find—and use—our voice.