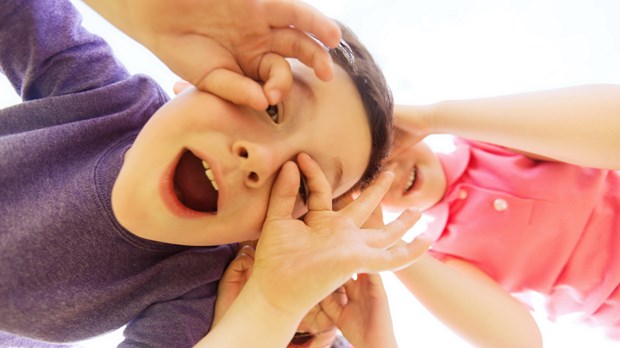 Eight-year-old Heidi ran into her house and burst into tears. Her mom, Elaine, threw her arms around her sobbing daughter and listened as Heidi described yet another day of taunting by classmates. "They call me Heidi Hippo and laugh at me," she sobbed. "They make me so mad!"

Heidi wasn't thin—but she wasn't overweight either. But with Heidi for a name and hippos in vogue among her age group, Heidi was fair game for a bunch of teasing children.

Unfortunately, teasing's a fact of life. But while some teasing's fairly innocent, other teasing torments. At its worst, teasing contributes to hurt, isolation, and even deadly retaliation.

When is teasing playful, and when does it turn destructive? How should you handle it if your child's the victim—or the teaser?

"Sticks and stones will break my bones, but words will never hurt me."

No statement's further from the truth; words do hurt, and they do heal. The apostle James has much to say about the tongue's power: "And so blessing and cursing come pouring out of the same mouth. Surely, my brothers and sisters, this is not right" (James 3:10).

That's why, when teasing's used as a putdown, it's wrong. One mother noticed her overweight 14-year-old daughter sitting on the family room couch, watching television. "Get off that couch before you leave a dent in it!" she laughingly remarked. But her comment wasn't funny to a young adolescent struggling with weight. Teasing that criticizes one's looks is especially painful, so teach your child she must never poke fun at someone about his or her body. It's off limits.

Young children often tell a sibling, "You stupid …." Don't permit this, either. A child who's allowed to verbally abuse his or her siblings or parents is more likely to become a mouthy teenager who blasts peers and disrespects adults.

When My Child's the Victim

Some sensitive children dissolve into tears at the slightest teasing. But it's not always in the best interest of your child for you to come to the rescue. Your child matures as he learns to handle things on his own.

At some point, every child will be the brunt of teasing. A wise parent won't make a bigger deal of it than it is. Instead, encourage your kid to laugh at herself or to ignore the barbs. Often a teaser quits when he doesn't provoke a reaction.

There will be times, however, when the teasing's more serious. What if your daughter's in tears again over the cruelty of another girl in her class? Take her feelings seriously; listen as she tells you what happened. Then—together—develop a strategy for the next time she has a similar encounter. If the problem continues, talk to her teacher to uncover what's really going on in class and work with the teacher to help both parties resolve the issue. If the teasing borders on dangerous threats, by all means contact the proper authorities. Persist until you receive help.

When My Child's the Teaser

Pray that if your kid's doing anything wrong—such as teasing—that he'll get caught!

During the elementary years we asked our children's teachers to let us know if they noticed our children being unkind or disrespectful in any way. Not only were we interested in their grades, but in their character.

One year, a fifth grade teacher called me to say, "Your twins are leading the fifth grade clique, teasing and leaving girls out. Several girls are in tears, and I thought you'd want to know."

I thanked the teacher for calling, then said we'd work on this at home, but that I'd check back with her in a week to see how things were going. Because Susy and Libby always had each other, they didn't emotionally comprehend what it felt like to be left out. So we had to enlist their three other siblings for some creative role-playing to put the girls in situations where they were left out. While it took time and work, finally Susy and Libby began to understand the pain of rejection. I'm so grateful their teacher called us!

Rachel's first grade soccer team was losing badly. The score was 19-1. The kids were humiliated and embarrassed, but it only got worse when the opposing team's members began chanting, "Your team sucks."

What an opportunity for the coach to pull both teams together and say, "Hey, we don't want this kind of talk. It's inappropriate and unkind. We're playing for fun. This kind of talk is poor sportsmanship. Anyone who speaks like this will be taken out of the game."

There are many ways to point out the pain teasing causes. Watch a sitcom with your kids. Mark down each time an actor puts down another with a teasing remark. Then note each time an actor builds someone else up. Imagine together how each comment made the recipient feel.

At age 15, my friend's son, Damon, had an "Ephesians pact" with some of the guys in his Bible study. Ephesians 4:29 says, "Do not let any unwholesome talk come out of your mouths, but only what is helpful for building others up according to their needs, that it may benefit those who listen."

Whenever one of the guys began saying something that tore down another person, another of Damon's buddies would simply say, "Ephesians." This reminder forced Damon or his friends to think about what they were saying, and to control their tongue.

Most of all, pray that your child will develop a sense of humor that doesn't depend on tearing others down for entertainment. Much of life is painful; we need to laugh whenever we can—but never at the expense of others.

Susan Alexander Yates is the author of And Then I Had Kids and And Then I Had Teenagers (both Revell). Susan and her husband, John, have five children.

by the author or Christianity Today/Today's Christian Woman magazine.