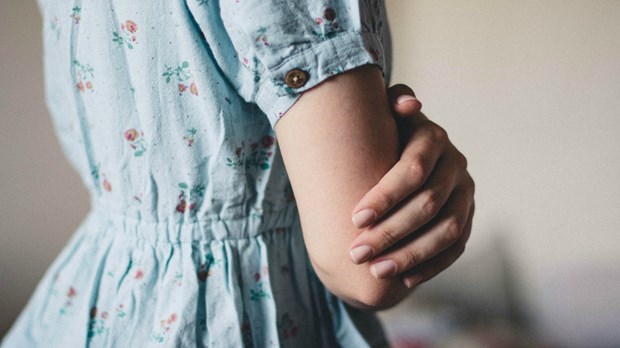 After our twins, Susy and Libby, finished their first semester at different colleges a few years ago, I asked them about the biggest challenge they'd faced as Christians on campus. To my surprise, it wasn't encountering the parties, casual sex, or agnostic professors. It was seeing the number of girls struggling with an eating disorder.

Could your daughter be dealing with this prevalent problem? Here's how to tell—and what measures to take.

Two types of eating disorders exist: anorexia nervosa and bulimia nervosa. Anorexia is characterized by a weight loss of at least 15 percent below normal body weight, and the loss of a menstrual period for 3 consecutive months. The sufferer has a tremendous fear of gaining weight and an obsessive preoccupation with food and exercise. Dry skin, brittle nails, and constipation may occur. Another symptom may be lanugo (fine, downy hair growing on the body or face). Hair may thin and fall out, and an anorexic may be sensitive to cold, deny hunger, and refuse to eat.

Bulimia is characterized by two or more episodes of binge eating every week for at least three months. Binges sometimes are followed by vomiting or purging (the use of laxatives or diuretics), and may alternate with compulsive exercise and fasting. While an anorexic's weight loss is noticed, a bulimic may not look thin. Her dental enamel may erode (a result of stomach acid), and she'll have a sore throat from vomiting. A girl may begin with anorexia and move to bulimia; they also can coexist.

Anorexia and bulimia can be life-threatening. Studies show the typical patient is an adolescent female (males suffer from eating disorders, but at a far smaller percentage) who's a high achiever. The girl usually has successful parents and feels compelled to succeed. She may be a perfectionist and exhibit obsessive-compulsive behavior over cleanliness and organization. She likely suffers from low self-esteem and may begin to withdraw socially.

Both diseases are psychological disorders that manifest themselves in eating habits. The common psychological component is the need to control.

No one knows exactly what causes these eating disorders. Certainly our culture plays a big part, for there's little evidence of the disease in non-Western countries. Genetics plays a role; the disease tends to run in families. Stress also contributes to susceptibility. My friend's daughter, Bea, lost a close friend in a severe accident right before she left for college. A series of other stressful events threw this bright Christian woman into the throes of anorexia. Fortunately, she has a close relationship with her parents and got the help she needed.

Lynn had been struggling for months with an eating disorder. Her weight was falling rapidly and her mood swings were increasing. Then her sorority sisters noticed food was disappearing from different rooms. When they confronted Lynn, she denied she had a problem, but after many sessions of tears and prayers with her concerned roommates, Lynn admitted she was starving herself and occasionally binging. As the situation deteriorated, the roommates phoned Lynn's parents to ask them to come to school and see their daughter. "Oh, you're overreacting! She looks fine to us," the parents responded. They denied the problem, and as a result, Lynn's still suffering from the disease and has withdrawn emotionally from her parents.

My friend Sally thought her daughter looked thin, so she began to monitor everything her daughter ate and quizzed her relentlessly about what she weighed. While Sally's daughter didn't have a problem, she was almost smothered by Sally's fears, which negatively impacted their relationship.

Cate's mom, on the other hand, noticed her athletic daughter was losing weight. Even though Cate didn't think she had a problem, her mom persisted and they found a doctor who diagnosed anorexia and referred them to a nutritionist and a counselor. Today Cate and her mom are closer than ever, and Cate shares her story on her campus to encourage others to seek help. While there's no one right way to respond to a possible eating disorder, be sure you don't deny it or overreact. And when there's strong evidence of a problem, get professional help.

Ten-year-old Betty was heavy. Her brothers began calling her "Tubs." They didn't mean any harm by it, but a few years later she developed an eating disorder. Don't allow any teasing about body shapes in your family, and work on the following:

Talk with your daughter about eating disorders. Let her know she can talk to you about anything without fear. If she struggles in this area, tell her you'll help her. One of the dangers of this disease is the secrecy that surrounds it.

If you struggle with an eating disorder, your child will be more susceptible. A mom who's always concerned about her looks and weight communicates false values to her child.

Be in your child's world.

Take time to build relationships with your child's friends. If you do, they'll be more likely to come to you if they have concerns about your child.

If you suspect there's a problem, set up a physical exam that includes a complete workup to rule out other physiological causes and test for electrolyte imbalance, thyroid conditions, and anemia. If an eating disorder is present, see a counselor for a psychological evaluation. Make sure the counselor is a Christian who has experience in eating disorders. Also visit a nutritionist who can help your daughter plan her diet and hold her accountable.

It does no good, for no one knows the exact cause of eating disorders. But God's in the midst of your pain, and he's promised he'll use all things—even eating disorders—for good for those who love him and who are called according to his purpose (Rom. 8:28). Ask God to make you alert to the good things he's teaching you through this difficult time.

Susan Alexander Yates is the author of several books, including What Really Matters at Home: Eight Crucial Elements for Building Character in the Family (Word).