From your child's friend in your house to the neighborhood kid on the playground, when—and how—should you step in?
Lauren F. Winner 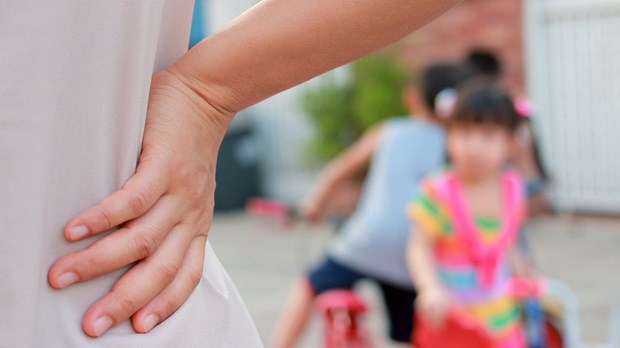 Downstairs in the church social hall last Sunday, I witnessed the following spectacle: Parents were drinking coffee and munching on doughnuts. Kids were running underfoot, some attached to mothers or fathers, some not. Suddenly there was a loud wail, followed by a young girl's insistent voice shouting, "I won't! And you can't make me." She stood in the corner in a pink frilly dress. "You're not my mother!" Happily, the mother in question dashed to the rescue, saving the rest of us from the awkwardness of trying to parent someone else's child.

It's a familiar scene and a familiar problem: disciplining other people's kids. Whether it's at church, at the playground, or in your own home, it's always a little tricky to know when and how to intervene when another child is acting up.

Your authority to discipline other people's children differs depending on where you are. In your own home, you're in charge, so you can expect other children to follow your rules and discipline them accordingly when they don't. But you have to be clear about what those rules are. A simple statement at the beginning of a play date—"At our home, we only throw balls outside"—is necessary because other parents may allow their children to play ball in the house.

With older kids, the issue of enforcing house rules often goes beyond where to play ball. One day, Shelia Carmichael came home to find her 17-year-old son and his friend Mike waiting for a pizza to be delivered. "That was fine," Shelia said. "I knew I would be late getting home, so I left a note and some money for pizza." What wasn't fine was Mike's choice of beverage: he was casually sipping a beer. "That may be fine at his house, but it's not fine in mine," said Shelia. "I managed not to lose it, and I didn't get moralistic. I simply told him that at our house we obey the laws of the land, including no beer for 17-year-olds. When I asked him to hand over the rest of his beer, he did."

You might feel uncomfortable playing the tough parent, but for the sake of your own children, you need to hold visiting children to the same standards of kindness, courtesy, and respect you have for them. It can be very confusing for your child to see a friend getting away with behaviors your child has been told are unacceptable.

Of course doling out discipline to someone else's child doesn't always go over well with the parent. When 7-year-old Rory came over to play with Josh, Josh's mom, Melissa, had to give Rory and Josh a time-out. "They were fighting and just would not stop," says Melissa. "I tried to turn their attention to another activity, and I gave them three warnings, but I finally gave them each a five-minute time-out." Melissa later received an angry phone call from Rory's mom, who felt Melissa had overstepped her bounds. Melissa says, "I told her calmly that when she left her child in my home, she was leaving him in my supervision, and if she wasn't comfortable with that, next time he comes to play, she could stay and supervise with me."

You can often defuse these kinds of conflicts ahead of time simply by talking with the other parent before the play date. "Honesty with playmates' parents is critical," says parenting expert Mary Manz Simon. For example, if you're taking your child and his friend to the park, you can simply say to the friend's mom or dad, "When I take Jane to the park, I tell her that she has to stay within my eyesight. I'm going to ask Sarah to do the same." If there is any disagreement over the rules, you and the other parent can clear it up before the situation arises.

Sometimes you have to make a hard call. If your child has a friend whose behavior is consistently egregious, or if that friend's parent is consistently unsettled by your attempts to discipline her child, you may need to put that friendship on hold.

While you can feel free to step in when visiting children are going against house rules, keep in mind that parents have different ideas about physical discipline: some parents spank, others don't. But even if you're a firm believer in spanking, refrain from using any kind of physical discipline on some else's child. Not only can parents who don't spank legitimately feel you've gone too far if you use this method on their kids, there can also be legal consequences.

When you see a child acting up in public, you have both fewer obligations and fewer rights to intervene. Feeling responsible for your own child's behavior is exhausting enough. Trying to assume responsibility for every child's behavior when you go to the park or the mall is enough to make a parent want to stay home alone!

Still, there are times when another child's misbehavior can make your own child's visit to the playground miserable. In public settings, low-key intervention that doesn't scream "discipline" can be best, especially if the other parent is present but not stepping in. If a child playing in the sandbox keeps throwing sand, you can simply sidle over and say gently, "Throwing sand isn't the best way to play in the sandbox. I bet we can find a better way to play." Then distract the child with another, more appropriate activity, such as building a sandcastle with him.

"When you're in public, think in terms of modeling positive behavior," says Simon. "That way, the intervening parent is not saying one child is right or wrong but is acting as a mediating influence."

Whether you choose to reprimand the bully in the sandbox is up to you, but all parents—indeed, non-parents too—have a responsibility to make sure kids aren't doing anything physically dangerous. If you see children putting themselves or others at physical risk, you must act. "The underlying thing is safety," says Simon. "What we've learned in this era is that pervasive tolerance for some kind of behaviors can become life and death issues when our kids are in a public forum."

When the kids you're trying to discipline are your nieces, nephews, or cousins, things can get especially tricky. "Usually, if I'm in a public place and some child is doing something outrageous, I deal with the situation, and usually other parents are grateful," says Linda Li. But when, at a family reunion, Li tried to silence a nephew who was interrupting a toast, her sister got very upset. Later Li and her sister talked about the incident. "It was clear that she was reacting to me because I was her sister. Sometimes, with family, you call up all sorts of other baggage."

But occasionally the reverse is true. "In my family," says Kimber Gold, "we really are one big family. I am able to discipline my sisters' kids just like they're my own. And she has the same latitude with my children."

The moral of the story: Every family is different. As you and your siblings become parents, it may be especially important to talk about the expectations for children's behavior and the consequences for misbehavior before a big family gathering.

When it comes to children in church, everyone has different expectations. While some believe that the sweet sounds of children add life to the body of Christ, others may view the pitter patter of not-so-little feet as a major distraction.

The pseudo-family atmosphere of church also complicates the discipline issue. Although you know many of the families in your church, regulating their children's behavior may feel uncomfortable. Ginger Davis was serving as the team worship leader one Sunday at her Episcopal church. "Children were darting in and out the entire time, and finally, during the prayers of the people, which last about five minutes, I asked the ushers not to let any children into the sanctuary. The kids could go out, but they couldn't return until the prayers were concluded," says Davis. She got an earful from annoyed parents afterward.

Davis and the other moms realized the church needed a policy about children's behavior during worship, and they set up a special committee to handle it. "It wasn't an easy or fun process," says Davis, "but we came to a shared understanding about when the children could roam unattended."

The issue of keeping someone else's child in line is one of those sticky parenting situations that no one enjoys. But by staying cool, making your expectations clear, and talking honestly with other parents, you can make even the most awkward situation a valuable experience for all involved.

Lauren F. Winner is an ordained Episcopal priest and the author of numerous books, including Wearing God, Girl Meets God, and Still. She teaches at Duke Divinity School in Durham, North Carolina. Her articles have appeared in the New York Times Book Review, The Washington Post, The Wall Street Journal, Books & Culture, and other periodicals. Visit her website at LaurenWinner.net.

Copyright © 2001 by the author and Christianity Today