Why divorce wasn't the answer to my emptiness
Judy Bodmer 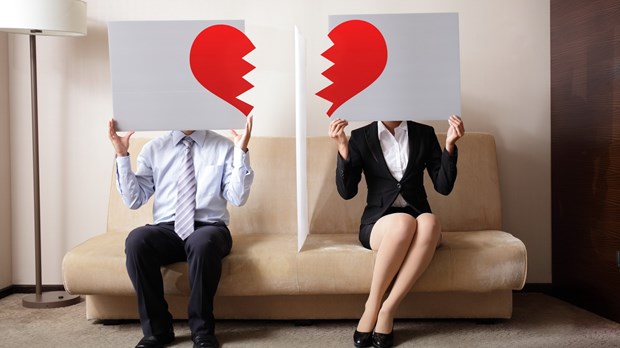 I lay in bed staring at the darkness. My husband, Larry, was snoring softly beside me. We'd just had another fight. I could hardly remember what had started it, but I knew we'd both said ugly, hateful things. Nothing had been resolved. We'd just gotten tired. Now he slept and I lay here, feeling utterly alone.

I crawled out of bed to check on our two sons. David, such a handful while awake, looked like an angel even though his face was sticky from the ice cream he'd eaten earlier. I pulled Matthew's covers back on his small body and smoothed his blond head. He needed a haircut. Working full-time, with two small sons to referee and a house to keep clean, I never had enough time to do it all.

Something drew me to the window. I could see the lights from downtown Seattle. So many people. What were they doing? Were they as lonely as I was? Was there anyone out there who cared? God, I cried, help me find the strength to leave.

After ten years of marriage, I wanted out. Our love hadn't died in the heat of this battle or any other battle. It had died at the bottom of a wall it couldn't climb.

I remember clearly the day I laid the first brick. We'd been married nine months. We went to a movie and I waited for Larry to reach over and take my hand, thus proving the magic was still there. But he didn't and, as the movie progressed, I grew hurt and angry. He shrugged it off, surprised I was upset over such a little thing. To him it was nothing; to me it was the first sign our love wasn't perfect.

As the years passed, I added more bricks. When we were first married, he called me every day from work. But slowly those phone calls grew further apart and finally stopped. When I brought it up, he started calling again, but it wasn't the same. When we watched TV in the evening, he'd fall asleep. When we went out for dinner, he couldn't think of anything to say. His days off were measured by how much he got done—chores, work, and the children took priority. I got the crumbs, and I was starving.

I felt guilty for feeling the way I did; he wasn't abusive, he didn't run around with other women, he didn't drink or do drugs. He came home every night and worked hard to support our family. Despite this, the wall grew, built with bricks of buried anger, unmet needs, silences, and cold shoulders. The marriage books we read made things worse; counseling confused the issues.

Divorce seemed like the only answer. It would give me a chance to start over and find the right person. Yes, it would be hard on the children, but when I was finally happy, I'd be a better parent. In the long run, it would be better for all of us.

Before taking that big step, I asked myself some key questions. First, would a divorce make me happier? Somewhere I read that people who divorce tend to remarry the same kind of person, that the root of unhappiness isn't in the people we marry but in ourselves. When I looked at my husband, I knew this was true. The trait in Larry that drew me to him—his calm exterior—also drove me crazy. He never complained, criticized, or caused a fuss. The downside was that when situations arose when he should get angry, he didn't. Once he was cheated in a business deal. I wanted him to confront the man who'd lied to him, but he wouldn't. His love of peace kept him from standing up for himself, making me think he was a moral marshmallow. But if I divorced Larry, I knew I'd marry someone with his same peaceful demeanor. And if I did, my problems would be multiplied by his kids, my kids, child support, and custody battles.

I took a long, hard look at the single mothers I knew. They were exhausted and lonely. There was no one to help soothe crying babies, entertain toddlers, shuttle kids to practices, or help with the house, yard, and car.

Could I afford a divorce financially? The average divorce, according to my paralegal friend, costs about $12,000. My salary was good, but when I looked at our household expenses, there would be hardly enough money to live on, let alone extra money to pay lawyers.

Would my children really be better off in the long run? I looked at the children of my friends who'd divorced. Many of these kids started getting into trouble: staying out all night, drinking, doing drugs, and running away. Most of them were angry and blamed themselves for their parents' split. They took it out on their mother. The father became the hero because he wasn't doing the disciplining. Instead, he brought presents, bought a hot car, and took them fun places the mother couldn't afford. Studies show that even 25 years after a split, children can still have significant emotional problems stemming from their parents' divorce.

What about my friends? I assumed they'd be there for me, but was I being realistic? Four of my friends divorced in one year—I didn't see any of them now. Two of them disappeared, one began leading a lifestyle I couldn't support, and another dated men I didn't care for. Even with the best of intentions, if I divorced, I'd probably lose many, if not all, of my friends.

God showed me I might escape my current pain, but in the long run, divorce extracted a high price. One I wasn't willing to pay.

But I refused to settle for the status quo. From experience, I knew I couldn't change my husband. There was only one person I could change: me. Jesus said, "You hypocrite, first take the plank our of your own eye, and then you will see clearly to remove the speck from your brother's eye" (Matthew 7:5). I got involved in a women's Bible study and started applying what I learned. Before I read a passage, I asked God to examine me. After many sessions on my face before him, honestly asking for forgiveness, I started to change. I became less critical and more forgiving. I stopped taking everything Larry said and did so personally.

I tried new things—taking a writing class, asking a new friend to lunch, volunteering at school. With Larry's blessing, I quit my job to stay home with our children, even though it meant cutting our income in half.

From 1 Corinthians 13, I discovered love isn't a feeling but an action. I decided to treat Larry with love, even though I didn't feel like it. Instead of pointing out his shortcomings, I told him the things he did right. Instead of reading books to see what Larry should be doing differently, I read to discover how I could be a better wife, mother, and friend.

My change in attitude had an amazing effect on Larry. He began spending more time with me. When I stopped overreacting to his comments, he felt freer to share more with me.

My decision to stay went against everything the world told me. Jesus promised, "I have come that [you] may have life and have it to the full" (John 10:10). I decided if God was my God, then I could trust this promise. I asked him to restore my love.

The love I thought had died didn't return in a week, a month, or even in a year. There were times I wanted to give up. But I clung to God's promise that he would give me the desire of my heart.

One weekend Larry and I went away. Before we left, we prayed and drew a line in the sand. Everything that had happened before was over; this was a new beginning. That weekend I experienced a new passion for my husband. The flame I thought was dead was rekindled.

Today when I sit in church worshiping God, I shudder at what I almost threw away. Larry and I laugh over things that used to drive me nuts, like his falling asleep in front of the TV. I can tell Larry anything, and he listens. Just yesterday he sent me a fax just to tell me he loves me.

At night when we lay curled up together, I reach over and touch him just to reassure myself he's still there. The love I have is strong. It's born out of suffering and obedience. The pain, tears, and struggles to get to this point were worth it for these rich rewards. There is hope for loveless marriages. Our relationship is living proof.

Judy Bodmer, author of When Love Dies: How to Save a Hopeless Marriage (Thomas Nelson), lives in Washington.