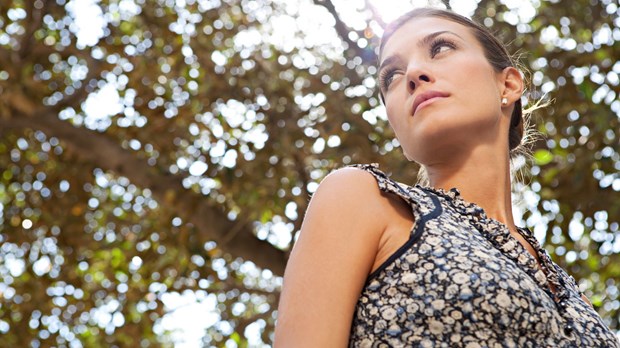 If someone says, “Don’t look . . .” while gazing over your shoulder, what’s your natural response?

To look, of course.

Nearly 4,000 years ago, a woman known only by her husband’s name ignored the same advice—“Don’t look back” (Genesis 19:17)—and turned from a pillar in the community into a pillar that became a signpost for future generations, showing what happens when human nature collides with divine instruction.

Two angels in the guise of men arrived in nefarious Sodom one evening, determined to lead Lot’s family to safety before wiping the ancient city off the planet, since “the people of this area were extremely wicked and constantly sinned against the Lord” (Genesis 13:13).

At dawn the angels urged Lot, “‘Hurry,’ they said to Lot. ‘Take your wife and your two daughters who are here. Get out right now, or you will be swept away in the destruction of the city!” (Genesis 19:15). The need for speed was clear, and so was impending disaster.

Alas, he who hesitates is Lot. Undaunted, the angels grabbed Lot and his family by the hands “and rushed them to safety outside the city, for the Lord was merciful” (Genesis 19:16).

I shake my head, befuddled by God’s boundless grace toward this mulish man and his silent but stubborn family.

What’s their problem, Lord? I fume. Why couldn’t they see you were trying to save them?

Ah. The same reason I didn’t recognize God’s offer of salvation until I was in my late 20s. Thank the Lord he’s patient, “not wanting anyone to perish, but everyone to come to repentance” (2 Peter 3:9, NIV). Including us, and all whom we cherish.

Back in Sodom, our foursome headed for the city gates, where they were told, “Flee for your lives!” (Genesis 19:17, NIV). Centuries later, the apostle Paul used the same word: “Flee from sexual immorality!” (1 Corinthians 6:18, NIV), “Flee from idolatry” (1 Corinthians 10:14, NIV), and “Flee the evil desires of youth” (2 Timothy 2:22, NIV). We get flee—though it’s certainly easier to say than obey.

Reluctant Lot and his family were told, “Don’t look back, and don’t stop anywhere in the plain!” (Genesis 19:17). Simple enough. When the Lord “rained down burning sulfur on Sodom and Gomorrah” (Genesis 19:24), the family was sheltered from the maelstrom.

We wonder, Why? Did she have a rebellious heart, chafing against the simplest of commands? A grieving heart, mourning lost family and friends? A foolish heart, longing for the material goods she left behind?

This we know: despite much whining and gnashing of teeth, Lot obeyed God; however quiet she might have been, Mrs. Lot defied God.

Since the Lord led me away from my destructive lifestyle over two dozen years ago, I’ve resisted the urge to look back. Daily I cling to Paul’s words: “Forgetting what is behind and straining toward what is ahead, I press on . . .” (Philippians 3:13–14). What’s behind is death, dear one; what’s ahead is life. Press on! stop

Liz Curtis Higgs is the author of several books, including Embrace Grace: Welcome to the Forgiven Life and Bad Girls of the Bible: And What We Can Learn from Them. Connect with her at LizCurtisHiggs.com or on Twitter at @LizCurtisHiggs.