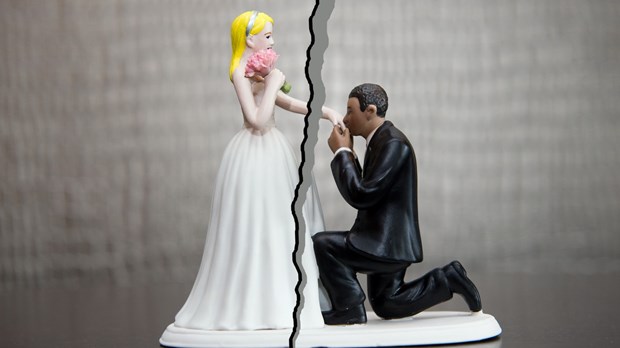 Half of all marriages end in divorce. We know this to be true because people tell us. The media report it. Your pastor might preach it. Your friends talk about it. As one expert puts it, the statistic has become "part of American folklore."

But it's a lie. Repeat after me: Fifty percent of all marriages do not end in divorce.

If it's untrue, why won't that flawed statistic go away? Because, truth be told, no one can come up with the right statistic.

Recent research suggests that one marriage in four is closer to the true divorce rate. The 50-percent myth originated a couple of decades ago when someone looked at marriage and divorce numbers reported by the National Center for Health Statistics. The number of divorces in one year was precisely half the number of marriages. Voila! Half of all marriages end in divorce. Right? Nope.

With this kind of math, we also could reason that everyone born this year also will die this year. After all, the number of births each year roughly equals the number of deaths. The flawed reasoning is obvious: A lot of people are alive who neither were born nor died this year. You very likely are one of them. Similarly, the divorce statisticians forgot to figure in the marriages already in existence, of which there are, oh, tens of millions.

"The media, frankly, tend to use a lot of information without ever challenging what they use," says researcher George Barna, author of The Future of the American Family (Moody). So the media can shoulder much of the blame for propagating an inaccurate statistic. But why don't more people challenge it?

"Many people have a vested interest in accepting it as fact," Barna says. "Preachers use it to awaken people in their churches as to how bad things are. Those who have been through a divorce may use it to rationalize what they personally have experienced. And, from a spiritual perspective, the lie is always more intriguing than the truth."

But is it a lie? Or just one of many ways to interpret the figures?

"In one sense it is true," says Scott Richert, assistant editor of The Family in America, a journal published by The Rockford Institute. "If you look at all marriages that took place last year, about 45 to 50 percent will eventually end in divorce." He draws that conclusion based on the fact that the annual ratio of divorces-to-marriages has been about one in two for more than a generation.

"There's been a slight downward trend in the past several years," Richert says, "but basically that number has been consistent since no-fault divorce began in 1970."

But remember, we're talking about two groups of people. Richert's statement doesn't necessarily contradict Barna's, because Richert is talking about new marriages and Barna is talking about all marriages. Among the 55-and-older population, for example, marriages are quite stable. Most marriages that fail do so before the partners reach their mid-40s.

"This is all complicated stuff," says William Mattox, senior researcher for the Family Research Council and a regular contributor to USA Today. "Some statistics are clean and neat and easier to understand, and some are not."

And according to Richert, "There's really no good, national figure. You'd have to go to every county in every state and check court records on marriages and divorces. No one has had the time or the funds to do a study like that."

Telling people that three out of every four marriages survive lifts some of the gloom and doom.

Barna's research may be the best recent attempt at finding the true divorce rate in America. His group surveyed 3,142 randomly selected adults and found that 24 percent of adults who have been married also have been divorced. The survey's margin of error is plus or minus 1 to 2 percent.

The wording here is important: "adults who have been married." Don't fall prey to well-meaning statisticians who go to the other extreme and say the divorce rate is less than 10 percent. Their answer is based on the Statistical Abstract of the United States, which shows the divorce rate as 4.7 people per thousand. That's per thousand adults in general—married, divorced, never married and widowed. So the figure doesn't tell you anything.

Closer to the mark, but still not all that helpful, is a National Center for Health Statistics figure showing 20.7 divorces per 1,000 married women. Again, that can be an apples-to-oranges comparison because the statistic includes all women who have ever been married—including those who are currently widowed or divorced.

"These figures aren't percentages," Richert cautions. "People get confused and say, 'Oh, this is a lot lower than 50 percent.'"

So we'll settle on roughly 25 percent. Still, that's nothing to brag about. And, as Richert indicated, the rate is rising as the older, more stable marriages die off. In the years ahead, a 50-percent divorce rate isn't unthinkable.

"If enough factors held constant for long enough, it probably would get close to 50 percent," Barna says, though he's not ready to concede that we're close to that yet. And neither is Mattox.

"Is there any truth to this statistic? Perhaps," he says. "But it's a very misleading statistic and very dangerous. It contributes to a mindset in our culture that divorce is inevitable. And it may have become a self-fulfilling prophecy."

The result, Mattox believes, is disrespect for the institution of marriage. Couples casually decide to try this marriage thing for a while, and if it doesn't work out, no problem. We only had a 50/50 chance going in, right?

"Someone who enters into the institution with that kind of regard for it is much more likely, when a crisis comes along, to think, 'time to bail,'" Mattox says.

Here's the really bad news: Barna finds that the divorce rate among born-again Christians (27 percent) and fundamentalist Christians (30 percent) actually is higher than the rate for non-Christians (23 percent). And yes, his survey asked if the people had been divorced before or after they became Christians. Eighty-seven percent said "after."

"A person's faith doesn't seem to have a lot of effect on whether they'll get divorced," Barna says. "Even among born-again Christians, most don't exhibit attitudes or behaviors any different than non-Christians."

Those numbers, once publicized, met with only mild surprise. "That's the milieu they live in," Barna says. "Either they've been through a divorce or they know someone who has. It's no longer the shocking reality that it was 30 or 40 years ago."

Again, these statistics should be explained. Barna's group asked belief-oriented questions to categorize people. Mattox says regular church attendance might be a better indicator of religion's effect on marital stability, since about 80 percent of Americans consider themselves Christians and about 40 percent say they're born again.

So, America, we have a problem. We also have some ammunition. Go out and challenge the one-in-two doomsayers with the truth. Tell your friends. Tell your pastor. But do it with compassion for the 24 percent, or whatever the actual number is, who have divorced. As Mattox points out, divorce still carries a certain amount of societal shame, especially for Christians.

And yet, telling people that three of every four marriages won't end in divorce sure lifts some of the gloom and doom.

"To me," Mattox says, "that puts things in a better perspective. It should offer people more hope."

Jim Killam is a freelance writer and journalism instructor at Northern Illinois University.