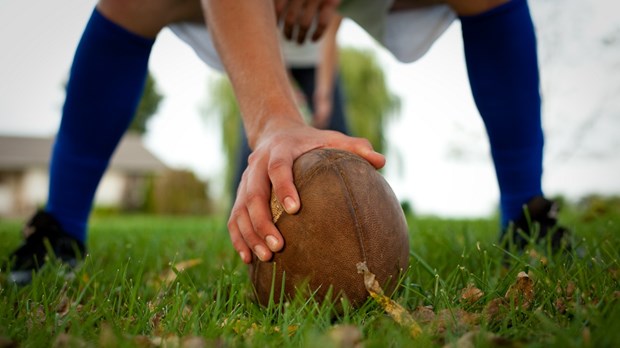 No, I'm not talking about "getting in touch with his feminine side." For the past several decades, society has been working hard to redefine men's roles and to emphasize the "sensitive" man who is supposed to enjoy cuddling and talk fests, and basically act like a girlfriend would. But is that really who you want your son to be? A girlfriend? Or do you want him to be a real man—one who is determined, honorable, and goal-oriented, but also loving and thoughtful toward the women in his life?

Frankly, I'm sick of getting in touch with my "feminine self." I like the masculine part just fine, thank you very much. I like channel surfing. I won't apologize for thinking that sex and football are two of the Almighty's and man's greatest inventions (respectively). I don't go to Tupperware parties. I won't eat quiche. I'm comfortable with my testosterone. I like eating with plastic forks—or no forks at all. I don't need a napkin to complete my meal. Yet anyone who knows me would tell you that this tough guy has a very tender heart toward all his children and his wife, and he is very thankful for all the strong women in his life who are more capable in certain areas than he is.

Are you comfortable with your son? Do you affirm his maleness? More than anything, your son needs for you to appreciate him as a boy and to encourage the masculine qualities you want him to have.

In today's world, some moms are more concerned with increasing a male's sensitivity toward the female population than with affirming male qualities. But such tactics don't really produce the results moms want. Instead, they create confusion—and confused sons tend to make terrible, traumatic choices.

Is it okay to do "girly" things? If a boy has an older sister, like I did, it's only natural for him to sometimes have pretend tea or play with dolls. But there's a huge difference between being comfortable with girls and always wanting to act like a girl. No woman wants a sissy for a son. She wants a tough, resilient man who will stand up for others with firm resolve and gentle compassion, and who will have a fierce, protective love and understanding heart for those close to him. Helping your son develop clearly defined gender roles will produce such a mature adult.

But it all starts with you, Mom. In all my years of counseling families and speaking to literally millions of people through radio, television, and seminars, one fact has impressed me as much as anything else: it's the child's relationship with the parent of the opposite sex that is most important in families. That means the mother-to-son relationship and the father-to-daughter relationship (for more on this one, see my book What a Difference a Daddy Makes).

Mothers leave an indelible imprint on the lives of their sons. Their sons may leave home, graduate from college, get married, and have children of their own, but they'll never stop being Mommy's boy. Although it might be natural to think that the man in your son's life—your husband, your ex-husband, the man who fathered your child, or your boyfriend—would have the most influence on him since they're both males, the opposite is true. You influence your son directly and have a much greater impact on the man he will become.

Mothers shape their sons in ways so profound that many men live with their moms' unwritten rules imprinted on them. That means your son's relationship with you, more than any other relationship, will affect the way he relates to all other females in his life, including bosses, co-workers, subordinates, sisters, wife, and daughters. How you treat him and think of him—and how he treats you and thinks of you—is the key to how he will treat all other females. That means you, Mom, have the edge in picking your own someday daughter-in-law.

He may be a lot tougher on your son than you are because he expects more out of him (especially if your son is a firstborn). And you may be a lot more tender. Sometimes the reverse is true, though it's not as likely since Mama Bear is always protective of her cubs. If you're a single parent and you're trying to be mom and dad, there's good news: you don't have to be both. (What a relief, huh?) Just be his mom, and you can heap blessings on him for a lifetime.

The more you understand about this unique mother-son relationship, the better you'll be able to help repair a damaged heart or strengthen an already healthy relationship both now and in the future.

What Your Boy Needs Most from You

No matter what age your boy is, there are three things he needs most from you.

He needs to be respected. Your son may be 13 and have recently dyed his hair blue, but he still needs to know that you respect who he is at his core, instead of merely looking at his exterior and thinking how he'll embarrass you in front of your friends. Keep in mind that your boy wants to please you. You're his mama, the most important person in his world … even if he is asking you to walk a couple steps behind him and his friends.

Your son needs you to believe he is a capable, worthy human being. He needs to know he is important in your world, and not just another thing to take care of or clean up after. He longs for acceptance, a sense of belonging, and companionship from you. No one else will do.

He needs to be needed. Again, your boy wants to please you. He just may not know how to do it. If you look too capable (at times the multitasking abilities of you moms can be incredibly intimidating to us men), he may not risk trying to help. Why not give him some ways to help? You'll do yourself a favor too.

"Fletcher, would you mind moving the couch for me? I'd love to vacuum under there tonight, but it's too heavy for me to move."

Your sometimes surly, hormone-laden 15-year-old will leap to help, flexing his muscles as he does. If you play your cards right, you might even get him to vacuum! Why? Because you've shown him that you need him. He's not just another piece of furniture but a needed member of the family.

Think of ways to include your son, no matter his age, as an active member of the family. Two-year-olds can do a great job putting away their own toys. "Sam, Mommy would love it if you would pick up your toys and put them in your toy box. Will you do that while I make macaroni and cheese for dinner?" Bet that toy box will be filled in record time. You may not be able to close the lid—after all, your son may not do things exactly the way you'd do them—but in the long run, does that really matter? Or is it more important that your son felt needed?

It's especially important that sons feel needed around the house, since males tend to live as islands. They have fewer friends than women do, so they have fewer relationships. If they don't learn to help and relate at home while they are growing up, who will teach them? Your daughter-in-law and grandchildren will someday thank you for your efforts. See how influential you are?

Your son needs to be needed not just by anyone. He needs to be needed by you. So let him be a boy. Let him be a conqueror, let him compete, let him problem-solve in his own way (even if you immediately see the answer). When you do so, you encourage your son to further his efforts and abilities to help not only himself but others as well. Your son needs to know he has a solid place in your world, in your home, and in your heart.

He needs to be fulfilled as a man. That includes knowing who he is—specifically as a male, what makes him unique, and how he should relate to women. No one can teach him more about what women want and how they deserve to be treated than you, a woman. If you have a husband who's a wonderful daddy, your son has a great start for male role models. Uncles and other close male family friends can also fulfill that role for a growing boy. But what your boy needs from you is your acceptance of his masculinity.

You often hear, "That's my boy!" from dads, but how often do you hear that statement from moms? Your boy needs to know that he belongs to you, that you think he's special just as he is, and that you appreciate his maleness—the ways he thinks differently from you, the times he uses his physical strength to shovel snow and mow grass, the way he looks out for his younger sister at school on the playground. Affirm his maleness, and you'll have a boy who will be eager to help around the house and will go the extra mile for you when needed.

Most of all, teach him how to see through your eyes what it's like to be a woman. Explain why whacking a girl on the head won't gain her interest or her respect, but smiling, engaging her in conversation, and offering her a Snickers bar will go a long way toward friendship. Teach him manners—how to use a napkin, to say "please" and "thank you," to answer the phone politely, and to start a conversation with a girl. Explain, age appropriately, how girls and boys are different in both thinking and needs, and how wonderful and exciting a relationship can be. After all, who better than you to explain how girls think and feel, since you happen to own the very same equipment as your son's future girlfriend?

Don't ever allow your son to treat you in any way that debases you as a female. If you do, you are setting up patterns in him that will negatively impact every female he has a relationship with, as well as the next generation (if he has children).

You don't need to put a skirt on your son or teach him to play with dolls in order to make him able to relate to his sisters and his someday girlfriend or wife. But you do need to explain clearly to your son what a woman wants from a man and what she needs to feel fulfilled.

Remember that the top three needs for a man are to be respected, to be needed, and to be fulfilled. The top three needs for a woman are quite different: affection, honest and open communication, and commitment to family. Through your own actions in your home and your interactions with your son, you can help your son learn inherently how to meet these three needs. And that's an indelible imprint that will last a lifetime and rocket him to success in all his relationships.