The Queen of Christian Pop opens up about divorce, prayer, inspiration, and the stories behind her first album in a decade
Allison J. Althoff 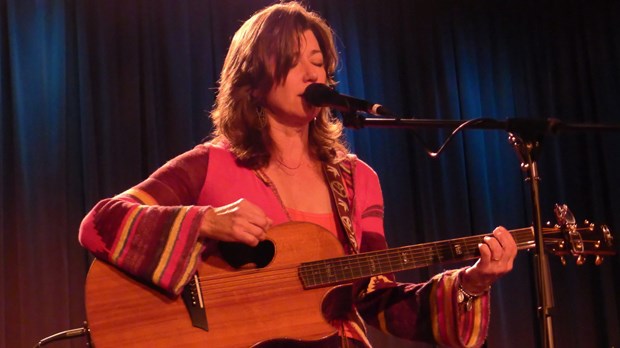 "It is okay if I do the first three minutes of this interview on speakerphone? I'm trying to do my hair because I woke up with an incredibly weird case of bed head. I usually don't do anything to it, but I have a really strange haircut right now because I cut it myself. It's so chewed and hacked up looking …"

Bed head is one of many challenges Amy Grant has faced over the past decade—but she's never been one to lie down and give up. Between sips of in-room coffee, the best-selling Christian artist of all time admitted she's made mistakes in her 35 years on the road. Still, as a recording artist, wife, mom, and friend, she insisted there's value in persevering in faith and asking God to sit with us in our imperfection.

"We always have a tendency to wonder, should I have done it differently?" Grant said. "You never stop asking questions like, 'I wonder if my adult child would've had this struggle had they not been through a divorce when they were six?' Every situation is different, and there are no pat answers. I've heard a broken bone heals stronger than one never broken, and that gives me so much hope."

After experiencing divorce from husband, Gary Chapman, in 1999, re-marriage to country artist Vince Gill in 2000, the birth of their daughter, Corrina, in 2001, the Nashville flood in 2010 that destroyed Gill's 35-year-old guitar collection, and losing her mother in 2011, Grant has learned the importance of prayer and petition firsthand.

"There's no point in praying if it doesn't come from an honest place," Grant said. "I have learned that, as shameful as it can be, it's important to at least speak what it is I see to be the truth out to God and to myself. We're all human, and our battle's not against flesh and blood—there's always a spiritual battle going on. Sometimes you have to just say, I'm not sure how I got where I am right now, but God, please just be here right now, and help me."

How mercy looks from here

Grant's new album, How Mercy Looks From Here, released Tuesday, and is dedicated to her mother. As her first studio album in a decade, Grant has experienced events that give her "plenty to write about."

"I wanted these songs to be a celebration of the journey of life," Grant said. "Some of the last words my mother said to me were to 'sing something that matters.' These songs have been so instrumental in helping me frame some really hard, life-changing events in a way that I can see the beautiful purpose that's brought meaning to things I thought were going to take me under."

As the first Christian artist to score a platinum album (Heart in Motion, 1991), Grant has found the value in producing music that integrates faith with everyday life. After receiving six Grammy Awards, selling over 30 million albums, and hitting #1 on the Billboard Hot 100 with 1991's "Baby Baby," Grant discovered a winning formula for sharing her faith with listeners in both mainstream and Christian markets.

"I've always loved music because it can facilitate somebody opening themselves up to change more than anything else. A lot of times that might mean engaging with a relationship with God, or Jesus, for the first time."

Grant saw the transformative work of the Spirit in action during the production of How Mercy Looks From Here in-studio with producer Marshall Altman, a Jew who lost his father during the recording process.

"We were recording a song on the album, 'What the Angels See,' with a line he wanted to change. I wanted to protect the line, 'This life is just a flinging door and spirits come and spirits go,' but we ultimately decided to change it to 'death's goodbye is love's hello,'" Grant said.

Grant considered that transference a divine appointment, as unbeknown to her, during the recording process, Altman's father was in hospice fighting for his life.

"The night his father passed, Marshall texted me: 'Death's goodbye is love's hello.' It's so interesting that this man who insisted on a different line I found out later had been singing to his father over those days in hospice."

Instances like these remind Grant why she started producing music in the first place: She's passionate about inspiring others to live out their faith in everyday life.

"I trust God uses the things we're passionate about for his glory," Grant said. "Just like a woman who says 'Oh! I found this great exercise program,' or, 'You have to use this new hair product,' or, 'I found the best doctor for my children,' when someone is living a life that is actively grounded in faith, the love of Jesus and the epic plan of God for all people, people wonder, What are you doing? What is it?"

In between radio interviews, shows, and spending time with her blended family outside Nashville, Tennessee, Grant does her best to pray without ceasing. With a schedule that includes 3 a.m. wake up calls, to sold-out shows at the Grand Ole Opry, to attendance at her daughter's middle school talent shows, Grant clings to Scripture memorization and songwriting to carry her through her daily routine. "In college I started specifically memorizing as many verses as I could by putting them to music," Grant said. "To have that accessible means it doesn't matter if you're riding a bike or sitting in traffic, it's the quickest access to entering into prayer, or just changing your thoughts."

Managing a blended family (children Matt, Millie, and Sarah with ex-husband Chapman, and one stepdaughter, Jenny, from Gill's first marriage, plus 12-year-old Corinna by Gill and Grant) and promoting a new feature album is no small task, but husband Gill insists Amy is the "glue of the whole family."

"I fall asleep at night praying for my kids," Grant said. "I just told Corrina the other day, at night when you've got your head on your pillow, if you could just say, God, I know you're crazy about me—thank you for loving me, it will change every day of your entire life. When we know we're loved, we behave differently."