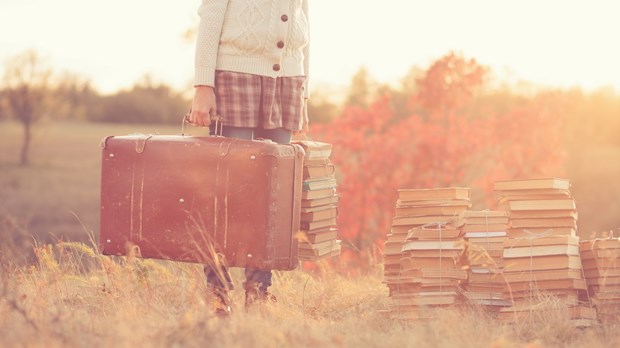 I started college as an international relations major. I had hoped this would serve as a foundation for pursuing a degree in international law with the ultimate goal of a career abroad combating human trafficking. I was beginning to expand the little sanitary, ordered, happy sphere where I had spent my childhood, and I felt an overwhelming need to restore the broken world that I saw. I longed to be a vessel for justice in the hopelessness of slavery.

After my first semester of courses on the international law track, it became clear to me that I was attempting something both outside of my skill set and my interests. As most first year students do, I fought a sense of total aimlessness by taking classes in virtually all disciplines. I was bound to find something I liked, right?

In the spring of that year, I enrolled in a literature class , solely to fulfill the general education requirement. I was drawn in by the stories, the classical tales that were carried along through generations, told around fires, memorized word for word until finally being recorded. I was fascinated at how a literary work could represent a culture, how deeply rooted in truth even fictional tales could be. The methods of relaying a message through words was seemingly infinite. I became enamored by language and its possibilities.

I want to believe that my contribution to kingdom work must be both visible and measurable, a tangible carrying of kingdom light and proven by the many holy fires for which I can claim responsibility for sparking.

I declared a major in English with a concentration in writing, and in the past few years, I have studied texts from myriad cultures and time periods. For me, this has largely been an exercise in empathy. It's often frustrating to read, say, 200 pages before really being able to discuss a work in depth, or perhaps to spend half an hour on a few lines of poetry before having any degree of understanding (thank you, T.S. Eliot). I am forced to spend a great deal of time pursuing understanding, putting myself in a posture of listening before I attempt to speak. This practice has proven extremely formative for me. It beckoned me to continually resist the temptation to propel through my life—unthinking, unexamining. I had been in the habit of an "infantilisation" of my mind. In a culture where it is easy to limit our attention to 140 characters, I was challenged to observe patiently, to probe past my initial reactions, and to continually put myself into the narrative of another for a few hundred pages or hundred paragraphs or hundred lines.

Language, I have concluded, is an empathetic discipline. Language redemptively gathers the sinews of the human experience and ties them into something that can be grasped onto by another. Language bridges the gaps from one person's synapses to another's in a web of understanding. This is gospel work.

The justice and redemption that initially drew me toward practicing international law is the same passion I find at work in the craft and study of literature. And yet, I'm constantly challenged to assign equal value to both professions. I want to believe that my contribution to kingdom work must be both visible and measurable, a tangible carrying of kingdom light and proven by the many holy fires for which I can claim responsibility for sparking. My own efforts in literature may never yield these sorts of results. Nonetheless, I cannot change the manner in which I have been gifted: I am unquestionably built for creative work.

What I learned in college is that I have a mind for the knotting together of things, for the color of life rather than its mechanics. When I accept that my mind was lovingly molded by my Creator to think in just this way, I begin to grasp what it means to be a member of the body.

The prophet Micah commands us as the body of Christ to do justice, love mercy, and walk humbly with our God, but this manifests differently in each of our lives according to our gifts (Micah 6:8). The beauty of the body is that a fingernail is only required to be a fingernail and to manifest that which is characteristic of a fingernail. Studying literature has shown me that I'm an arranger and examiner of language, and in doing this, I am being as much of a fingernail—tiny, simple, purposed—as I can be.

There I will remain, on the tip of a hand raised to heaven, offering up these meager gifts and praising God with the same voice as elbows and eyelashes and earlobes: "Holy, holy, holy is the Lord God Almighty; the whole earth is full of his glory" (Isaiah 6:3).