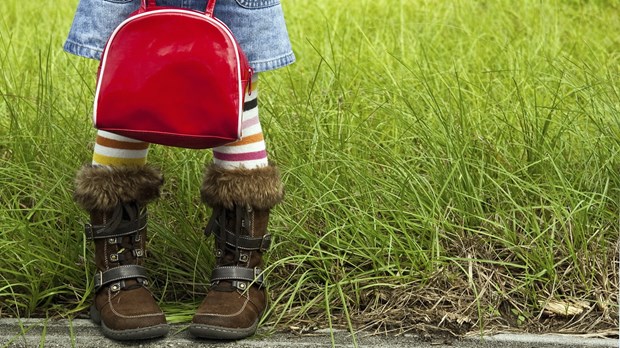 I learned early how comparison can wound a person.

I was 12 years old, sitting on a street curb with my friend on a July afternoon. It was so hot that the street's tar bubbled up around our flip-flopped feet.

I had called a curbside meeting because I needed her ear. I don't remember what had troubled me, but I do remember how I thought my heart might burst with sadness. Tears spilled down my face.

I wiped my cheek with the back of my hand and started to confide in her.

"Oh-OOOOH-ooh," she interrupted me. "Sounds like trouble in paradise."

I remember how she rolled her eyes, how her blonde ponytail whipped through the air when she shook her head—and how it felt like she took satisfaction in my momentary troubles.

My friend saw only the outside of my life, only the parts that looked like some version of paradise. The truth is, I did have a good life. I lived in a nice house, earned good grades, wore nice clothes, had dependable parents. Our family gathered around our dinner table almost every night, just after the six o'clock whistle blew from the top of the town's water tower.

My life wasn't perfect, but to my friend, it must have looked rather Beaver Cleaver-ish. My friend lived in a single-parent, low-income home. School was difficult for her, and her big brother was often getting into trouble.

When my friend held her life up next to mine, she saw a trash heap next to a gold mine. And I can't say for sure, but I walked away from the curb that day believing that, somewhere deep inside her, she felt a little bit better because I was hurting so badly.

Turns out, our little-girl penchant for comparison grows up with us.

Turns out, women can be 25 or 55 or 75 and still trying to figure out how they measure up to one another.

Turns out, women can be 25 or 55 or 75 and still trying to figure out how they measure up to one another.

Turns out, there are curbs everywhere.

The curbs are on Facebook and at the city park. There are curbs on Twitter and the blogosphere and in churches and school gymnasiums and the carpool lane.

It gets hot out there on the curb, where people's envy bubbles up like tar. We're comparing waist sizes, square footage, IQs, kids' report cards, approval ratings.

Comparison is a quiet vulture, swooping in to peck its sharp beak at our joy, our camaraderie, and our witness to the world.

We compare our trash-heaps days to someone's paradisiacal online updates. We might be tempted to roll our eyes at the precocious comments that some preschool mama quotes. Somewhere inside of us, we might be turning green with envy at another writer's bestselling book, a former colleague's success in a new business venture, another couple's second trip to the beach in a year. We might even quietly harbor a sense of satisfaction when the object of our envy stumbles.

Comparison is folly, and no one wins—or ever has.

We've been measuring ourselves against one another for approximately forever—sometimes with deadly consequences.

Cain compared himself to Abel, with a jealous anger that ended in his brother's murder. Joseph's brothers, moved by envy, sold him into slavery. Jesus' disciples bickered and compared themselves to one another on several occasions.

Paul pointed out the foolishness of it all:

But in all this comparing and grading and competing, they quite miss the point. (2 Corinthians 10:12, The Message)

Are we, as the verse says, missing the point?

Someone always gets hurt when we compare, even if we think it's a secret battle we're fighting on the inside. It hurts us, and it hurts the person sitting on the other side of our envy.

Someone always gets hurt when we compare, even if we think it's a secret battle we're fighting on the inside. It hurts us, and it hurts the person sitting on the other side of our envy. Comparison creates an us-versus-them mentality that can rob the body of Christ of its unity and fellowship. And it can open up doorways to petty criticism of the people we believe are "living in paradise."

Psychologists tell us that when we feel inadequate, we might try to protect our own self-worth by diminishing the work of those we envy. Cheap shots are delivered. Snickering ensues. We might get annoyed at the Facebook posts of the person who ran another ten miles, lost another ten pounds, or gained another ten followers. And when they're not looking, we might try to knock them down about ten notches.

My friend Carey told me the other day how a group of moms had made fun of her for being a "Pinterest mom."

"They talked about how bad Pinterest moms make them feel for not making cute valentines or throwing 'extreme' birthday parties," Carey said. "It was hurtful. I have never in my life gone overboard on my kids' birthday parties in order to make someone else feel bad. I do it because creating special things brings me joy."

When we compare our insides to someone else's outsides, we hurt them. And we hurt ourselves. I'm convinced that comparison is one of the biggest joy-robbers and dream-shredders in a Christian's life.

The Comparison Monster wedges its ugly self smack-dab between us and whatever God is calling us to do: start a blog, write a song, lead a Bible study, apply for a promotion. Nothing will kill a dream faster than looking at the life of someone who's already living your dream, then believing it's too good for you.

If you can't do it like her, why try?

Life is not a competition. We're actually all on the same team, and it's called the body of Christ.

Can't make a difference like your friend does? Throw in the towel.

When we compare, we forget the value of our own lives. We forget that we're the only "us" that the world will ever get.

For the sake of ourselves and our sisters, we have to stop this. Life is not a competition. We're actually all on the same team, and it's called the body of Christ.

The greatest antidote to comparison

One of the greatest antidotes to comparison is praise. We can praise God for what he has given us and—this one might be harder—praise God for the unique gifts he has given to our sisters. Instead of envying them, we can rejoice with them. Consider what would happen if we started celebrating other's victories instead of trampling on their parades. What if we started living out God's call on our lives, without worrying whether we'll measure up to some invisible standard? What if we picked up some pom-poms and cheered on our friends instead of picking up sticks or stones?

What if we ditched the lists?

Any of us can look back on our childhood lives and remember the lists that shaped us: honor rolls published in the local paper, school-play casting calls, homecoming courts, birthday-party invitations, and more. When we grow up, the lists grow up with us: the Fortune 500, the 50 Most Beautiful People in the World, the Top 100 Bloggers, the richest, the sexiest, the most relevant. Even Christian leaders have come up with online lists to tell us which authors are the most influential.

Rejoice, because your names are written in heaven. (Luke 10:20, KJV)

We can link hands and elbows as we sit on the curb of life. We can brush away each other's tears, squeeze each other's hands, and cheer wildly when it goes well for our sisters. I have plenty of friends who have attained a great amount of earthly success, while remaining humble and true to their callings. I have pledged to them that I won't compare their beautiful lives to mine, and I'll never cut them down when they're not looking.

We can sit at the curb together and say this pledge to each other: "I promise that I'll be for you." And we can curb our comparing, at the feet of our incomparable Savior.

Jennifer Dukes Lee is an award-winning news journalist and author of Love Idol: Letting Go of Your Need for Approval—and Seeing Yourself Through God's Eyes. She blogs at www.JenniferDukesLee.com. She invites you to connect with her on Twitter @dukeslee and on Facebook.