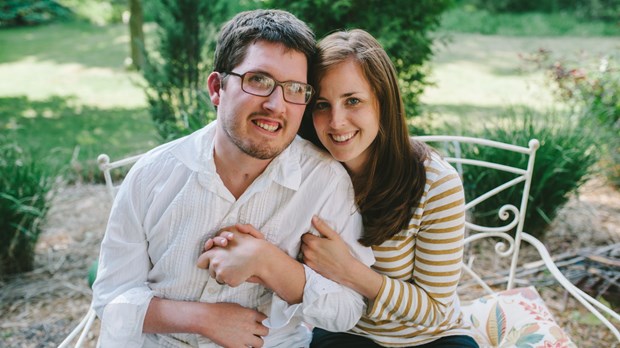 Ian and Larissa Murphy met in college in 2005. Ten months later, dreaming of the future they would share together when they married after graduation, Ian suffered serious brain trauma in a car accident. In the days and months that followed, Larissa helped Ian’s family care for him.

Several years later, when Ian—still dependent on others for daily physical care—proposed, Larissa said yes. Surrounded by family and friends, they were married on August 28, 2011.

The winsome video of Ian and Larissa’s relationship and marriage quickly went viral, and the newest version—with a 2014 update announcing the publication of their new book, Eight Twenty Eight—has garnered millions more views. By virtue of this video, complete strangers (like me) are privy to peek in and catch glimpses of a marriage that three years ago seemed both optimistic and precarious.

As we marvel at Larissa’s Christ-like care for Ian from the safety of our laptops or smart phones, we—married and single alike—have wondered, “Could I do that? Could I sacrifice my own dreams and desires to love like that? To love the way Christ loved the church?” Where, we may muse, has this young woman gathered the strength to commit herself in such a profound way? We’re captivated by the commitment of the lovely Larissa.

But marriage, of course, is a partnership. It’s about two people, so I also wanted to know what post-accident life and marriage have been like for Ian.

Ian’s posture, sounds, and movements reveal something of what he faces each day. Ian shares about his brain injury, “It affects my whole life. It’s slower and my body responds to my brain more slowly.” Of his physical challenges he adds, “My body is slower to respond, which means standing is harder, learning to walk is harder. My right arm is not responsive, and my right leg does not bend.”

Those intellectual and physical limitations are what folks at the grocery store or mall tend to notice when they see Ian and Larissa together. “People talk slowly and with annunciation and louder,” says Ian. “It’s annoying. Sometimes people stare at me.”

Ian also reveals what it is that strangers can’t see at first glance. “I am a normal individual,” he says, “I have hopes and fears, just like anybody else. One of my greatest hopes is to be a dad because my dad was awesome and showed me how to be a great dad.”

And there it is, the question most of us will never need to face: is marriage—is parenthood—only about intellectual and physical abilities? Or does a successful family depend on something, spiritually or emotionally, that is entirely different? Ian and Larissa’s marriage offers evidence that it might.

During their engagement, as part of their premarital counseling, Larissa and Ian studied John Piper’s This Momentary Marriage, which distinguishes what Piper calls the primary things about marriage and the secondary things. Larissa notes, “When we’re walking out our marriage, practically, Ian can’t do the secondary things, like working or making a meal for me.” 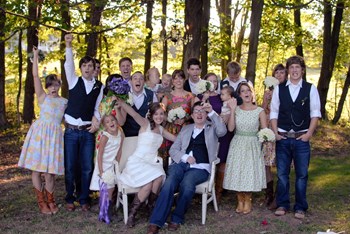 Ian and Larissa at their wedding

Like few starry-eyed brides and grooms, Ian and Larissa entered into marriage with more realism than most. In fact, during their late-summer wedding ceremony three years ago, the commitment to fidelity “in sickness and in health” was not part of the otherwise traditional vows the couple exchanged. I simply assumed they’d skimmed over it because it was so obviously a given. But in their new book Larissa discloses the honest reason: “That was the line that made me cry at every other wedding. It made me cry because I didn’t know what the second part meant . . . but I did know sickness.” Both bride and groom entered into marriage keenly aware of the secondary things their marriage would lack.

But Larissa continues on to explain, of Ian’s care for her, “Everything that’s primary, though, he can do, which is leading me spiritually. Ian always comes back to the foundational truths of who God is.” What Larissa sees in her husband is a man who draws her closer to the reality of God’s presence in their lives together. That spiritual bedrock, a shared trust in Christ’s goodness and the Father’s provision, is the foundation of the Murphy’s marriage.

During their beautiful outdoor wedding ceremony, Ian and Larissa asked her father to read the words of John Piper, which had meant so much to each of them:

Marriage is not, mainly, about prospering economically. It is mainly about displaying the covenant-keeping love between Christ and his church. Knowing Christ is more important than making a living. Treasuring Christ is more important than bearing children. Either way, it is short . . . . But if we set our face to make of marriage mainly what God designed it to be, no sorrows and no calamities can stand in our way. Every one of them will be not an obstacle to success, but a way to succeed. The beauty of the covenant-keeping love between Christ and his church shines brightest when nothing but Christ can sustain it.

By this measure, Ian and Larissa’s marriage shines brighter than most.

One of the sweet and honest bits Larissa shares in Eight Twenty Eight is that before Ian’s accident, his mouth could run off without much of a filter. Ian and his family would all agree! Now that he has to work harder for the words he shares, he reserves some of the unnecessary wisecracks and chooses the ones that count.

And it can be tempting for those who knew and loved Ian before the accident to separate him in their minds into pre- and post-accident Ian. But he is quick to remind his bride, “There is just one Ian.” Though in some ways, the Ian to whom Larissa is married today does seem like a streamlined version of the same man. Today’s Ian is a vessel full of love for God and love for his wife.

I was curious how Ian expresses that love to his wife every day.

And when asked what those people at the mall or the grocery store might have trouble recognizing about their relationship, Ian offers, “Our love. It’s happy, and it’s normal. Larissa has a good attitude and a husband that loves her.”

Ian knows that marriage is momentary and that our existence on this earth is also fleeting. What Ian would like to share with another couple who might find themselves in a similar situation is hope: “Keep on keeping on because the best is yet to come. On earth, as well as in heaven.”

Those are no rote words. Ian truly looks forward to the bounty awaiting him and his loved ones in heaven. On their third Valentine’s Day together, Larissa asked Ian to imagine what heaven will feel like when they would be released into complete and perfect joy.

Ian answered, “I can’t wait to share that with you.”

Touched by the depth of his hope and longing, Larissa mused, “This is deeper love than I offer him in return.” 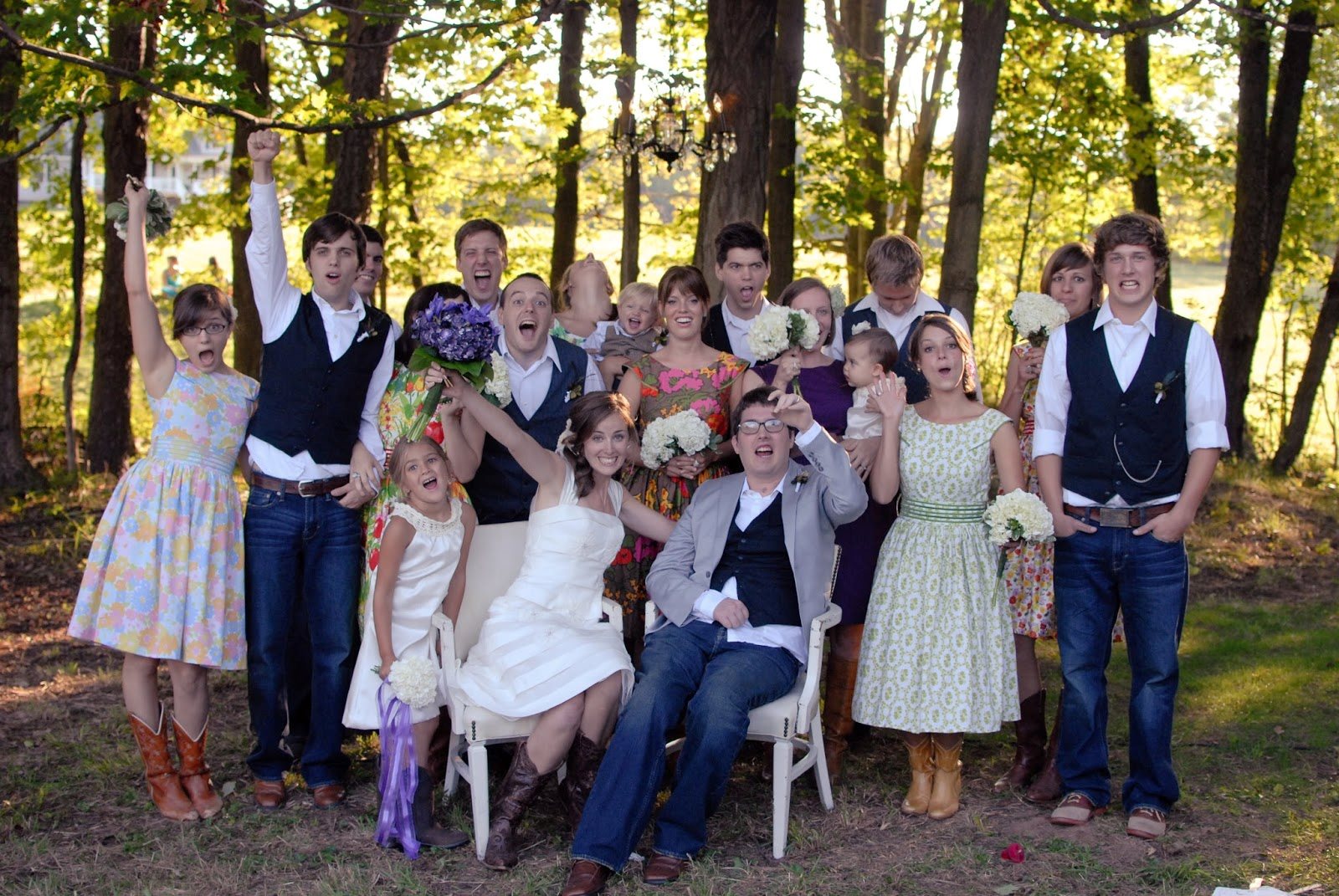