For years I ran toward drugs and gay relationships while my mother persisted in prayer and trusted in God's faithfulness.
Christopher Yuan 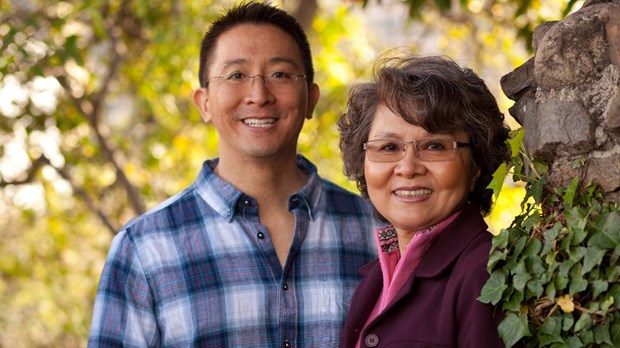 My mom was born in China and didn't know the Lord. She came to America for graduate school, but instead married my father against her parents' wishes. Because of her strained relationship with her parents, she longed to create a new family with my father where she could belong and be loved. With hard work and persistence, my mother helped my father receive two doctoral degrees and establish a successful dental practice.

On the outside, they were living the "American Dream." They seemed to have it all: a new dream home in the suburbs of Chicago, two luxury cars, and two sons in dental school. According to the ways of the world, my mother should have been happy. But she was completely miserable. I knew this because even when I was a child and my parents argued—which was often—I was the shoulder on which my mother would cry. They had already begun the paperwork for a divorce when I decided to make a public declaration.

On May 17, 1993, I came home after my first year at the University of Louisville School of Dentistry and announced to my parents: "I am gay." This devastated my mom. News of my death would have been easier for her to take than this. She thought an ultimatum would bring me to my senses, and demanded that I choose either the family or "that" (she could not even say the word gay). In my mind, there was no choice. I could not change. It felt like I had been disowned, but to my mother, I had betrayed her. Without a church family, she had no one to turn to, so she started looking through the phone book and listening to the radio in the hopes of finding help. When she was at the end of her rope, she resolved to do the unthinkable—she was going to end her life.

After seeing a minister who gave her a pamphlet on homosexuality, my mom bought a one-way Amtrak ticket to Louisville and planned to say goodbye to me before ending her life. With only her purse and that pamphlet, she embarked on a journey that changed her life forever. As she began to read the pamphlet on the train, she was immediately captivated. It explained the plan of salvation— that all of us are sinners, yet God still loves us in spite of our sin. The eyes of her heart were opened as she realized that just as God loves her, she could still love me . . . in spite of my living as a gay man. Before, she could not find it in herself to love her gay son. But now she realized she could do nothing other than love me as Christ had first loved her. My mother, who had not been searching for God, had been found by her loving Creator.

The eyes of her heart were opened as she realized that just as God loves her, she could still love me…in spite of my living as a gay man.

As she gazed out the window reflecting on God's love, my mother heard a still, small voice: You belong to me. Those four words from God were healing balm to her shattered heart. In Louisville, God didn't allow her to take her life; instead, he gave her a new life. A Christian lady in Louisville discipled her for six weeks, at which point my mom realized that it was time to restore her marriage, so she returned home. My father was so impressed with the changes in my mom that within a few months, he decided to join her on her journey with Jesus. But as God began miraculously to heal their relationship, I headed further and further into a world of sinful indulgence.

During dental school, I went through relationship after relationship searching for happiness, but I found myself lonelier than I was when I had started. So I began experimenting with drugs, and eventually sold drugs to pay for my habit. I tried to live a double life of school and parties, but it didn't work. Four months before I would have received my doctorate, I was expelled from dental school. To cope with this crushing blow, I pursued the euphoria of decadence as I moved to Atlanta and became a major drug supplier in the Southeast.

My mom tried to reach out to me with love and compassion during those years, but I wanted no part of it. At least once a week, she sent me a card signed, "Love you forever, Mom." But I threw them in the trash without even reading them. When she tried to call, I would ignore the phone or provoke an argument and then hang up on her. Once I told my mom, "If you ever tell me about Jesus or bring up the Bible, you will never see me again."

My parents frequently bought me plane tickets home for Thanksgiving and Christmas, hoping I would come visit. One Christmas Eve, my mother stood at the gate peering down the jet bridge in anticipation for her son arriving to spend the holiday at home. But as the last passengers exited the plane, she realized I was not on the flight. So she drove home, then returned several hours later to check the next flight—with great expectation. As the pilot and crew exited the plane after the last passengers, she knew I was not coming home for Christmas that year. It was more than obvious I was totally unreachable and completely hopeless. But through Christ, she committed not to focus on the hopelessness, but instead upon the promises of God.

My mother began to pray a bold prayer: Lord, do whatever it takes to bring this prodigal son to you. For seven years, she fasted every Monday, and once fasted 39 days for me. As my situation became more and more bleak, she immersed herself deeper into God's Word. My mother spent hours each morning in her prayer closet reading her Bible and interceding for others. In addition, she stepped out of her comfort zone and began to minister to other women as a Bible Study Fellowship discussion group leader. Her obedience and transparency in service was essential for her own healing.

Like the persistent widow, my mother kept bombarding heaven with her desperate pleas. She knew it would take nothing short of a miracle to bring this prodigal son to the Father. The answer came one day with a knock on my door. It was 12 Drug Enforcement Administration agents, Atlanta police, and 2 German shepherd dogs. They confiscated a shipment equivalent to the street value of 9.1 tons of marijuana. Sitting in jail, I quickly realized who my true friends were when no one accepted my collect calls. As a last resort, I dialed home, dreading the response on the other side as I imagined the earful that I was going to get. But my mother's first words were, "Son, are you okay?"

As difficult as it was, my mother knew without a doubt that this was God's answer to her prayers. She tore a small piece of adding machine tape and wrote down these first blessings: "Christopher is in a safe place compared to before, and he called home for the first time." The next day my mother flew to Atlanta to visit me in jail, and before she left, we pressed our hands up against the glass that separated us, and she prayed over me. As the days, weeks, and months passed, other difficult news came, including a six-year sentence and the fact that I was HIV positive. But my mother stood firm and continued to count the blessings in the midst of difficulties. Her list of blessings, which she started the first day of my incarceration, is now longer and taller than she is.

More powerful than the miracle of my transformation is my mother: a faithful woman of the Word, a mighty prayer warrior, and a beautiful monument of his grace.

The Lord continued to work in my life while I was in prison. I was released in July 2001, and I started a degree at Moody Bible Institute the next month. I graduated from Moody in 2005, went on to receive my master's degree in biblical exegesis from Wheaton College in 2007, and will receive my doctorate of ministry from Bethel Seminary (St. Paul, Minnesota) this May. I had the honor of co-authoring a memoir with my mother titled Out of a Far Country: A Gay Son's Journey to God, A Broken Mother's Search for Hope, in 2011, which is currently being translated into Chinese and German. God has blessed my parents and me with a global, cross-generational ministry proclaiming God's grace and truth on GLBTQ issues, while I also teach part-time at Moody in the Bible department.

Though my story is dramatic, a powerful message of encouragement lies in my mother's testimony of persistence. She did not focus upon my circumstances, but clung to God's Word when all things were hopeless. As Oswald Chambers said, "We are not here to prove that God answers prayer; we are here to be living monuments of His grace." More powerful than the miracle of my transformation is my mother: a faithful woman of the Word, a mighty prayer warrior, and a beautiful monument of his grace.

Editor's Note: Today, Christopher does not identify as gay, ex-gay or straight. Rather, he places his sole identity in Jesus Christ. To continue the conversation on "holy sexuality" with Christopher, read chapter 30 of his book, Out of a Far Country: A Gay Son's Journey to God, A Broken Mother's Search for Hope.

Christopher Yuan is co-author of Out of a Far Country: A Gay Son's Journey to God, A Broken Mother's Search for Hope, with his mother, Angela, and is also a sought-after speaker and doctoral candidate at Bethel Seminary. Connect with him on Facebook, Twitter, and on his website, www.ChristopherYuan.com.