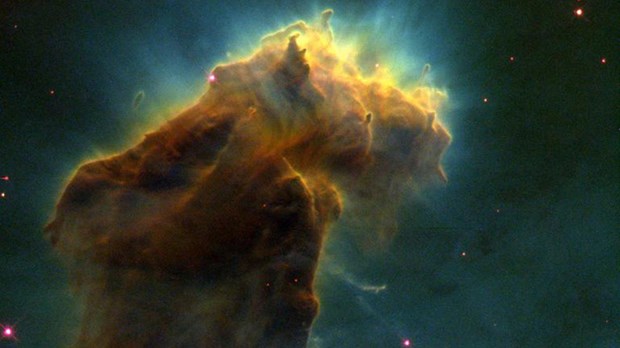 Dr. Jennifer Wiseman is a leading astrophysicist and a committed Christian. A senior scientist with a Ph.D. in astronomy from Harvard, Wiseman spoke with TCW about the dynamic relationship between faith and science.

The Genesis story of creation, with God resting on the seventh day, has suggested to some that God dusted off his hands and was done creating. But science suggests that, in a sense, creative activity continues to unfold. How would you describe God's role in his creation?

I think Scripture, as a whole, better describes God as the one who is responsible for all of creation, including its ongoing activity, rather than just "starting" it. Read Job 38-39 if you want a strong dose of God's own view of this! This does not mean that God is constantly tinkering with the laws of nature, but rather that he is responsible for the framework of those very laws and he upholds them. Those very laws and stable features of nature enable ongoing change and activity in the natural world and adaptations of life to suit changing environments. We should rejoice in that.

In fact, the writer of Hebrews mysteriously asserts that the universe was created through the Son of God, who also is the heir of the universe and sustains all things through his word (Hebrews 1:1-2). This would include both the physical realm and any realities beyond that, I believe, and gives us cause to both tremble and praise.

Throughout your journey as a scientist, at what points—if any—have you run against conflicts because you are a Christian?

I think Scripture, as a whole, better describes God as the one who is responsible for all of creation, including its ongoing activity, rather than just "starting" it.

I've never really had any major internal conflicts between my scientific understanding of the natural world and my faith in God as Creator and Sustainer. In fact, just the opposite: the more I learn about the natural world, the more my faith is enriched. I think this stems from my upbringing. Though I was raised with a reverent and traditional view of Scripture and its teachings on creation, I was also admonished to keep a sense of humility regarding Scripture and reminded that God hasn't revealed every detail of his workings in the Bible alone, nor was Scripture meant as a science text. So, therefore, the world of science was wide open for me as a blessed path for discovering more of those details.

How long, to your knowledge, has there been an apparent conflict between faith and science, and what do you think is at the root of this?

Historians tell me that the idea of a conflict between science and religious faith is actually a rather new phenomenon, proposed in the late nineteenth century. While most historians don't seem to put much credence in the conflict idea nowadays—since science and religion are generally addressing different kinds of questions and many scientists have been religious—you still run across this kind of conflict mindset sometimes in modern public discourse, though not so much within scientific circles.

When there seem to be conflicts between science and Scripture, for Bible-centered Christians, there is a need to understand better the kinds of questions the Bible addresses and the kinds of details that science, as a gift of God, is better attuned to address. However I think the real societal issue affecting many facets of the modern public sphere is whether scientific truth is the only kind of truth—whether science can ultimately explain everything and whether other kinds of knowledge are also valuable. Science is limited to characterizing the regular workings of the natural world, and does so very well, but I believe there are profound truths that science is just not equipped to address, such as questions of purpose, God, meaning, and how we should live our lives.

Recent evidence has allowed scientists to estimate, with more precision, that our planet is about 13.7 billion years old and that it started with a "Big Bang." Does the Big Bang theory conflict with your Christian faith?

The "Big Bang" label was originally a derogatory term, used in jest by a scientist who didn't believe the universe had such a pronounced "beginning"—with the related theological overtones—but rather had been around forever in a "steady state."

Over the past several decades, compelling evidence for a profound beginning to our universe is coming from several independent investigations. Everything from the expansion rate of the universe to the detection of leftover radiation from that initial burst of energy is pointing to a universe that began with powerful energy about 13.7 billion years ago, and has over time expanded and cooled, allowing the physical conversion of that energy into the atoms, stars, planets, and galaxies we know today. We now even imagine there might be other universes as well.

It really is so interesting that what you call a "profound beginning" points toward God, not away from God.

I think all of this understanding is profoundly in concert with Christian faith. First of all, I'm not one to think that we should attempt to glean scientific detail from the opening creation accounts in Genesis. They weren't written for that purpose. But nevertheless, it is quite interesting to note how the progressive acts of creation in Genesis parallel our scientific view and point to the worship of one Creator of all rather than the worship of nature.

In other words, the whole universe . . . was poised from the very beginning to produce what was eventually needed for the unfolding and sustaining of diverse life here on earth—even life that can offer praise back to God.

But more profound, I think, is the sense I get from astronomy of progression and even purpose in the universe. We have found that the initial burst of energy in the Big Bang, combined with expansion and cooling over the universe, enabled, over vast periods of time, the formation of atoms, galaxies, and stars, and that early stars themselves have produced heavier elements needed for subsequent formation of planets and stars like our sun, and even for the existence of carbon-based complex life. In other words, the whole universe, through the amazing "factories" we call stars, was poised from the very beginning to produce what was eventually needed for the unfolding and sustaining of diverse life here on earth—even life that can offer praise back to God. Even life that can embody God incarnate, as Christians believe Jesus is. In this, I infer radical providence!

You've remarked that in contrast to a mindset of relativism that discounts ultimate truth, the mindsets of science and Christian faith fit well together. Say more about that . . .

I have noticed that in many Christian fellowship groups on college campuses, students majoring in science or technical fields outnumber those in humanities. And contrary to what some might expect, the Christian groups at science-savvy places like MIT and Caltech are large, diverse, and thriving. Why is this?

I think it may be related to the comfort that both Christians and scientists have in the idea that there are universal realities that can be discovered, rather than a universal "relativism" that neutralizes any ultimate truth. As physicist-turned-priest John Polkinghorne so astutely noted, "Science and theology are both concerned with the search for truth. In consequence, they complement each other rather than contrast one another. Of course, the two disciplines focus on different dimensions of truth, but they share a common conviction that there is truth to be sought."

While there often is a cultural perception of a schism between faith and science, how would you encourage those who believe that all truth is God's truth?

First, I'd encourage us all to keep a sense of wonder and curiosity. It truly is amazing what we are discovering now, from the most distant galaxies in the universe to the interactions of the tiniest subatomic particles. Genomic mapping is opening up new vistas regarding the interconnectedness of life. If we believe that "all truth is God's truth," then finding out more details about the natural world through science should be seen as an endeavor that is pleasing to God, provided it is done in a way that is in keeping with God's ways.

Christians should allow scientific discovery to generate excitement and enhance praise and worship, because it enables a deeper appreciation of God's handiwork. We should encourage young people to consider careers in science as good and blessed paths of life.

Christians should allow scientific discovery to generate excitement and enhance praise and worship, because it enables a deeper appreciation of God's handiwork.

Then there are challenging questions of how advances in science and technology should be applied in the world. Christians should be well-informed by science, so as to be more knowledgeable and wise contributors to decisions on ethical uses of science and technology for the well-being of both people and animals on this planet, whose lives are impacted by what we do.

Related to this is the missional calling of service to others, especially the world's poor. We are supposed to be stewards of the earth (Genesis 2:15), and we can be better stewards and better servants to others if we know better what's happening in the natural world. This can include better understanding the pros and cons of different agricultural approaches, the global impacts of environmental pollution, and complex issues of medical ethics.

And then there is, I believe, the blessing of sharing the sheer spirit-lifting joy of exploration with others. I have a friend who is a scientist and a Christian, and her annual mission trip to an orphanage in Asia includes, primarily, sharing with the children what they most ask to hear about: space exploration!