. . . and it still hurts
By Vaneetha Rendall Risner 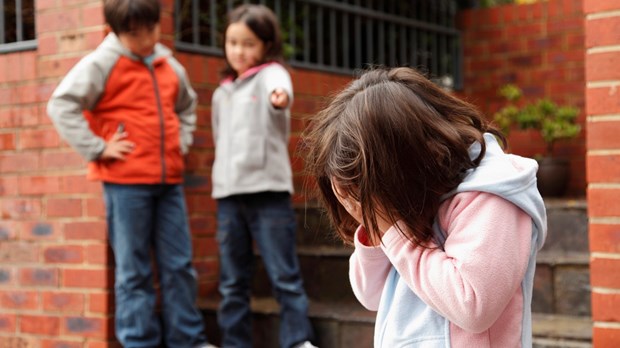 "Cripple. You’re a cripple. You don’t belong here!” Seconds after I heard the jeers, I felt the sting of gravel hitting my back. It scattered along the path, and I heard a group of boys laughing. I looked up to see who they were, but they were hidden from view.

As the pelting continued, a short, heavy-set boy stepped out of the shadows. He laughed as he imitated my pronounced limp and lightly pushed me in contempt. I tried to maintain my balance, but, within seconds, I collapsed on the pavement.

Immediately, the boys dispersed and it was silent. The area was deserted. I was alone.

I sat there for a minute, fighting back the tears and trying to collect my thoughts. I didn’t know who had done this, and I didn’t know why, but I was ashamed. Something was wrong with me.

Since I couldn’t get up without help, I waited to see if anyone would come by. Eventually, I dragged myself to a nearby rock and painstakingly pulled myself up. Relieved that no one saw me, I picked up my books, collected my composure, and began the short walk to my house.

I wasn’t going to cry. I wasn’t even going to look upset. I was going to be cheerful.

Determined to block out what happened, I ignored my aching body as I trudged home. When I neared the front door, my mother ran outside, beaming. “Wow! You walked home without your sister for the first time. I’m so proud of you!”

After we went inside and my mother poured me a glass of milk, I offered, “I earned a sticker today . . .”

I never told her what happened that day. I was too embarrassed. I was just seven years old.

Sadly, this was not an isolated incident of bullying from my childhood. Throughout grade school, I endured different types of bullying. Some of it subtle. Some of it overt. All of it humiliating. And I never talked about any of it.

I had contracted polio as an infant in India before my vaccination date. Almost immediately afterward, we moved to the West for my medical care. I spent the majority of my young life in and out of the hospital. By age 13, I had endured 21 operations.

Since I encountered cruelty so frequently, I almost came to expect it. No one ever stood up for me. Even when I was bullied in front of others, they looked the other way. They didn’t want to get involved—and I didn’t expect anything different.

Because I never told anyone about being harassed, I drew my own conclusions about what was happening. And over time, the power of those conclusions became magnified and deeply ingrained. I told myself that something was wrong with me. I was the outcast. I wasn’t worthwhile. These insecurities became my invisible wounds.

Since I encountered cruelty so frequently, I almost came to expect it. No one ever stood up for me.

I carried these wounds everywhere, long after the bullying stopped. Though I didn’t talk about it, I became a people-pleaser to compensate for my self-doubt. I felt I needed to be the most attentive friend, the funniest person at a party, and the most interesting storyteller because that was the only way I would ever be accepted. In my mind, no one would ever love me for me.

I compensated well and learned to make friends, but inside I was always angry. That anger melted when I met Jesus at age 16; at that time, through , God showed that he was going to use my handicap for his glory. Around the same time, a popular girl in my class befriended me and brought me into her circle of friends. With my newfound status, I mentally dissociated myself from that timid girl who was bullied.

I rarely thought about my childhood harassment again. After all, I had adjusted. I married, had a successful career, beautiful children, and close friends. There was no point in rehashing my past.

I didn’t think the bullying had affected me until a painful rejection in my adult life triggered a series of unexpected emotions. Though the situation was new, the feelings of inadequacy, of not measuring up, of being unimportant, felt strangely familiar. Rather than being angry at the person who hurt me, I felt shame that I was found unworthy. It was as though the scab had been ripped off my invisible wounds, leaving me bloody and raw all over again.

My feelings surprised me. I started journaling about my life in an effort to heal and sort out my emotions. As I wrote, long-buried memories came flooding back, carrying with them all the lies I had believed. The lie that my handicap made me sub-par. That I wasn’t intrinsically valuable. That I was defective.

As an adult I could see how I had been mistreated. But as a child I had thought it was normal, expected—maybe even my fault. As I remembered my childhood conclusions, I realized that perhaps the past was significant after all. Consciously or subconsciously, my past had molded me.

Though the situation was new, the feelings of inadequacy, of not measuring up, of being unimportant, felt strangely familiar.

I shared my story with a friend as I searched for understanding. I was hesitant at first, not sure if it would be too humiliating to tell someone. But as I recounted what had happened, and saw tears in my friend’s eyes, something broke. Sharing it was more than validating; it was strangely freeing.

Piecing together my suppressed memories, I regretted not telling my family about my struggles. I had been too embarrassed to say anything at the time. I didn’t want them to know I was unhappy. That kids didn’t like me. That I was tormented. My parents were always so proud of me, and I thought it would have upset them to know about it. Now I see they could have supported me, spoken truth, and shown me I wasn’t to blame.

As my past came to the light, something started to change. The lies from my past ceased to hold the same power over me. I was not to blame for what happened. What the bullies did and said to me wasn’t really about me. It was about them.

I was not to blame for what happened. What the bullies did and said to me wasn’t really about me. It was about them.

I spent time in prayer, asking God to show me truth. I needed to know who I really was. He showed me the exquisite beauty of the gospel. I saw that I am not defined by what other people have said or done to me. I am defined by who I am in Christ. He alone can tell me who I am. And he tells me that I am loved. Accepted. Beautiful.

While I still struggle sporadically with insecurity, I see God’s restorative work in my life. My invisible wounds are healing, leaving beautiful scars. According to the dictionary, a scar is “a mark left by a healed wound.” In the hands of Jesus, my wounds have been healed. Only the scar remains, a testimony to his transforming work in me.

God has used the bullying in my life to shape me into who I am. He has given me compassion, resilience, and grace because of it. He has taught me to trust him. Indeed, God’s promise to me at age 16 is being fulfilled, for he is using my handicap for his glory. To which I say, “Amen.”