This is about more than the KKK.
Margot Starbuck 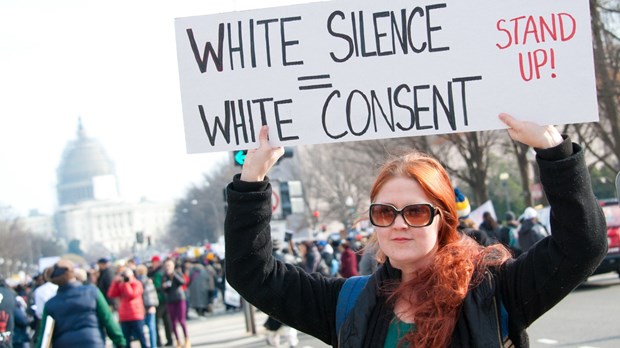 Granting my summertime birthday wish, my three teens deigned to spend time with me floating on rafts at a local quarry, playing a version of 20 Questions. Each of us would think of a person—any human being on the planet—and the rest would have 20 questions to guess who it was.

Round after round, I began to notice how frequently we drummed up white males.

“No more white males!” I ranted, playfully. “Come on, people! Get creative!”

As we were playing, a black teen from my kids’ school swam over and joined our game. (Polite, savvy, he chose the same kinds of “people” we were choosing.)

The data rolling off our tongues—among one black, one Indian, and three white folks all raised in America—confirmed what I suspected: The message many of us have inadvertently internalized is that to be a person is to be an American white male. The insidious, hidden assumption is that everything else—having too much melanin, not enough testosterone, or speaking a non-English language—is somehow less than fully human.

That Dylan Roof massacred nine black people in Charleston five days after our trip to the quarry is, as Austin Channing Brown has noted, the “logical conclusion” of the white supremacist ideology exposed in our little quarry game. (Other victims of the same wily logic have been Middle Eastern, Latino and Asian.)

Does “white supremacist ideology” feel too strongly worded for a benign game of 20 Questions? If so, I get that. I really do.

For a lot of white Americans (myself included), it’s both an intellectual stretch and, if we’re honest, an emotional one to admit that “white supremacy” could in any way apply to us. After all, horrific crimes such as rape, torture, and murder have been committed by white hate groups blatantly espousing white supremacist ideology. But a number of Christian women from whom I try to learn—Chanequa Walker-Barnes, Austin Channing Brown and Jennifer Bailey, among others—have challenged me to consider the many ways those ideas still impact the daily living of every person in our country. In fact, the wisdom and voices of these prophetic women are the very reason that I’d used my lighthearted words to point out our unwitting connection between “personhood” and “white male.”

These Christian women have challenged me to see that this isn’t just about fringe lunatics or hate groups. The cultural and historical impact of white supremacist thinking stretches beyond lynchings and white robes and KKK cross-burnings. It also shows up in less recognizable ways—in daily situations that some refer to as “white privilege.”

Because these leaders I respect have spoken up, not a day passes that I don’t notice the subtle benefits afforded to me simply by virtue of being born white.

It’s why I don’t need a strategy to be treated with respect when I shop at the mall. I don’t have to think about dressing well or making my first purchase from the nicest store—Nordstrom’s, Neiman’s, Saks—so that I’ll be taken seriously as a customer. In fact, if I walk in wearing cut-off jeans and combat boots, I still expect and receive respect.

It’s why people who look like me never end up in neighborhood watch newsletters, labelled as “suspicious” or “potentially dangerous” so others can BOLO (Be on the Lookout). In fact, I could creep down any driveway in town and folks would naturally assume I was harmless.

It’s why I don’t have to worry that a police officer will place his hand on his gun when he pulls me over for a traffic stop. And it’s why, if he did, I’d assume he was just polishing it.

It’s why my white son and I can drink our sodas in line at the grocery store before we pay for them. And it’s why his black friends know not to.

It’s why, even after Charleston, I don’t really feel afraid when someone of a race other than my own visits my church’s Wednesday evening Bible Study.

On many days the problems of racism and injustice in America feel irreparable. But there are rare days—like the one when the brave Bree Newsome climbed the South Carolina flagpole reciting Psalm 23 as she was being led away in handcuffs—that I harbor a shred of hope that change is possible.

Denying the palpable reality of racial injustice, choosing the comfort of pretending that we “don’t see color,” or indignantly insisting that we’re “not racist” isn’t going to move us forward. What will move us forward are the brave individuals, of all hues, who are willing to speak the truth by admitting, “I do see color” or “I do stereotype others” or “I do have racist thoughts that I’m trying not to act on.” Or even “I do see the inequity in the way I’m treated and the opportunities I have.”

Recently my mostly-white church was invited by a sister mostly-black church to pray for racial healing in our nation and in our community. And though we’ve shared meals and prayer and ministry in their church basement before, these meetings have been different. We enter the space reverently. We listen carefully. We speak more carefully. We weep with those who weep. Stories of pain and violence—along with hopes for a different future—have been shared. Healing, in our community, has begun not by denying our experiences but by naming and identifying them clearly.