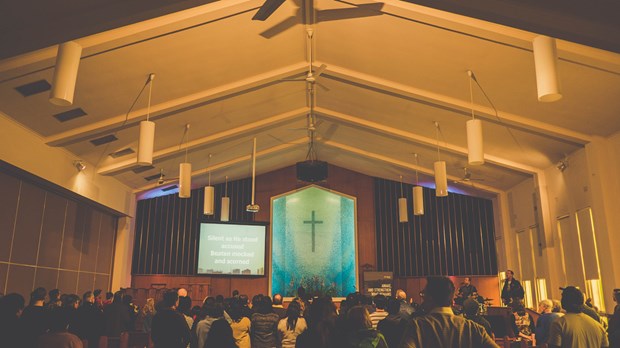 News about the sharp decline in the number of Americans who self-identify as Christians shook the community of faith this past year. The Pew Research Center report “America’s Changing Religious Landscape,” released May 2015, revealed that from 2007 to 2014, Americans who self-identify as Christian declined from 78.4 percent of respondents to 70.6 percent.

On the other hand, nones (those who identify with no particular religion) grew from 16.1 percent to 22.8 percent in that same time period. Atheists and agnostics grew from 4 percent to 7.1 percent. The sharp decline in the number of people who identify with the Christian faith is particularly troubling to those of us who are Christian mothers. None of us likes to consider the possibility that our child may grow up to forsake the faith, but many families have experienced exactly that scenario.

These statistics may lead us to ask if there is any good news to be found. While many walk away, do those who stay in the community of faith exhibit deeper discipleship? And how are we to effectively reach a culture that no longer listens to us? The answers are a bit complicated.

A Crisis of Discipleship

A later Pew report, released November 2015, said this: “By some conventional measures, religiously affiliated Americans are, on average, even more devout than they were a few years ago.” Though the percentage of those who self-identify as Christian is smaller, among those who do the rate of worship attendance held relatively steady over the past seven years. There were modest rates of growth among Christians in several key faith practices as well: weekly Bible study or prayer group participation grew from 28 percent to 32 percent, daily prayer rose from 66 percent to 68 percent, weekly Bible reading outside of worship services also grew from 41 percent to 45 percent.

This data is a bit encouraging, but mere participation in faith-oriented activities doesn’t necessarily result in deepening discipleship. Also in November 2015, The Navigators released a Barna Group study they had commissioned, The State of Discipleship, which was a comprehensive study of US churches, leaders, and Christian adults. The study defined discipleship as personal transformation that leads a person to become more like Jesus.

Of the church and ministry leaders surveyed, only 1 percent said today’s churches are doing very well at producing spiritual growth and Christlikeness in new and young believers, according to Lindy Black, Associate US Director of The Navigators. Only 20 percent of respondents from the general Christian population considered themselves to be participating in discipleship activities. “That doesn’t bode well for the future,” Black says. She notes that busyness, lack of commitment to discipleship, and attempts to grow in one’s faith alone instead of in community surfaced as major problems in the American church. Black also says that the gap between Christians and the rest of society is becoming wider, making it more difficult to invite people into a relationship with Jesus.

Mission in a Secularized Context

The increasing secularization of American society is reminiscent of what has occurred in Europe. Jo Saxton (advisor to Today’s Christian Woman; board chair at 3DM, a missional discipleship organization; and co-pastor at a Twin Cities congregation) can speak to what it is like to reach people with the gospel in such a culture.

Saxton grew up as the child of Nigerian immigrant parents in Great Britain. At age nine she came to faith through an inner-city children’s ministry. “The way [the Christians] lived was just really compelling. The way they talked about who Jesus could be in your life was mind-blowing,” Saxton says.

Later, she attended college and became involved with ministry in Sheffield, England, where less than 2 percent of the population attended church at the time. She says that organized religion was seen as “less than irrelevant” because by that time, generations of people had been disengaged from church. However, Saxton says that sharing her faith with others was an integral part of how she was taught to be a disciple. It didn’t faze her to live in a secular or hostile culture; it energized her.

Even so, Saxton readily acknowledges that many Christians today are dealing with grief about their declining influence in society. “I can understand how wanting to hearken back to a previous day may be a part of our story,” she says. Yet she encourages Christians to see the diversity of people God has placed in our cities and see this as an opportunity for evangelism.

Our globalized society and the interconnectedness created by digital technology mean that the mission field is not just across an ocean anymore—it is right here too. God’s mission of redemption and new creation hasn’t changed. And though the work of penetrating our society with good news is becoming more difficult, that shouldn’t deter us from undertaking it.

“We actually get the privilege and the opportunity to share our faith with a diverse group of people,” Saxton says. “In some ways, we’ve forgotten the privilege.”

Black offers the encouragement that despite increased secularization and the decentralization of religious authority, relational discipleship still works as well as it did in the days of the early church. She points out that personal relationships can bridge the gap that exists between the church and the culture, allowing us to share good news with those who have no religious identity.

If we are to embrace this moment of mission, it will require focusing more on the privileges of discipleship and mission than on the privileges of comfort and cultural dominance. It will require a willingness to love and engage with those who are apathetic—even hostile—to Christianity. Anger is often a way people exhibit fear or pain, Saxton notes, adding, “What does it say about us when we’re not prepared to engage with somebody’s fear or pain?”

Creating Christian Community for Our Children

As for discipling our children in the faith, Black points out that children learn by example, and that example must include modeling Christian community. “We need the body. We need other believers, and parents can model that,” Black says. She further notes that parents often unwittingly contribute to a self-orientation and insulated living that creates unhealthy spirituality in children by over-focusing on family. Regardless of how far the culture moves away from Christianity, parents can help develop authentic faith in their children by making them part of a faith community.

The current cultural context requires a shift in thinking about discipleship in the American church, but that might help reorient us to our true mission. The apostle Paul wrote, “God chose the lowly things of this world and the despised things—and the things that are not—to nullify the things that are, so that no one may boast before him. It is because of him that you are in Christ Jesus, who has become for us wisdom from God—that is, our righteousness, holiness and redemption” (1 Corinthians 1:28–30, NIV).

Declining cultural influence is not an obstacle to mission and discipleship; it is the place where we are called to do mission and disciple our children. This is an opportunity to stop expecting success in American terms and instead expect to meet God in the lowly, the small, the unexpected. It’s an opportunity to, like Jesus, empty ourselves of our rights (Philippians 2:1–11).

We have the opportunity to redefine the church as a redemptive force—serving the broken and expecting nothing in return—and as a community of Christians who are compatriots in our walk of faith.

“Look again with fresh eyes,” Saxton says. “What would it look like to see yourself being sent into the world you’re so afraid of?”

God is already in that world—and in our culture—preparing opportunities for us. Rather than fearing the changing culture, let’s embrace the opportunity of our time.

Rebecca Florence Miller is a freelance writer and editor, and a blogger at Patheos. You can also find her at RebeccaFlorenceMiller.wordpress.com and on Twitter at @flatheadmama.